Thinking Outside the Oppresor's Box: Courtney Milan's THE HEIRESS EFFECT

As a young adolescent, I spent most of my afternoons either reading (largely romance fiction) or watching soap operas. Plots of both genres often rely on the either/or dilemma for their emotional charge: Pretend to be my lover, oh sweet young girl, says the evil villain, or I'll tell your true love that you once worked as a hooker (to support your dying mother, of course, but I won't let that relevant detail slip). Break up with your girlfriend, the conniving villainess orders our rough-around-the-edges-but-truehearted hero, or I'll play on your younger brother's penchant for gambling to ruin your family's finances. One category romance from this period (late 70's/early 80s) that still sticks in my mind featured an overbearing brother informing the heroine she would have to pretend to be his fiancée, or he'd reveal to his sister that the heroine had been dating said sister's fiancé while the poor girl had been recuperating from illness in the hospital (no matter that she'd had no idea the smarmy fiancé was engaged, and was trying to break up with him anyway)*. Soap opera protagonists, just like many heroes and heroines of romance, are put in a powerless position, faced with the untenable either/or formulated to keep true lovers apart (and keep viewers, and readers, on the edge of their seats, waiting to see how they'll ever get back together).

Courtney Milan presents the male lead of her most recent Victorian historical with just such an appalling either/or. Oliver Marshall, the bastard son of a duke, has fought most of his life to make a place for himself in the world of the privileged. As a schoolboy, he often fought back against those with more power, those who teased him for his working-class roots and his lack of knowledge about acceptable behavior among England's elite. But years of fighting can wear even the best man down; as an adult, Oliver has learned to be more politic, biting his tongue and currying favor, biding his time until he earns his own share of power and can make the men who abused their power, and forced him to grovel, grovel in their own turn.

Oliver's most fervent wish—to extend the vote to the working class, in particular to his beloved father (not the duke, but the man who raised him)—seems on the cusp of achievement, if only he can persuade former schoolfellow and political powerhouse the Marquess of Bradenton to switch his vote, and the votes of the men who typically side with him in Parliament. But Bradenton is wary about ceding his vote, not only because he believes that every man has his rightful place in society, but because he isn't sure Oliver shares this view. In order to convince himself that his potential ally is "going to be part of the proper order.... That he'll know his place, and expect everyone to be in theirs," (34) Bradenton demands something in return: Oliver's willingness to publicly humiliate a woman who keeps stepping outside her designated social place.

Heiress Jane Fairfield has cut a wide swath through Cambridge society, but hardly one that any other young lady would envy. Clothes dripping with ostentation designed to signal her abundant wealth, tongue wagging with entirely unintentional insults ("She asked Whitting about his studies, and when he made a wry comment about preferring to concentrate his efforts on the study of liquids, she stared at him. 'How surprising,' Her eyes were very round. 'I had not thought you to have the capacity of intellect to read physics!'" [17]), Jane has come to be known as the "Feather Heiress," for "being around her is like being beaten to death with a feather" (11). Her unintentional snubs have more than rubbed Lord Bradenton the wrong way; they've so offended him that he wants her gone, banished from Cambridge society, no longer the sharp pebble in his oh-so-proper shoe. Too lofty to undertake his own dirty work, Bradenton tasks Oliver with the job, holding out the carrot of his Parliamentary vote as recompense.

What makes Milan's novel so very interesting is that even while Oliver protests, insisting not only to Bradenton and his colleagues, but also to himself, that he'd never accept the Marquess's offer, inside he's not entirely certain:

"And as for you, Marshall..." Bradenton looked at Oliver. "Take the time you need to salve your conscience. To tell yourself whatever it is you need to make this palatable. You'll be doing her a favor, you know."
No, Oliver thought. Not a favor. And I'm not doing it.
But that sick pit in his stomach felt differently.
Yes, it whispered. Yes, you are.  (35)

Oliver's dilemma grows even worse when he comes to realize that Jane Fairfield is not the simpleton she pretends to be. Her feather-wielding is a deliberate disguise, one devised in order to scare away suitors for vital reasons of her own. But even as he works to befriend the friendless heiress, Oliver is honest enough to realize that he'd be doing the same, whether he intends ultimately to betray her or not. He's committed smaller betrayals in the past; can he rely on his common decency to keep his ambition from pushing him to make one last betrayal, no matter how inexcusable?

This is the point in the soap opera, or the traditional romance novel, when the protagonist would be forced to make the choice: refuse to give in to the evil villain, and watch those you love come to hate you; sacrifice yourself and your principles, and watch your own dreams fall apart at your feet.

But neither Jane Fairfield, nor Courtney Milan, believe in the inevitability of the either/or. In fact, this novel suggests, when we accede to the either/or terms that oppressors set, we help contribute to our own oppression. Jane urges Oliver, and through him, readers, to look beyond the choices those in power would force upon him, to imagine a third way, a path that simultaneously allows him to keep his self-respect and achieve his goals. And each of the story's sub-plots, most focusing on patriarchal men thinking they have not only the responsibility, but the right, to make decisions on behalf of younger women, echo this theme. Rarely is all power held in one villain's hands; look beyond the lies that keep your fellow oppressed at odds, find allies, and work together to devise a different solution to the problem, and you'll go a long way toward knocking down not only class privilege, but gender and racial privilege as well.

* If anyone knows the title of this one (a Harlequin Presents? Or a Silhouette?), I'd love to find it again! 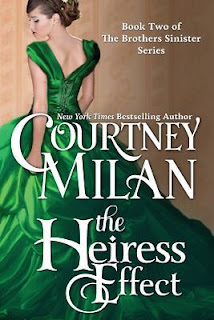 Courtney Milan, The Heiress Effect.
Self-published. 2013
Posted by Jackie C. Horne at 9:00 AM