How I Started Writing Feminist Books: A Guest Post by Courtney Milan

Please join me in welcoming guest blogger Courtney Milan, whose Victorian-set historical romances have often been featured in reviews here on RNFF. In this post, she reveals the surprising origins of the feminism in her writing.

I write books out of order, so one of the very first things I wrote (and I wrote this in 2008) was a scene (not in the book any longer, for obvious reasons) where Ash first kisses Margaret. Here it is:

She gathered that preternatural calm about herself. Despite her pale beauty, it descended on her like a cloak of darkness. And he wanted to crack it, to shake it up, to make her respond with something other than the mere hint of a whisper.
He strode forward until he bracketed her against the wall. Her calm slipped, just a tad. Ash reached down and touched her face. Her cheek was warm and soft in his hand, and her lips parted just a fraction. She said not a word, though—just looked up at him.
"Please," she said. "Don't—"
But he did. He wanted her, and damn, he was going to kiss her.

So there you are. That's Ash as I initially planned him.

And then someone (@redrobinreader) on Twitter complained that it was creepy that in every historical romance, the hero tells the heroine how turned on he is by her pale skin. 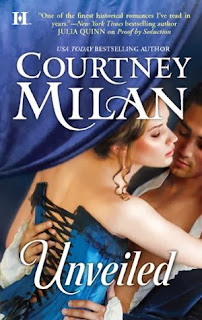 There's nothing wrong with pale skin, and yes, Victorians did have a pale skin fetish. But when it's the only color that gets praised, that's seriously messed up. And since I don't have pale skin myself, this complaint led to a bit of introspection on my part. Why was I accepting this without question? Why was I writing this way? Why was I writing something I didn't believe, and what did it say that I'd internalized something like that enough to regurgitate it without thinking?

So the scene I wrote after that was a kind of response to how I felt about that moment. This was the scene where Ash says:

I hadn't expected to write that. I hadn't planned to write it. The book I had been planning to write had no room for that kind of Ash. But when I wrote it, it felt right in a way that nothing I had ever written before had. Writing those words changed Ash, changed the book, changed what I write about, and changed who I am as a writer.

And you know what it was that pushed me over the edge into writing books that are more feminist? It wasn't feminism directly. It was race.

Even though the race part has rarely shown up directly labeled as such in my books to date, the fact that I am half-Asian, and have had to deal with stereotypes that I should therefore be more submissive, that I've had to deal with being sexualized because of my race, the long and very complicated relationship I have with my mother... These are questions that, for me, are so bound up in the question of who I am as a woman that I don't think I can separate them, and they're things that show up in my books, over and over.

I started paying attention to the feminist content in my books because of a question of race.

The moral of the story is, if something's bugging you, complain about it. You might not reach the person you're talking about, but someone else might hear, and it'll make a difference. 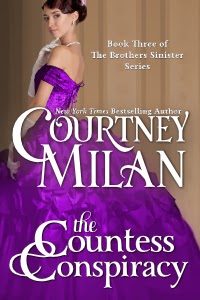 Courtney Milan's debut novel, Proof by Seduction, was published in 2010. Since then, her books have received widespread praise, including starred reviews from Publishers Weekly and Booklist. She's been a New York Times and a USA Today Bestseller, a RITA® finalist, and an RT Reviewer's Choice nominee. Her latest book, just released this month, is The Countess Conspiracy, book 3 in the Brothers Sinister series.