Fighting for Women's Rights: A MAD, WICKED FOLLY and THE SUFFRAGETTE SCANDAL

I'm guessing that for many American kids, their first introduction to the history of women's suffrage comes not from a history textbook, but from a Disney film. In a scene not included in P. L. Travers' original novel, the movie Mary Poppins opens with Edwardian mother Mrs. Banks arriving home from a political rally for women's suffrage, excitedly breaking in to song as she relates the day's doings (see full lyrics here.) One protester has chained herself to the Prime Minster's carriage, another sings while being carted off to gaol, scattering pro-suffrage literature in her wake, and the otherwise unidentified "Missus Pankhurst has been clapped in irons again!" she informs her parlourmaid, cook, and governess, adorning each with her own "Votes for Women" sash as she dances them around the room. 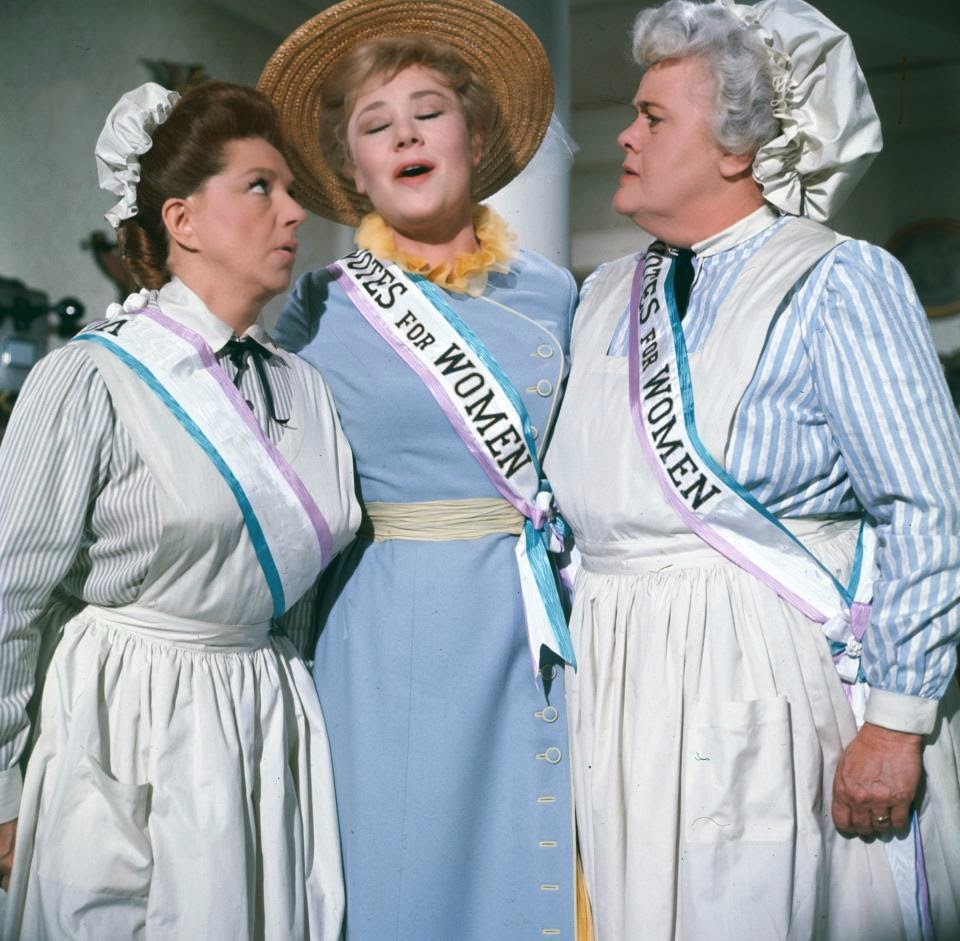 The servants, alas, have news of their own for Mrs. Banks: the children have gone missing, and the governess is resigning her post. Women's suffrage comes across both empowering and problematic, the struggle for the right to vote clearly energizing and enlivening Mrs. Banks, but also taking a married woman's attention away from where it rightfully belongs: on her household and her children.

Historical romance has often taken up the figure of the bluestocking (the educated woman), or at least the woman fighting for equality in the face of a doubting, often disparaging, masculine culture (see All About Romance's list of "Bluestockings, Independent Misses, & Feminists" and the list of "Women's Rights in Romance Novels" on Goodreads). But I hadn't come across any that feature an actual suffragette as a heroine until this summer, when I had the pleasure of reading not just one, but two, suffragette romances, one written for YA's, the other intended for the Historical Romance market. And neither, surprisingly enough, creates conflict by placing its hero and heroine in opposing ideological camps.

In an 1870 letter, reacting to the news "that Viscountess Amberley had become president of the Bristol and West of England Women's Suffrage Society and had addressed a... public meeting on the subject," Queen Victoria of England wrote:

I am most anxious to enlist everyone who can speak or write to join in checking this mad, wicked folly of "Women's Rights," with all its attendant horrors.... Were women to "unsex" themselves by claiming equality with men, they would become the most hateful, heathen, and disgusting of beings and would surely perish without male protection. (http://en.wikiquote.org/wiki/Victoria_of_the_United_Kingdom) 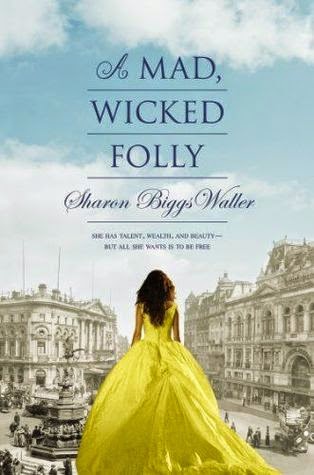 Victoria Darling, the heroine of Sharon Biggs Waller's YA historical A Mad, Wicked Folly, initially has little interest in the political activists urging the British government to grant women the vote—except as potential subjects for the portfolio she is preparing for her application to the Royal College of Art. She's even taken for an anti-suffragist cartoonist by a sympathetic-to-the-cause police constable during a suffrage protest outside of Parliament. But privileged Victoria gradually discovers she has more in common with the women and men fighting for an expansion of the vote that she ever imagined. Meeting the artist Sylvia Pankhurst (daughter of the activist Emmeline Pankhurst referred to in Mrs. Banks' song), learning how art can play a role in political protest, and discovering just how little choice the upward mobility of her socially ambitious family allows her, even regarding her art, ultimately leads Victoria down a far different ideological path than her royal namesake. As a friend encourages her to imagine, freedom lies not only in personal choice, but in economic independence:

"How about loving who you want instead of settling for someone your parents have chosen for you? Wouldn't it be a real lollapalooza to bring him home and say, 'Ma and Pa, this is my guy and if you don't like him... well, then, too bad. I don't need your money or anyone's money. I don't even need him to have money, 'cause I got my own.'" (315).

Caught between two potential suitors, Victoria ends up choosing the course that will allow her to pursue her art. That she wins the love of her dreams in the process makes for a tidy, but satisfyingly happy ending to this informative dip into early twentieth-century women's political history.

Courtney Milan's The Suffragette Scandal takes place a few decades before Waller's A Mad, Wicked Folly, in 1877, before the word "suffragette" was even part of common English parlance.  But Frederica "Free" Marshall, who played minor but memorable roles in earlier stories in the "Brother Sinister" series, is far more committed to women's rights than either Victoria Darling or Victoria regina. James Delacey, a man waiting to be officially declared Viscount Claridge (his elder brother having disappeared nearly seven years earlier), is infuriated by Free's refusal to become his mistress. But Milan, like Waller, refuses to cast a misogynist who must be persuaded through love of the wrongness of his beliefs in the role of hero. Instead, it is Delacey's mysterious older brother Edward, now calling himself Edward Clark, who becomes embroiled in the fate of the Women's Free Press: by women, about women, and for women, the newspaper funded and edited by Free. Drawn in initially to help a friend, now the paper's "Ask a Man" columnist, from being unfairly smeared by his vengeful brother, Edward, a liar, forger, and flirt extraordinaire, declares Miss Marshall "in need of a scoundrel," and offers her his services accordingly. Each protecting their own secrets and vulnerabilities while keeping one step ahead of the other, Free and Edward warily join forces, cannily defeating James' initial plans to discredit the paper. But English peers, even potential ones, wield real power, and James' plans for vengeance are far from scuttled: 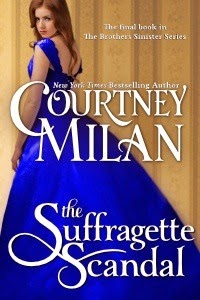 "So far as I am aware, the only circumstance of note is that you made me an offensive proposition and I refused. From that we come to all of this?"
His hands clenched at his sides. "I've already forgotten that," he said coldly. "I do not wish to think of it."
"Of course you don't want to think of it," Free told him. "It's obvious that you don't want to think at all. But despite your carefully cultivated ignorance, you'll have to comprehend that a woman has a right to say no."
He bristled further. "That's precisely it. You said no, so that is what I wish for you. No newspaper, no voice, no reputation, no independence." He looked away. "No is apparently all you understand, and so I've made sure that when I talk to you, I use language that you can interpret." (126).

Like Waller, Milan presents a detailed, accurate, and compelling historical background of women's struggles for equal rights not just under the law, but in the minds of their arrogant "superiors." Milan has never been one to shy away from the more distasteful (to current-day audiences) of Victorian views, particularly those towards women. But by placing them in the mouths of her villains rather than her heroes, she eschews the game of personal male reform through love so common in more traditional historical romances. Part of what makes Edward and Free's romance so tender and compelling is Free's realization that it's not her job to fix Edward. Instead, she must grant him the freedom, and the time, to reform himself—changing not outdated political beliefs, but coming to terms with the traumas and betrayals in his past, and recognizing the limits his own cynicism and disillusionment have imposed upon him. Only then can he become a worthy partner for Free, and embrace the far more satisfying work of political reform to which Free has devoted her life, reform made all the sweeter when both members of a couple believe wholeheartedly in their work.

At the end of Disney's Mary Poppins, Mrs. Banks symbolically gives up her "Votes for Women" sash, transforming it into the tail of a kite repaired by her now child-friendly husband. A rejection of her feminism, I often thought, until someone pointed out that "Votes for Women" was now flying high above London, its political message visible for all to see.

Let me offer my own kite, then, with its own words of praise for Waller and Milan: "Well done, Sister Suffragettes!"