The trope of the redeemed rake is a staple of historical romance. But the rake of romance is very rarely a rake in the sense that people of the past meant the word: "a fashionable or stylish man of dissolute or promiscuous habits." Or at least, the emphasis tends to be far more on the "promiscuous" side of things, than on the "dissolute." A rakish romance hero is one who is sexually experienced (a good quality in the eyes of romance readers), rather one who is characterized by the negative qualities of licentiousness, profligacy, or debauchery. Admiration for a "young blood," another name for the rake, rarely takes into consideration the blood (metaphorical and actual) such a man is likely to leave in his wake.

Which is why I'm always excited when I come across the one or two historical romances published each year that feature rakes who are rakish in both senses of the word: lauded for their sexual exploits and disdained for the lack of morals which has engendered them. And Alfred Lamb, Earl of Kingston, the male lead in the fourth book in Erin Satie's Victorian romance series, No Better Angels, is most definitely a romance rake of the more uncommon type.

Readers of Satie's earlier books have met Kingston in the guise of antagonist, and so will be well aware that the hero of The Young Blood is not heroic in any real sense of the word. But for those for whom this is a first Satie read, the author makes it clear from the book's opening lines that here is a man who is about as uninterested in living the life exemplary as it is possible to be: "He hadn't bothered with the fancy dress. For a long time—most of his life, really—Alfred Lamb, Earl of Kingston, had done the absolute minimum necessary to get by. More and more often, even that was beyond him" (Kindle Loc 36).

"Getting by" for Alfie consists largely of charming different women into bed—or onto a couch, or down to the floor—drowning the griefs of his youth in physical pleasure. He has a way with the ladies, a bad habit, as even he himself has come to see it. A way of slipping past their defenses, of seeing what it is they truly desire, then giving it to them—or at least, some semblance of it: "Show her an idealized version of herself, give her a magic mirror that reflected just the right amount of truth, and she would treat the painter as an oracle. She would want more; she would reveal herself, make herself vulnerable, to have it" (299). Alfie knows his behavior is selfish, but at least he is no longer suffocating on his own despair.

Alfie, too, lets women see just enough of himself to entice them—but without making himself the least bit vulnerable:

"Lord Kingston," she murmured, all wonder and sympathy. "I believe you've been hurt."
"Is it so obvious?" Alfie felt his lips twist. He knew the answer to this question: yes. An alarming number of women scented it on him.
What's more, it only whetted their appetites. They seemed to enjoy the fantasy of a rake driven by heartbreak. As though he were one shard short of being whole again and thought the missing piece must be hiding under a lady's skirt.
He gathered that many women hoped his loyalties would transfer to a new target midcoitus. And then, broken heart healed, the fullness of love would drive him with the same intensity as the lack of it had. He'd be a perfect mate.
These women were impressed by the dogged persistence of his decade-long pursuit. It ought to worry them. Any method that failed so consistently ought to be abandoned, or at least revised.
But really, they ought to have asked themselves a completely different question: where had the object of his affections disappeared to? What did she know that they didn't? Because if she had gone, never to return, it wasn't because he was so damned loving.
He had never been anyone's knight in shining armor.... The misunderstanding was staggering, really. (558)

To show any of the women he lies with anything beyond the mere air of vulnerability would be to defeat the purpose of the game: to drown the sorrows of his many painful losses in sensual pleasure.

Alfie thinks because he warns women about his true colors, tells them that they shouldn't sleep with him, that it is their fault, not his, if they do not heed his warnings:

"I should never have—"
"Which I told he last night," he interrupted. "Several times."
She gaped at him, the blood slowly draining out of her face. It never helped to warn them. (839) 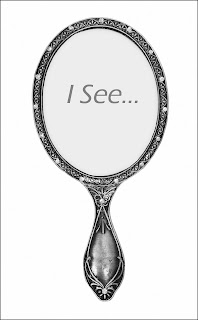 It takes a curious bystander, one as brusque as Alfie is charming, to hold up a magic mirror to him, one that begins to show him not an idealized version of himself, but rather the havoc his own behavior is causing in the lives of others:

"Because it was your fault."
"It was?"
"I saw you talking to her at the Finlay-Coateses', before I left."
"And?"
"If there is any truth to these rumors, then you've caused her great harm. Altered her life for the worse—perhaps ruined it entirely."
"Helen Fairbanks is free to make her own choices. Good or ill."
"That doesn't follow at all, Lord Kingston," said Sabine. "She might have chosen to spend one evening with you; that doesn't make her free." (1196)

Sabine Banchory, the daughter of a duke, has been unhappily married for years. But intelligent, dignified Sabine holds tight to self-respect, something that Alfie has never been able to grasp, and does not deign to show her unhappiness in public. It is in nature to reserve all the hardest tasks to herself; she believes that "work, persistent and unstinting effort applied over time, was the secret to a life well-lived and the only route to greatness" (756). And if it is work to put up with her gambling, philandering husband, well, that is what she will do. And she will not hesitate to chastise a man whose selfishness causes harm to others. Even when that man has set his sights on seducing her.

Sabine's magic mirror may start Alfie thinking, but it a lot more to shock him out of his self-absorption. A horrific act of violence. A debt incurred, a repayment necessitated. And the slow, drawn-out tension of a seduction unsatisfied, taut with desire.

I've been a fan of Satie's gorgeous writing style from the start of her career. But with this final book in her inaugural series, she proves that she is as capable of crafting a compelling storyline replete with sexual tension as she is of penning gorgeous prose. The Young Blood could well be the best historical romance you'll read all year. 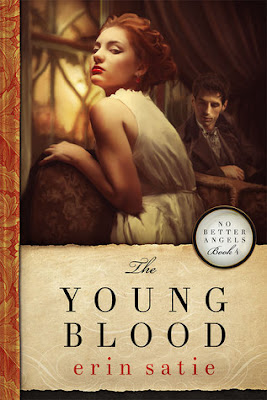