When I taught a class on Science Fiction and Fantasy for children and young adults (during my days as a professor at Simmons College), I spent a lot more time reading SF than I do today. In part because my interests now have shifted to romance, but also because so often hard SF does not focus on interpersonal relationships, while most SF romance does not satisfy my desire, grounded in years of fantasy and SF reading, to dwell in a thoughtfully created secondary world where ideas, not just personal relationships, matter. Which explains my delight when I heard that Alex Beecroft, one of my favorite contemporary and historical romance writers, had jumped on the SF ship.

The versatile Beecroft's latest, Lioness of Cygnus Five, is set in a space-faring future, after humans on Earth have spread far and wide throughout the galaxies. Spreading along with them is the human penchant for fighting between different cultural groups, groups that base their identities on opposite sets of beliefs. One of Lioness's protagonists is a member of the "The Kingdom," a low tech-Luddite religious force determined to colonize all other human planets for their own good. Aurora Campos was once the most gifted and revered "holy warrior" among The Kingdom's soldiers, touted by many as a new Joan of Arc, but a very public moral mistake has left her dishonored and disgraced. Shunted off to the hinterlands, she now only rates command of a lowly transport ship, staffed by other Kingdom "freaks and rejects," with a cargo of convicts bound for the prison planet Cygnus Five.

One of those prisoners is wily Bryant Jones, who has suffered his own fall from grace. After his planet, part of the "Source," a godless, secular, and technologically advanced culture, is conquered by The Kingdom, his work as a highly reputable persona surgeon (a kind of super high tech plastic surgeon) is regarded as criminal. When one of his underground surgeries is interrupted and his patient dies because of it, Bryant is convicted of murder, and bound over to be exiled to the prison colony of Cygnus Five. But Bryant is determined to use his superior technological knowledge to take control over Captain Campos's ship before they reach the planet.

At the start of the novel, neither Jones nor Campos has much respect for the other. Jones thinks of Campos, "She was an odd-looking woman, somewhere between olive-skinned beauty and prize-fighting troll"; "it was kind of pathetic seeing a woman so butch make any gestures at all in the direction of femininity" (114, 223). For her part, while Campos finds Jones a bit more physically appealing, she still regards him as a distasteful threat:

A beanpole of a man. Black, like Mboge [her 2nd in command] but a paler shade, his oval face freckled all over like a plover's egg and his shaggy hair, which curled naturally into tight spiraled ringlets, worn like a bouncy cloud.... Yet when she looked at him, fragility was the last thing she saw. No that was a snake. A little brown vine snake of the kind that had been harmless when it left Earth, but had developed potent venom in its new home. (409)

Nor does either have much respect for the other's culture or beliefs, assuming that their own is of course far superior:

Her planet must have been under Kingdom rule so long they'd forgotten they weren't free. She must have been born under it and raised by parents, grandparents who were born under it. It must feel like nature to her, thinking the way that she thought. He'd often said before that he felt sorry for the dupes who actually believed it all, but this was the first time he'd actually meant it" (797).

Campos to Jones, when Jones exclaims his disgusted that the escape launch has to be flown manually:

"What planet are you from that doesn't appreciate human skill, Jones?.... God gave some of us speed and reflexes because he meant us to use them, and didn't give them to others because they were meant to do something else. That's basic orthodoxy" (577).

Campos is a naïve but ruthless do-gooder, bent on self-sacrifice, or so Jones believes, while Campos is certain that Jones is a sneaky weasel, always looking out for number one. But after the prison transport is attacked, and the two crash-land together on the detention planet, they are forced to interact in order to survive. And their opinions of each other, and of each other's values, slowly begin to change:

Enhancements, he'd said. He had enhancements to tell when food was poisoned, and presumably enhancements to heal himself fast. How many of my people over the years would have lived if they'd had the same? It was an unsettling thought. Why would God disapprove of healing anyway? (1061)

"Mind rape" she'd called it [his culture's use of nanites to influence others' feelings], which was disturbing because he hadn't thought of it that way before, and having thought of it made all the times he'd done it sound kind of sordid. You certainly didn't defend people from one sort of rape by carrying out another. (1567)


Jones and Campos begin to discover the value in difference, and the value of working with someone who appears to be your total opposite.

Before Jones has fully embraced this new insight, however, he transfers medical nanites to Campos (after promising her not to), as a defensive move. But when Campos decides to singlehandedly try and rescue her crew, captured by rebellious prisoners, he decides to use the nanites for her protection—by changing her body into a man's.

Without, of course, asking her first.

Beecroft has penned an adventure-filled utopian science fiction romance, an opposites-attract love story that also interrogates issues of gender and bodies, all with intelligence and a healthy dollop of humor. While Lioness of Cygnus Five will never be mistaken for hard SF, it does gift its readers with an engaging balance of extrapolative thought-experiment and unexpected romance.


What have been your favorite feminist SF romances of 2016? 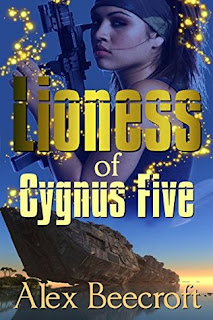