Run a Google search for "strong female protagonists," and you'll get more than 5 million hits. If you attempt to narrow the results by adding the words "in girls' reading," you might expect the number of hits to go down. But in fact, they increase, exponentially, to more than 40 million. In the early 1990s, books and reports such as Mary Pipher's Reviving Ophelia: Saving the Selves of Adolescent Girls (1994), Peggy Orenstein's SchoolGirls: Young Women, Self-Esteem and the Confidence Gap (1994)  and the AAUW's How Schools Shortchange Girls (1993) argued that images of passive girls and women in popular culture were contributing to an American society of girls at risk. The AAUW (in Girls in the Middle: Working to Succeed in School [1996]) recommended that schools work to "expand the range of acceptable behaviors for girls, particularly 'nonconforming' behaviors such as argumentative and assertive actions," to combat the trend. Concerned librarians, teachers, and parents began compiling lists of books that might counter such negative images, thousands of which have proliferated on the web. And thus, the era of the "feisty" girl protagonist was born.

The feisty girl protagonist can often recognized by the way she talks. Not only does she like to argue; she speaks up for herself, and for other girls, even if her society would prefer she keep silent. She also likes to be in control, a decision-maker, actively determining her own fate. Often openly objecting to the social constructions of gender that would limit her agency and choice, the feisty girl refuses to conform, often earning opprobrium rather than praise from those around her, but forging ahead in spite of it. Above all, the feisty girl is not an object or a reward; she is not the gift given to the handsome prince who rescues her, nor does she live happily ever after, known only as his wife.

The feisty girl can be found not only in books for teens, but also in books for adults. As the kick-ass heroine of adult fantasies, the rebel of historicals, and the career woman of contemporary fiction, the feisty heroine has become a staple of the romance genre.

Yet when you look more closely at the feisty heroine of adult romance*, all too often you're likely to find that her feisty-ness is simply a reassuring cover papering over the same old disempowered heroine package. If you dare to look past her cheeky, argumentative banter, if you peek under her shiny pink superhero cape, you'll discover a girl without choice, without agency, a girl who gives it all up to gain the love of a good man.

The feisty but hardly feminist heroine is quite common in historical romances (ironically, as the word did not come into common usage until the very end of the 19th century, according to the OED). People around the heroine frequently talk about her non-conforming behavior, yet such behavior is rarely shown in the novel; she's a rebel in reputation, but not in practice. She's great at squabbling, especially with the hero of the piece; the two go at it early and often, arguing over every trifle imaginable, but rarely about anything of substance. If the heroine does protest the hero's gender-limiting assumptions, she does so only to implicitly accept them in the end by marrying him, for he certainly hasn't changed his mind. Readers get the surface features of feminism, but without any of its substance. 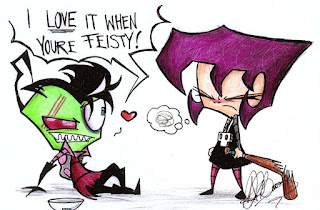 Feisty girl can also be met with in fantasy romance, particularly in the recent trend in books about shape-changers. Forced to transform into a vampire, werewolf, or other supernatural creature, typically against her will, feisty girl may protest her fate, but in the end has little say in the matter. Because she is "destined," not just to be transformed, but to be loved by the hero, she is given no choice, no agency over her own body, or over whom she'll share it with. Other men in the book often complain about feisty girl's mouthiness, allowing the hero to look good by comparison, because he enjoys it when she mouths off. But he rarely allows her to win a verbal or physical argument against him. One by one, her protests are cut down, or ignored. For example, at book's start, she may argue that wearing a thong is uncomfortable, stupid, done only to please a man, but by the end of the book, there she'll be, wearing said thong for her beastly lover's pleasure, the only explanation for her change of heart an implicit one: that her lust for said lover has overcome any principles she once espoused. Oh, the novel may allow her to make one or two life decisions, but in the end they are only token ones; far more decisions have been made for her, often in the face of her protest. 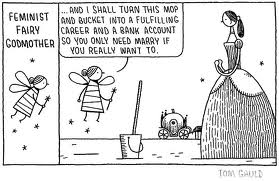 Interestingly, the words "aggressive, excitable, touchy" are the ones the OED chose to use in its definition of "feisty." No mention at all of "independent," "decisive," or above all "feminist." So be on the look-out for the mock-feminist feisty girl. Don't allow her to fool you; mouthing off is not the same as actively protesting gender restrictions, assuming equality between the sexes, or determining your own fate. Feisty is not always a synonym for feminist.

What books come to mind when you think of heroines whose feisty-ness is only skin-deep?


* And of purportedly strong girl romances for teens, as well, about which more in a future post...

Next time on RNFF:
The "proper" woman as feminist historical heroine: Mary Balogh's A Summer to Remember