This past weekend, I attended the New England Chapter of the Romance Writers of America's annual conference. Meeting fellow writers, attending workshops about craft, and collecting money and paying bills (I'm the NEC Treasurer) proved both intellectually invigorating and physically exhausting. When I landed back home on Sunday afternoon, all this introvert wanted to do was to grab a tall glass of water and curl up in bed with a familiar favorite book. My choice: a Regency romance by the founder of the genre, Georgette Heyer.

The heroines of Heyer's romances tend to fall into one of two categories. In many of her earlier books, the heroines are young and silly; as readers, we're invited to laugh at them as their combination of high spirits and woeful ignorance of the world leads them into one scrape after another. In contrast, her later books tend to feature older, more intelligent heroines; rather than laughing at them, we laugh with them as they match wits with equally intelligent heroes. Needless to say, the majority of my favorite Heyer books fall in the latter category, including yesterday's comfort read: the 1958 novel Venetia.

Though only twenty-five years old, Venetia Lanyon has all the earmarks of the older, wiser Heyer heroine. The oldest of her three siblings, she's long served as lady of the manor in the absence of her mother, who died when she was ten. And since the death of her father three years earlier, she's been in charge of managing the Lanyon estate for brother/soldier Conway, who has been taking his own sweet time returning from the continent after the final defeat of Napoleon. Though naturally of an equanimous temperament, Venetia has a playful wit and habit of saying what she thinks, refusing to indulge in the white lies other women of her class deploy to hide the gaps between social ideals and prosaic realities. For example, she scandalizes her more conventional neighbor Lady Denny by asserting of her departed but not sorely missed papa: "In fact... we go on very much better without him." Financially independent, Venetia plans to set up her own establishment if and when Conway should return with a wife, unwilling to cede her authority within the home to another, only to fade slowly into the background as maiden aunt to a passel of Conway's children. But in the meantime, she takes pleasure in  making decisions about the estate, looking after self-absorbed but intelligent Aubrey, and politely but determinedly fending off two equally unsuitable neighborhood beaux, nineteen-year-old Byronic wannabe Oswald Denny, and authoritarian "worthy" Edward Yardley.

The relationship that develops between Venetia and newly arrived neighborhood pariah Lord Damerel, a reputed rake of the first order, is striking not for the sexual sparks that fly, but the "enjoyment of the absurd" both share. "I have always wished for a friend to laugh with," Venetia tells Damerel the second time they meet. "To share a sense of the ridiculous prohibits dislike—yes, that's true. And rare! My God, how rare!" Damerel acknowledges (65). Venetia may be beautiful, but it is her wit, and the sense that they share a "tug of sympathy between them," that keeps Damerel lingering in the neighborhood far longer than he'd planned. And it is the friendship that develops between them, a friendship not blind to his faults, that allows Venetia to develop a mature love for Damerel. "You have fallen in love for the first time in your life, Venetia, and in your eyes Damerel is some sort of hero out of a fairy-tale!" Uncle Hendred accuses (367). Venetia simply laughs, as does the reader, for far earlier in their relationship, Venetia has shown she has Damerel's number: "I allow you all the vices you choose to claim—indeed, I know you for a gamester, and a shocking rake, and a man of sadly unsteady character—but I'm not so green that I don't recognise in you one virtue at least, and one quality." When Damerel exclaims "What is that all? How disappointing? What are they?" Venetia demonstrates her ability to see beyond black and white, beyond the flat fairy-tale villain: "A well-informed mind, and a great deal of kindness"(104).

Damerel, like many a rake whose abandoned ways serve mainly as a cover for a wounded heart, sacrifices himself at the urging of Venetia's friends and uncle, pretending that the love he feels for her is only a passing fancy. Distraught, Venetia agrees to accompany her uncle to London, to put much-needed distance between herself and Damerel. But when she discovers Damerel's lie from her loquacious, indiscreet aunt, she actively works to ensure that it is she, not her brothers nor her uncle nor even her potential lover who decides what is best for her. It is not passive self-sacrifice, but cunning, wit, and above all, humor, that win the day.

Reading Venetia this time through, I was struck by a thread that many might point to as distinctly anti-feminist, and certainly against the conventions of the romance novel. Early in their relationship, Venetia worries not that Damerel has had many loves before her, but that "perhaps he had many friends, too, with minds more closely attuned to his than she believed her own to be" (69). Friends are more of a threat than loves, she believes, because "Men—witness all the histories!—were subject to sudden lusts and violences, affairs that seemed strangely divorced from heart or head, and often more strangely still from what were surely their true characters. For them chastity was not a prime virtue" (69). Venetia then remembers that even kindly Sir John Denny had not always been faithful to his lady, and then recalls Lady Denny's words on the occasion:

"Men, my love, are different from us... even the best of them! I tell you this because I hold it to be very wrong to rear girls in the belief that the face men show to the females they respect is their only one.... One ought rather to be thankful that any affairs they may have amongst what they call the muslin company don't change their true affection in the least. Indeed, I fancy affection plays no part in such adventures. So odd!—for we, you know, could scarcely indulge in them with no more effect on our lives than if we had been choosing a new hat. But so it is with men! Which is why it has been most truly said that while your husband continues to show you tenderness you hav no cause for complaint, and would be a zany to fall into despair only because of what to him was a mere peccadillo. 'Never seek to pry into what does not concern you, but rather look in the opposite direction!' was what my dear mother told me, and very good advice I have found it."  (69-70)

The narrative piles layer upon layer of conventional wisdom here—from "histories," to Lady Denny, to unnamed conventional wisdom, to Lady Denny's mother—to support the idea that men are by nature more sexual creatures than are women, and thus expecting chastity from them would not only be unwise, but unnatural. On the one hand, this abundance of expert wisdom adds authority to an assertion with which contemporary readers are likely to take issue, particularly given romance novels' insistence on the "one true love" faithful for all eternity model. But on the other, the extreme lengths to which it must be supported can be read as a shoring up of a belief that is questionable at best. And it simultaneously works to distance the belief from Venetia herself; it is not Venetia, but history, Lady Denny, Lady Denny's mother, who asserts this belief as truth. For women like Lady Denny must believe such things in order for their husband's behavior not to "blight her marriage" (69).

But does Venetia share this belief? Toward the end of the novel, an unexpected voice from Venetia's past, one who's very identity calls into question the same assertion held up as absolute truth earlier in the story, puts the question to her bluntly: "You and Damerel!... Do you imagine he would be faithful to you?" Venetia's reply is bluntly honest, a touch wistful, perhaps, but above all, imbued with trust in Damerel's feelings for her: "I don't know. I think he will always love me. You see, we are such dear friends" (330). For Venetia, it would seem, love and friendship matter more in a husband than a promise of sexual fidelity.

But she is well aware that if she does not find a way back to Yorkshire, Damerel's rakish habits are all too likely to lead him to solace his loss in arms of other women, something she obviously wishes to prevent. And Venetia isn't one to just "look in the opposite direction," as Lady Denny and her mother advise. Her uncle's euphemistic warnings during the novel's climactic scene—"Damerel may have the intention of reforming his way of  life, but habits of long standing—the trend of a man's character—are not so easily altered!"—allow Venetia, through irony and humor, to bring out into the open the issue

Lady Denny would rather ignore:

Haranguing Damerel over his immoral behavior, or extracting from him a promise to be faithful, are not the methods Venetia chooses to let Damerel know her feelings on the issue of marital fidelity. Instead, she teases him, laughs at him, shows him the absurdity of engaging in such behavior when a friend who has "retired to bed" awaits. That Damerel immediately takes up her joke and builds upon it demonstrates the effectiveness of speaking openly, and of expecting the same honesty from one's spouse. Rather than taking pleasure in the respectable face a spouse shows to genteel women, and ignoring the other roles a husband shows to the world, Venetia expects her future husband to show her all his faces, and to show him hers in return.


Which Heyer novels do you think contain the most feminist moments? 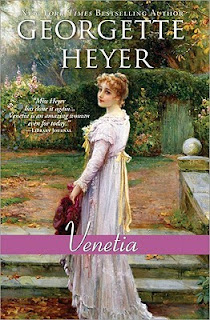 
Next time on RNFF
Wicked Women in Romance