In the literary world, Mills and Boon has long been the black sheep. Its books—to call them novels would be to raise them far above their station—are lightweight, the plots recycled and the endings predictable and to read them is a waste of precious life. — Sarah Freeman, "100 Years of Romancing the Readers." Yorkshire Post, 2008

Having spent a great deal of time reading [Harlequin/Mills & Boon] romances, I would argue that many are well-written, skilfully crafted works which can and do engage the minds as well as the emotions of their readers, and a few are small masterpieces—as I shall show. —Laura Vivanco, For Love and Money: The Literary Art of the Harlequin Mills & Boon Romance, 2011

For an academic scholar, admitting that one reads and studies romance novels is a particularly risky move. Though literature scholars pride themselves on uncovering the hidden oppressions in the texts they analyze, they rarely talk about the strict hierarchies within their own field, hierarchies often based upon the cultural capital of the texts one analyzes, more than the skill with which one analyzes them. When I met Mary Bly, a scholar of Renaissance literature, at a romance writers conference and asked how her colleagues at Fordham University felt about her other identity, award-winning historical romance writer Eloisa James, her answer was disappointing if unsurprising: she'd kept her alter ego a secret until one of her books made the New York Times bestseller list.

To proclaim that the mass-produced romances of Harlequin (or of Mills & Boon, the company's name in the UK) are not only worthy of analysis in a cultural studies context, but that they embody "literary art," then, is to open oneself up for knee-jerk ridicule from academe. Which is why I so admire Laura Vivanco's courage in writing and publishing her monograph, For Love and Money: The Literary Art of the Harlequin Mills & Boon Romance. Bucking the cultural studies trend of previous literature, sociology, and psychology scholars who have written about category romance, Vivanco instead meets literary scholars on the field of literary value. 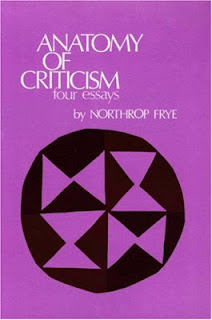 What evidence does Vivanco muster to support what to most readers might seem a dubious claim? Rather than argue for her claim directly, she justifies it by disproving specific criticisms previous writers have aimed at the genre. In her opening chapter, to counter the claim that romances are unrealistic works of wish-fulfillment fantasy, she calls upon an unlikely ally: mid-twentieth century literary scholar Northrop Frye. Frye's 1957 Anatomy of Criticism: Four Essays argued that literary scholarship should move beyond value judgments of individual texts, and instead take a more scientific approach to the field as a whole. Frye seems an odd choice to help make a case for a value-based argument, but applying his ideas to category romance does lead to some helpful insights.

Like Carolus Linneaus's taxonomic system of classifying life forms based on their shared physical characteristics, Frye sorted the fictions he studied into different groups, or what he termed "modes." Frye's modes—Mythic, Romantic, High Mimetic, Low Mimetic, and Ironic—are differentiated by whether their heroes (the term used by Frye) are superior or inferior in kind or degree to your average human being, and to their environments. Vivanco argues that HM&B books can fall into any mode but the Mythic, although most tend to be either in the High Mimetic (with heroes who are superior to other humans, but not to their environments) or Low Mimetic (with heroes who are equal to other humans). Placing the category romance within the context of these modes helped me to understand why so many of its protagonists are larger than life figures; many of the HM&B guidelines call for stories written in the High Mimetic mode. Vivanco's discussion of two romances written in the ironic mode, a mode very few romance writers choose for their novels, proves especially interesting, allowing me to see why I enjoyed Jennifer Crusie's Strange Bedpersons (1994) and Kristin Higgins' Catch of the Day (1996) even while feeling that neither was really quite a romance in the conventional sense.

The second part of the chapter rebuts other, more specific criticisms aimed at the unrealistic nature of category romance—that they all must have happy endings and that they never include social problems or issues—before taking an abrupt turn back to Frye's modes to counter the argument that HM&B books are all the same. Not only are there HM&B books written in different modes, but even books within the same mode can vary, as there are gradients within each mode. Also, as Frye argues that while one mode "constitutes the underlying tonality of a work of fiction...any or all of the other four may be present," HM&B authors may include hints of myth or romance within their primarily high or low mimetic works. Frye suggests that "much of our sense of the subtlety of great literature comes from this modal counterpoint" (50-51), a suggestion that Vivanco quotes but does not directly apply to the books she analyzes. Instead, she explores how such modal counterpoint can be used to increase reader identification (with the "average" heroine in counterpoint to the larger-than-life hero), or to convey the impact of love (its ability to make a heroine feel as if she is in a completely different, and higher, mode). Analysis such as this, when Vivanco uses Frye as a jumping-off point for her own theoretical work, are the spots in the text that I found the most valuable.

Chapter 2 identifies HM&B books which retell or re-envision myths, fairy tales, or chivalric romances. Vivanco doesn't explain how identifying the stories that undergird HM&B romances supports her claim that some are "small masterpieces," or that others are "well-written" or "skilfully crafted," however, leaving the reader to assume that her exploration of how retellings can be cast in different modes, from high to low mimetic to ironic, was undertaken to disprove detractors' claims that category romances are all the same.

I found Chapter 3, "Metafiction," the most interesting. One section focuses on the self-reflexivity of romance (a topic about which I blogged about in this post), discussing books in which stereotypes about romance authors, and/or romance readers, are rebutted by featuring romance-writing or -reading heroines. Another discusses romances that make links between their genre and other popular culture genres typically denigrated by the "high brow," such as television, film and comics, or other low-status literary genres, such as the Gothic. The brief middle section touches upon books which reference classic works of literature (Austen; Shakespeare). Though Vivanco argues that some HM&B books can, like the best metafiction, lead readers to productively question the relationship between fiction and reality, the books she discusses seem to fall more in the category of books that simply use references to other fictions in order to participate in a "shared stock of common allusions, words, and metaphors" (149) than ones that actively work to disrupt the taken-for-grantedness of fiction's conventions.

The last chapter identifies common metaphors in HM&B romances, suggesting both that the use of extended metaphor demonstrates the talent of HM&B writers, and that particular metaphors can help the literary critic better understand individual texts. Vivanco describes books in which extended metaphors are used to symbolize love: buildings and interiors; bridges; gardens and flowers; hunting; and journeying.

Vivanco's chapters demonstrate both her skill in close reading individual texts and her wide knowledge of the HM&B field. They also provide clear evidence that many of the criticisms leveled against category romances are clearly overgeneralizations. It would have been interesting to hear more about why Vivanco chose these particular 147 books to discuss, though. Are these outliers that prove the rule that in general, HM&B books lack literary merit? Or do they provide a broad enough sample to suggest that most HM&B romances contain literary merit? What percentage of HM&B romances demonstrate "literary art," in Vivanco's view? If the percentage is small, are the books she discusses ultimately relevant, or simply mere curiosities, easily overlooked amidst a welter of far less accomplished writing?

Do these chapters ultimately support Vivanco's overall claim that some, if not all, HM&B romances, demonstrate "literary art"? In her conclusion, Vivanco suggests that genre constraints such as those placed on HM&B writers do not always have to be negative; like the formal constraints of a sonnet, or Jane Austen's "little bit (two inches wide) of ivory on which I work," such constraints can provide fertile ground for literary artistry. But as Vivanco never gives her readers a definition of just what constitutes "literary art," readers are ultimately left unable to judge whether or not any of the 147 books she discusses embody it, or which among those 147 are "small masterpieces." Literary merit has become a vastly contested concept in the sixty+ years since Northrop Frye wrote Anatomy of Criticism; my idea of what constitutes it may be quite different from yours, or from Vivanco's.

Whether or not HM&B books contain literary artistry or not, they are certainly worthy of study by both cultural studies and literature scholars, particularly those of a feminist bent. The metaphors they deploy, the literary and cultural references they evoke, have much to tell us not only about gender assumptions, but also about female readerly desire. I applaud critics such Vivanco, Eric Selinger, Sarah Frantz, Pamela Regis and others, scholars brave enough to study popular romance in spite of the often denigrating attitude of many of their colleagues. 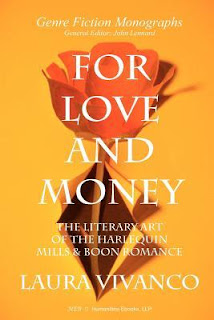 Next time on RNFF:
The allure of the male harem