Depicting Bisexuality in the Past: Grace Burrowes' TREMAINE'S TRUE LOVE

Though I'm a fan of all romance genres, historical romance is the one my alter ego, Bliss Bennet, writes and the one my reader-self gravitates towards the strongest. So I'm always curious to read the nominees for the historical romance category of the RWA's RITA awards. Grace Burrowes has received several RITA nominations over the years, unsurprisingly given her books' many strengths: beautiful writing, slow-building romances, the affection and comfort of large families, the respect and care her characters demonstrate toward one another even in the face of disagreement and difficulty.

Tremaine's True Love contains all of the above. But what really interested me in reading it was not the book's main romance, between Bernita (Nita) Haddonfield, the eldest daughter of the Earl of Bellefonte, andTremaine St. Michael, a half-French half-Scots comte/merchant/art collector who travels to Bellefont's home to bargain for some rare merino sheep Bellefonte owns. It was one of the book's subplots, the one featuring Nita's youngest brother, George, and how Burrowes depicted that character's "unconventional" sexuality. 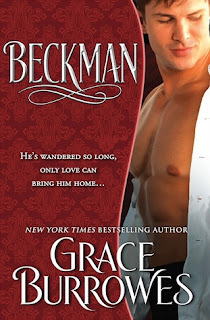 I seem to recall hints in earlier Burrowes books, books about the elder Haddonfield brothers (in Nicholas: Lord of Secrets? or Beckman: Lord of Sins?), that George might be attracted to men. This book confirms those hints, and follows out their implications. We receive direct confirmation of his preferences from George himself, in a scene told from his point of view. He has just given the young son of his neighbor, widow Elsie Nash, a ride home on his horse to save him a cold walk. After Elsie attempts to engage him in polite conversation about his recent travels, George responds:

"I travel on the Continent because my family finds my taste in kissing partners inconvenient." Dangerous, Nicholas [his eldest brother, the current earl] had said, for certain sexual behaviors, regardless of how casually undertaken or commonplace, were yet considered hanging offenses. (72)

Said neighbor, though, is not put off by what she accidentally saw:

"George Haddonfield, if I were dismayed by every person I found kissing an inconvenient party in the garden, I should never have lasted a single Season as the colonel's wife. You were kind to my son, and that is all that matters to me." (72)

Nicholas, the current earl and George's older brother, knows about his dalliances with men (as the caution that George remembers above demonstrates), but doesn't outright condemn or shun George because of them. Others in George's family know about his attractions, too, and do not cast George aside: "George was the brother closest to Nita in age, and his unconventional attractions had never been a secret to her, nor had they been anything but natural to him" (240). In fact, the only person who knows about George's liking for men and expresses disgust for it is the villain of the book.

Well, perhaps that is not quite true. For George himself is not all that happy with his own "unconventional attractions." When he finds himself drawn to his sister Nita's suitor, Tremaine, he thinks thus: "[Tremaine St. Michael] was attractive, wealthy, and interested in Nita. So George must pant after him in silent frustration? Must comport himself with all the emotional delicacy of a tomcat? Such stirrings flattered nobody. They were for strutting, impulsive boys who had one foot planted in rebellion and the other in boredom" (177). George thus equates his same-sex sexual attractions to immaturity, to animality, to the uncontrolled.

Earlier in that same scene, George reveals that he's had sex with women, as well as men: "Though George had recently discovered he liked looking at Elsie Nash too—a puzzle, albeit a pretty one. He'd enjoyed the company of women in the past, the same as any other fellow at university—some women, anyway. And a few men." (173). His attraction to women, though, is not as strong—nor as dangerous—as it is towards men: "George liked women, and even desired them on occasion, the way a fellow might desire a hot cup of tea or chocolate with a dash of cinnamon on a cold morning. Not the way he longed for the fiery pleasure of a good brandy—stupidly, passionately, without any dignity or care for his own well-being" (175). If one were to categorize George in current-day terminology, one might say he's bisexual but with a strong leaning toward the masculine end of the gender spectrum.

Once George thought he would try to marry a woman who "wouldn't have minded a marriage where both partners were free to roam, provided appearances were maintained," hinting that his roaming would be in the direction of male, rather than female, partners. But, for some unspecified reason, "The notion struck George as vaguely distasteful now, sad even" (174). George realizes he is lonely, and finds himself envious of Tremaine and his sister. He, like almost all of Grace Burrowes' characters, longs for affection, comfort, and connection. For heterosexual characters, such desires are met, of course, through monogamous marriage.

And thus when George offers comfort to his neighbor Elsie Nash, and she kisses him in return, readers should not be surprised to read,"George's mind manufactured a single thought—kissing Elsie felt good too!—before he began kissing her back" and that her "mouth had the power to wake a man up, to reveal to him choices he could make, paths he could choose" (320, 346-47). The path George chooses is to propose to Elsie, telling her that "My regard for a passing handsome or even pretty face is eclipsed by the loyalty [your positive] characteristics inspire" (347-48). In the internal monologue that follows his declaration, though, George tries to convince himself that his assertion will, in fact, prove true:

He hoped. George's hope was based on several solid realities. First, his involvement with men had never gone beyond the casual or the physical. Men were a lot of bother, in George's experience, full of strut and blather, every bit as capable of drama as the blushing debutantes filling any ballroom.
Second, his regard for Elsie included a fat dose of physical attraction, but finer emotions as well. He respected her, he enjoyed her company, he liked her. He liked her a lot, always had.
Third, there was the boy. Digby needed a father, somebody to stand between him and [his uncle]. George could hardly be that father if he spent his evenings larking about London, bored, randy, and causing his family worry. (348).

George and Elsie go on to marry, and, in the book's final chapter, we hear that not only Nita & Tremaine, but also George and Elsie, are expectant parents.

I can't help but feel pulled in two directions by this end to George's story. On the one hand, I'm thinking that it's likely pretty historically accurate for a gentleman of this period to find his own attraction to the same sex upsetting and disturbing, as George does. And that if he had any attraction to women at all, that such a man might prefer to marry a woman to avoid both his own fears and to give his birth family peace of mind than to engage in sexual acts with other men.

But on the other, I can't help but cringe when I read Tremaine St. Michael's response to George's declaration that he is to marry Elsie and that he would "like to survive until my wedding night" (the two are about to participate in a duel): "Never did like public school, myself," says his soon-to-be brother-in-law (368). Public school here presumably being the site where George first developed and explored his sexual attraction to men. In that one short sentence, Tremaine simultaneously indicates that he is aware of George's sexual attraction to men and asserts that such attraction is nothing more than a bad habit George picked up because he was sent away to school, away from his (heteronormative) family. That George takes no umbrage at Tremaine's assertion suggests that he, too, believes that his same-sex attraction belongs to his youth, which, by marrying, he is putting aside to become a mature male adult.

Not a message I'm happy to embrace.


Would love to hear the take of other readers of Tremaine's True Love on George's character arc... 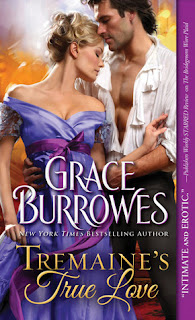