I've been in the midst of packing up to head out for a summer vacation with family, and have been mulling over which books to bring along. Paring down the pile of potentials is always difficult, especially when you know you have to carry your own luggage...

But the task is finally accomplished. Here's the final selection (at least of the ones in paper; lots more on the e-reader): 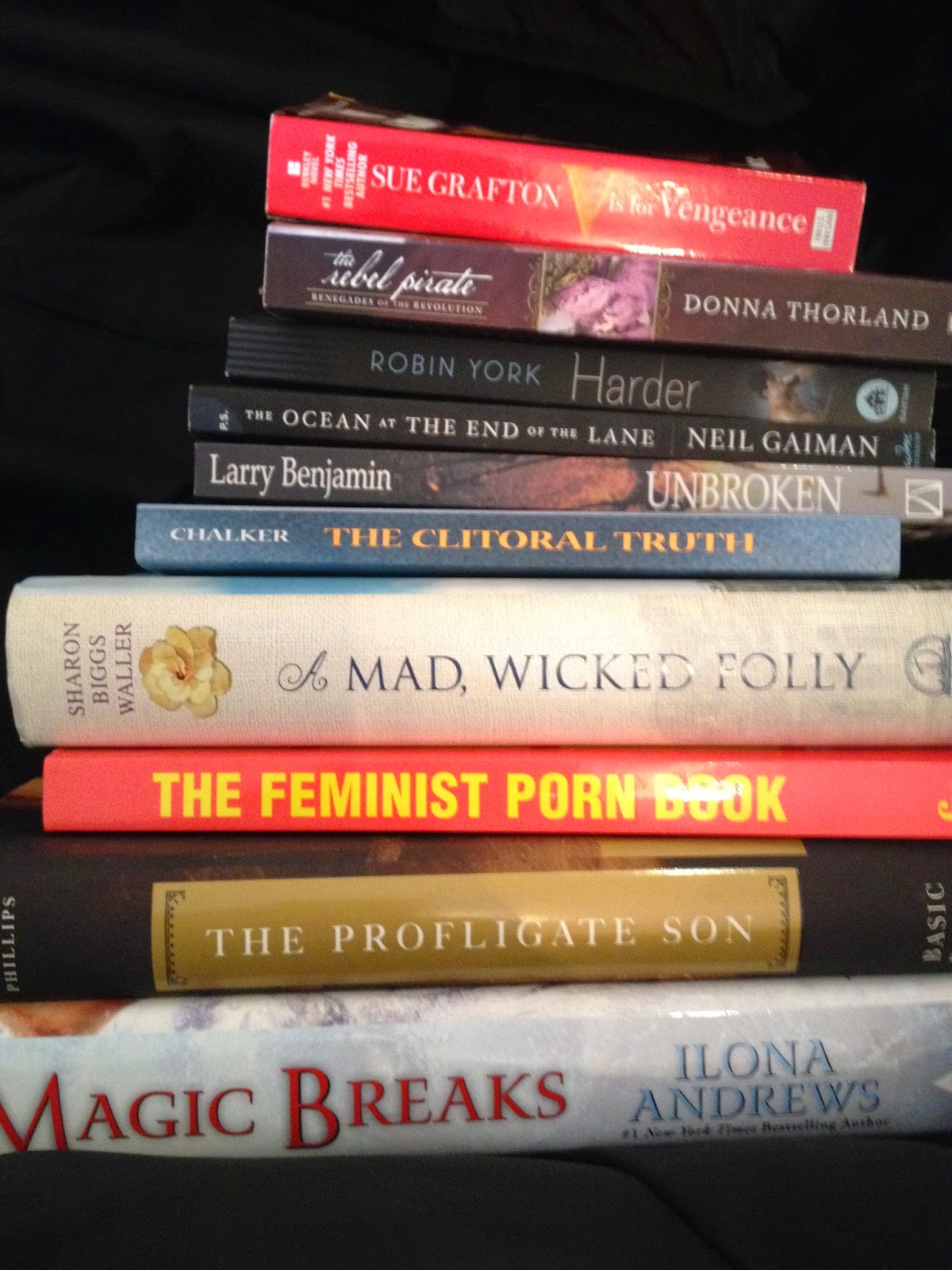 A few romances in the stack, of course! And even more on the e-reader...

August has once again been declared "Read a Romance Month"—what romances are you most looking forward to indulging in as you vacation or simply enjoy the last days of summer?

RNFF will be back with more book reviews, critical opinions, and intellectual musings in September. Enjoy the rest of your summer!

If I asked you to name some examples of sexism, which would most quickly come to mind? Sexual assault? Sexual harassment? Job discrimination? Laws limiting women's rights and/or freedoms? What about the more mundane, everyday, and invidious kind of sexism that comes not from without, but from within? Internalized sexism—hearing, accepting, and believing sexist stereotypes about what it means to be a girl or a woman, and then enforcing these beliefs on other women, or enacting them themselves—may be less newsworthy than more overt, political sexist acts, but it may have an impact at least as far-reaching. And it certainly can get in the way of a woman's attempts to forge a romantic relationship with a potential partner. 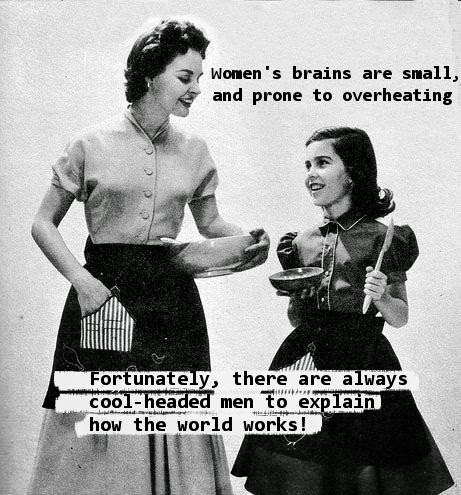 I've certainly read romances that call attention to, and protest against, more overt forms of sexism. But I couldn't name a romance that confronts internalized sexism, particularly internalized sexism that a romance heroine must recognize and fight in herself. Until, that is, I got hold of an ARC of Ruthie Knox's latest contemporary romance, Truly.

Knox's latest heroine, May Fredericks, is your quintessential Midwestern good girl. May "hated drama and anger, disapproval, any kind of tension" (Kindle Loc 1664), and constantly finds herself apologizing, even for things that are clearly not her fault. She often does her best to be invisible, but disappearing can be a bit difficult "when you were five foot, eleven-and-three-quarters inches and had some meat on your bones" (Loc 75). We're introduced to her shortly after her penchant for keeping her true feelings bottled up has come embarrassingly, publicly uncorked—the rejection of a most suitable suitor, a rejection involving lots of cameras, lots of witnesses, and the less-than-conventional use of an uncommon table utensil. And after a series of mishaps had left her alone, without money or ID, loitering in a New York bar devoted to Green Bay Packers fans, hoping to find a friendly Midwesterner to offer her a helping hand.

Instead, May finds herself "rescued" by belligerent Ben Hausman. Ben, like May, is in the midst of major life upheavals—recently divorced, the restaurant in which he'd been chef and co-owner taken away in the settlement, unable to take on another cooking job due to a non-compete clause, and squatting in the apartment of a friend who is due to return home in a week. Surly and angry, he's about as far from an affable Midwesterner as anyone could find:

He'd wanted to be the best chef in New York. And that was great, except he'd also been a miserable bastard with stress-induced hypertension, insomnia, and a tendency to fly into unprovoked rages. He'd screamed at his kitchen staff and fought with his wife so much, they'd practically made an Olympic sport of it. (Loc 255)

His friend Connor teases him—"I bet you couldn't be nice if you tried"—and surly Ben suddenly sees the woman whom he'd rudely blown off at the bar not as a potential date, but instead as an "opportunity": "Because how was he supposed to learn how not to be a dick, except by talking to someone who actually seemed to notice when he was one?" (Loc 321)

May finds snarly, snarky Ben fascinating, particularly the way he doesn't seem to worry about what others think of him. "How liberating it must be to be able to say whatever you wanted that way. To be rude without guilt—without even obvious awareness. How did someone get to be that way? If she asked him, would he teach her?" (Loc 958). Ben may prove a potent example, but part of May's journey is to realize that the only one who can teach her not to care, not to embody the stereotype of the good girl that everyone around her wants her to occupy, is herself.

Part of May's journey involves a make-over scene, a standard trope of romance fiction. Yet in Knox's hands, the make-over is less about a transformation from ash girl to princess than about allowing May's true self to be seen—not by others, but by May herself:

It wasn't Dan's May, plain and steady. This was a tall stranger whose honey-blond hair had dried wavy and windblown. An unknown woman in snakeskin pants who looked like she might eat you up and spit out your bones if you crossed her. This was the woman who'd exacted vengeance against Dan for wrecking what was supposed to be one of the most beautiful moments of her life. A powerful, impolite, passionate woman. And the weird thing was, May recognized her. She was the person May had always known she was, deep down. The person no one had ever encouraged her to be. But in New York, she could be whoever she liked. (Loc 1447)

Rejecting social messages that large women are not sexy, that nice girls never get angry, that other people's worries are not always your responsibility to fix, is not a one-time event for May; rooting out internalized sexism is not easy, and takes a lot of practice. May does a lot of backtracking, two steps forward, one step back. But recognizing that "there was no black line drawn through her life, no way of making herself over into a new person at a moment's notice. There were only the choices she made, each of them separate and individual" is a vital, life-changing shift (Loc 2655). As is understanding that each choice is a political one, either a passive acceptance of internalized sexism or a shout of protest against it. A woman who damns her Spanks, who learns to express her needs during sex, and who refuses to let a man who gives up on her steal away her hope seems well on her way to yanking out the invidious tendrils that internalized sexism implants in every woman living in a culture grounded in patriarchal ideals.


Are there other romances that confront internalized sexism that I'm not remembering? Not books just about self-esteem issues, but ones with a protagonist learning to recognize and reject the stereotypically negative messages about femininity culture conveys? 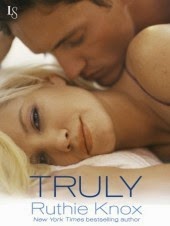 A Few Statistics to Mull Over

A birthday trip to the local spa (my first time), as well as some frustrating familial health care issues, had me wondering this week—how does spending on women's health care research compare to spending on beauty and personal care items? After a bit of internet digging, I found the following statistics: 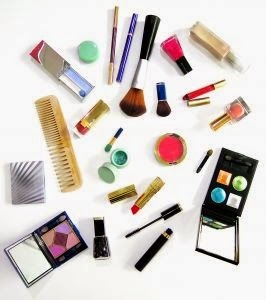 And, just to tie this all in to the blog, 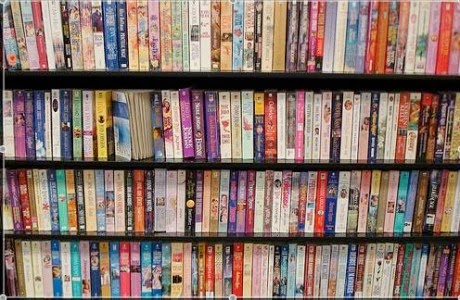 
If you were in charge of the world, how would you proportion its budget for these three areas?