Talking their Way through Revolution to Love: HAMILTON'S BATTALION

If you happened to be pop in on the Twitter feeds of Courtney Milan, Alyssa Cole, or Rose Lerner during the past two years, you might be forgiven for occasionally mistaking them for historians of the American Revolution rather than authors of historical romance. Because in the wake of popularity of Lin-Manuel Miranda's Broadway smash Hamilton: An American Musical, each author, like so many Americans, became fascinated not just with the play, but also with period of history it depicts. The three biographies, histories, and primary source documents about it and Tweeted often about their research, along with quotes from the musical's hip-hop lyrics.

One line that resonates for many Hamilton fans—"Immigrants: we get the job done"—might have been the inspiration for the just-published novella collection to which all three romance authors have contributed, Hamilton's Battalion: A Trio of Romances. For each of the stories features characters from ethnic and racial backgrounds who rarely feature in the white male Protestant line-up of our most familiar Revolutionary War actors.

I like to believe, though, that Cole, Lerner, and Milan might have equally been inspired by a slightly different line: Aaron Burr's advice to brash, outspoken Alexander Hamilton, who has recently arrived in America, to "Talk less, smile more." For those who have seen the play (not me, alas!), or are familiar with its lyrics, know that Miranda's Hamilton could never have followed Burr's well-intentioned advice, even if he had wished to. Speaking, and speaking out—loudly, abrasively, and often—is the way that Miranda's Hamilton "gets the job done."

As do one of the partners of each romantic trio in Hamilton's Battalion.

The collection's premise is that Alexander Hamilton's wife, Eliza, is collecting stories from all who knew him in preparation for writing his biography. The book's first two stories purport to be letters written by soldiers who served in Hamilton's military battalion at Yorktown, while the third features the woman currently employed by Eliza Hamilton to take notes during her interviews. That Eliza Hamilton would be so charmed by the love story of a Jewish soldier, or that of an interracial romance, seems far more fantasy than possibility. Yet that such soldiers did serve in the Revolutionary army—Jewish ones, queer ones, even female ones—is the stuff of history, not make-believe, as each writer's author's note clearly explains.

Cole's novella, "That Could Be Enough," features the most familiar type of romance talker: a smooth-talking charmer who woos a heroine who has been hurt by love in the past. But the identity of both her heroine and her heroine's rakish fascinator is what makes this story refreshingly different. Mercy Alston, a free black currently employed in Eliza Hamilton's 1820's Harlem household, has little sympathy for the "awful hunger" that she believes the older woman is trying to appease by collecting stories of her dead husband. "That was the thing no one told you: great love took more than it gave, and the greatest love could obliterate everything you'd been" (Kindle Loc 4079).  Mercy, who grew up an orphan, is that staple of romance fiction: a woman who has been burned by love before, and who has repressed her best self to avoid feeling the pain of future disappointment.

But as soon as buttoned-up Mercy sets eyes on beautiful, curious, overfamiliar Andromeda Stiel, the tug of attraction pulls at her again. Andromeda, the granddaughter of a soldier in Hamilton's battalion, has come to Hamilton Grange to tell her relative's story to Eliza Hamilton. And tell it she does, with all the drama and skill of a stage performer rather than the dressmaker she actually is. For Mercy, watching a free black woman acting with so little constraint, even with a white woman, is "excruciating"—not because she fears for Andromeda, but because the woman makes her itch with irksome restlessness.

Romance readers well know how Mercy and Andromeda's story will end. Yet in her author's note, Cole suggests a more potent reason for her characterization of Mercy than simply following a romance trope: the link she implies between Mercy and herself. This story was the first piece Cole wrote after the election of 2016, a time when she, like Mercy, felt not only demoralized, but numb. America may not always prove worthy of the hope its marginalized citizens place it it, but it is that hope, Cole argues, as well as the strength of their communities, that people need if they are going not just to survive, but to thrive.

Hope—at least, hope for the survival of her marriage—is something that Rachel Mendelsohn, the protagonist of Rose Lerner's "Promised Land" has long given up on. The story opens as American soldiers are encamped outside Yorktown, and Rachel, now known as Corporal Ezra Jacobs, is one of the many who, fired by the idea of independence, has joined the American army. Rachel had married at nineteenth out of need—an ill mother, and no money to pay for a doctor—but had meant to be a dutiful Jewish wife. Yet her mother had died anyways, and her new mother-in-law did little to support her. And her husband, twenty-three year-old Nathan, never stood up to his own mother on his new wife's behalf. Even after they find their way to sexual compatibility, Rachel cannot help but resent the advice Nathan has always lived by himself—just ignore his difficult mother—nor forgive him for his inability to comfort her in her grief. After Nathan sends her away with his mother to escape the British invasion of their home city of New York, Rachel decides to figuratively give her husband the divorce his mother has been urging on him for years: she fakes her death and flees to the rebel army.

Rachel can hardly believe it when she recognizes the husband she left behind five years earlier, strolling casually about the American camp. Whenever they had argued about the revolution, Nathan would always take the British side. He must be a British spy! For his part, Nathan can't decide which is more shocking—that the wife he's long mourned, the woman he sat shiva for, said Kaddish for, is still alive, or that Colonel Hamilton would order him imprisoned, since he's had a bit of a change of political heart since his wife's purported death.

Unlike the outcome of the battle of Yorktown, the outcome of the emotional battle between Nathan and Rachel seems far less sure. For their disagreements stem not just from simple misunderstandings, or even from deeper political divides, but from differences of personality that make it difficult for them to understand one another. Chatterbox Nathan yammers on and on, wanting people to like him, so deafened by the loudness of his own thoughts and feelings that he is little able to hear anyone else's. Stubborn Rachel cherishes her resentment of Nathan as if it were the child she has not been able to bear, denying that feelings for her husband might be more nuanced than her idealistic temperament will allow. But both Rachel and Nathan have learned a few things in the years they've been apart, and gradually begin to recognize not just that the other is different, but their differences might even be strengths.

Unlike Rachel, her fellow Corporal John Hunter was never fired by the zeal of patriotism. But he's serving nonetheless in the revolutionary army until the damned war ends, equally distrustful of the British as he is of the Americans. White men on both sides, few who would even bother to assuage their consciences by making an empty promise to a black man like him, never mind actually keep it.

Yet make a promise to John is just what a white British officer does. Because the officer doesn't want to go back to England, which he knows he will have to if he is taken prisoner by the now victorious Americans. John has no love for the "colonial brand of imperialist scum," and besides, the man, who kept prattling at him all the time they were fighting one another, is clearly mad (2174). Taking pity on the fellow, an exasperated John offers to exchange his coat for the officer's. The man's promise that he won't forget, that he'll pay John back someday—well, John has as little faith in that as he does in the "all men are created equal" promise proclaimed by that lie otherwise known as the Declaration of Independence. A black man who prefers the company of men to woman is hardly considered an equal, even amongst most of his fellow soldiers.

Yet only a few days later, just when John is about to leave to return home to Rhode Island and his beloved sister, who should show up at John's tent but that crazy British officer, as determined to find John as he is puzzled about just how he is going to repay him. When John half-jokingly suggests that the prattle-basket fellow accompany him on his walk from Virginia to Maine and help , he hardly expects the man to take him seriously. Yet Henry Latham—not the man's entire name, John is certain— only asks "When do we leave?"

Thus begins one of the most unlikely, hilarious, and utterly sweet road trips in historical romance novel history. Henry Latham—"something of a puppy—earnest, exuberant, and utterly devoice of house-training" (2437)—talks constantly, without pause, whenever he's not asleep. After several days of Henry's talk, laconic John decides not to respond, not even to Henry's direct questions. But not even that drastic step can put and end to the fellow's chatter.

And soon John realizes that he doesn't actually hate likable Henry's talking. In fact, he might even sort of enjoy it. Especially after he hears what an effect reading the Declaration of Independence has had on Henry. And challenges Henry to imagine whether he'd ever imagined a man like John when he read those words, "All men are created equal."


Cole, Lerner, and Milan romance the American Revolution in directions likely unfamiliar to the majority of American romance readers. That they do so with wit, style, solid research, and even a touch of humor proves the icing on the deliciously diverse slice of historical cake that is Hamilton's Battalion. 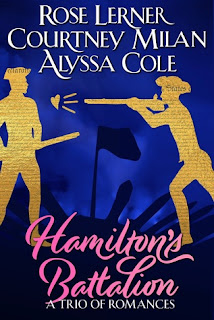 This Saturday, at the Boston Book Festival, author Aya de León and I are going to be on a panel together, speaking about "The Hows and Whys of Feminist Romance." Knowing that people in the audience might ask for book recommendations, I began browsing through the reviews I've written here on RNFF, only to realize that I totally missed the fifth anniversary of the blog! In celebration of that anniversary, I've put together a list of the more than 225 books that have been reviewed on RNFF over the past five years, either in stand-alone or group reviews, or in the RNFF "Best of 2012-2016" lists. You can either download this complete list as a handy pdf file here; or you can browse the list below, which includes links back to the reviews of each book if you want more information before you decide whether or not a book might be for you.