Addendum 1/8/19:
This blog post offended many of Snyder's readers and fans, who saw it as an attack on the author.


It was not my intention to suggest that Snyder had written Tikka Chance on Me, or any line in that book, out of "petty vengeance" towards me, as Snyder felt called to explain on Twitter. I apologize to both the author and to her fans and readers.

When so many of people have such a negative reaction to something I've written, I owe it to them, and to myself, to go back and reexamine it. And now, having done that, to point out the places where I fucked up, and apologize for them. And to ask myself questions, where I'm not sure if, or how, I offended. Fucking up, still, but fucking up with some humility. I've done so in the comments below.

This was not an auspicious return to blogging. I will try to do better in the coming year.

I always appreciate criticism and comments that help me learn and grow, especially on the difficult issues of race. But no one should feel that they have to take the time and energy to educate me unless they choose to. I pledge to work harder to educate myself.


I hadn't been this passionate about something in years. Once upon a time, I'd wanted to be an anthropologist. To travel the world and study indigenous cultures—especially some of the Adivasi communities in India. I'd committed to that, even with all the partying. But then I came home. I gave up. I stopped dreaming. It was seriously gross and antifeminist to credit a man with me coming alive again, but I couldn't deny the truth. Trucker Carrigan had changed me. —Suleikha Snyder, Tikka Chance on Me


The fall and early winter of 2018 have not been a good time for me and the RNFF blog. I've still been reading romances, and have written many a review or general post in my head that has never made it down to the keyboard. But the pairing of family health issues with a mild but still unpleasant case of seasonal depression brought on by the dark, rain-filled end of the year, perimenopausal PMDD, and the sorry political state of my country made sitting down at the computer and putting words to screen feel more a crushing burden than a soul-lightening joy. Hence the blog silence for the past two months. 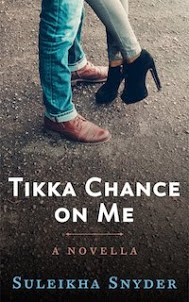 I don't know if I've managed to shake off the doldrums completely yet, but after I read the above passage in Suleikah Snyder's latest novella, Tikka Chance on Me, I felt the urge for the first time in a while to try to grapple with the often contested intersections of genre and gender. Is it "seriously gross and antifeminist" for Snyder's character, American desi Pinky Grover, to credit Trucker Carrigan, unlikely guy she's been lusting after, for her "coming alive again"?

After high school, Pinky left her small Indiana hometown for Chicago, easily balancing both of the city's intellectual and amorous opportunities by working toward a BA, and then a PhD, at the University of Chicago while simultaneously exploring her sexuality with many a glorious and wild partner. But two years ago, she'd dropped both to return to Eastville after her mother was diagnosed with Stage One breast cancer. Though her mom is well on the road to recovery, Pinky at the start of this story finds herself listless, unmotivated, not at all eager to return to her more expansive life in the big city. Until, that is, she begins a torrid affair with Trucker Carrigan, "six feet three inches of pure unadulterated trouble. I knew it, he knew it, everybody in town knew it. He'd been born bad and grown up worse" (Kindle Loc 34).

Though he, like Pinky, left town after high school, Trucker, too, has washed back up again in Eastville.  Now a leading member of the Eastville Eagles Motorcycle "Club," Trucker is deeply involved in the gang's less than legal activities. Though Trucker is working-class Irish to Pinky's middle-class Punjabi, he has a curious taste for Indian food, and brings his club members to Pinky's family's restaurant, the Taj Mahal, the only Indian restaurant within fifty miles, often enough that the Eagles have their own table there. For months, Pinky's been eyeing Trucker, and Trucker's been eyeing her right back, but neither has done anything about it.

Until a chance encounter at a local Wal-mart leads to some unexpected insights into each other's characters. Followed by a hotter-than-hot bout of sex in the cab of Trucker's pickup. Followed by another bout of physically and emotionally intense sex in a motel room.

Followed by Pinky's insightful realization that Trucker may not be quite who he appears to be...

It is at this point in the story, after the hot banging and the realization that any relationship between them has a clear end date, that Pinky has the insight quoted at the start of this post. Though Pinky goes on to tell the reader "I didn't think it was arrogant to say that I'd changed him, too," does she truly believe that it is "gross and unfeminist" to "credit a man with making [her] come alive again"? Or is she speaking to an implied feminist critic, negatively judging her for giving such credit to a member of the opposite sex?

The famous second-wage feminist adage asserts that "A woman without a man is like a fish without a bicycle." But does the inverse also apply? Is a woman with a man, a woman who allows a man to influence her, make her come alive, just a fish with a bicycle, an oddity, a freak? Is she "gross"? "Unfeminist"? 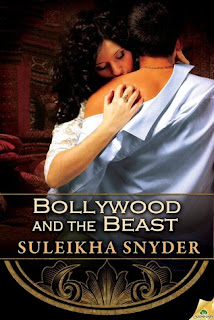 Suleikha Snyder and RNFF have a difficult history. In the early days of the blog, I wrote and published a review of her 2014 Bollywood romance, Bollywood and the Beast. While I intended that review to be positive, I was also worried about proving my bona fides as a literary critic, feeling I had to validate the existence of the blog and my authority to write about romance. That need to show off my knowledge led me to use postcolonial literary theory in a problematic, and racist, manner. Said comment had a negative impact on Snyder. I later discovered that Snyder had written a blog post about the racism she and other romance writers of color experience, and linked to my blog as an example of one of many moments of racist silencing and criticism of romance writers of color.

Given this history, I can't help but think that one iteration of the feminist critic to whom the imaginary Pinky in Snyder's latest story might be speaking is me.

But I'm not inclined to adopt the role of this implied feminist critic, a critic who would call a woman  "gross" and "unfeminist" when she recognizes and acknowledges that she is being pulled out of an emotional funk by her emerging feelings for a man. In fact, the comment makes me want to jump up and down in frustration, and point to the gap between Millennials who say they believe in gender equality (55-66%, depending on the race of the respondent) and the far lower percentage who actually identify as feminist (13-20%). As Cathy Cohen, the University of Chicago political science professor who conducted the genFORW>RD study from which these figures were drawn, notes, "the media has narrated a pretty rigid understanding of feminism" (Marketplace interview), an understanding that has somehow detached "feminism" from its central raison d'être of gaining rights and equality for women, and made Millenials wary of adopting the name for their own.


Fifty+ years after the rise of second-wave feminism, it seems that many a woman has forgotten, or never been taught, about the historical context in which second-wave feminism first arose. It rose at a very particular moment in time—as a reaction against post-WWII culture, with its widespread idealization of a non-working mother and a wage-earning father. In fact Betty Friedan's The Feminine Mystique (1963), which first gave voice to second-wave feminism, argues that American media in the 1930s featured far more positive depictions of working women than did the media of the 1950s. Friedan pointed to the limitations of the 1950's belief that a woman's only path to fulfillment was through being a housewife and a mother. Her book's conclusion advises women to stop viewing housework as a career; to stop expecting motherhood and marriage to fulfill all their needs; and to search for meaningful work that draws on their intellectual, as well as their emotional, abilities. It never urges heterosexual women to throw out their boyfriends and husbands with the bicycles and fish, to cut all heterosexual relationships out of their lives. It doesn't call married women, or women in heterosexual relationships, gross or accuse such women of not toeing the proper feminist line. Later more radical iterations of feminism might espouse a feminist separatism, urging women to cut men from their lives, but such ideologies were always in the feminist minority. 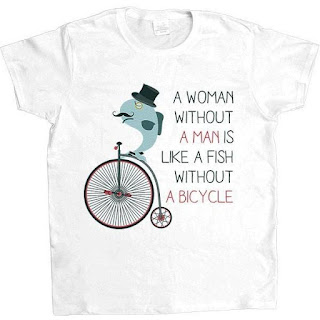 Snyder's own novel argues against Pinky's momentary negative self-labeling. For while she may be in a temporary funk at novel's start, she's clearly not a woman who views marriage, motherhood, and housework (or working in her parents' restaurant) as the only fulfilling career option available to her. Nor does she expect her relationship with Trucker to fulfill all her needs. And near the story's end, she's back in Chicago, once again pursuing her intellectual interests—initially on her own, without Trucker.

Earlier in the story, Pinky actually provides the best answer to those who would falsely pit feminism against heterosexual romance. Trucker says to her: "I could do this all night. Hold you in my arms. But you're not here for that, are you? You're here to be fucked by the bad boy." Pinky thinks to herself, "The words were a low growl against my jaw. And I wasn't sure who he was mad at. Me or himself." And then challenges his assumption: "Why can't it be both? Can't you hold me and fuck me?" (352)

You can work towards gender equality and be in a heterosexual romantic relationship. Both and, not either/or.

And you can call yourself a feminist, too.