As readers of RNFF know, I'm not a big fan of the romance novella form (see an earlier post here). But I do love a well-crafted short story. Not something that comes across as an underdeveloped novel, as so many romance novellas tend to do, but a tale that has the tightness of focus and unity of effect that Edgar Allan Poe, one of the earliest and most talented practitioners of the form, identified as central to the form. And when my purchase of a collection of short stories has the additional bonus of having its proceeds going to support a praiseworthy feminist organization, well, you can just about guarantee that I'll have my wallet out and ready.

But I wouldn't write about any book here on RNFF solely because of its charitable intentions. A book has to strike me as feminist not just in the cause it supports, but also in the stories it tells. I'm happy to report that the recently released romance story anthology Summer Rain, published in support of RAINN, The Rape, Abuse, & Incest National Network, fits both criterion to a T.

Surprisingly, perhaps, given the organization the book was published to support, few of the stories in Summer Rain feature protagonists who are coming to terms with past sexual abuse. Only RITA Award winner Molly O'Keefe's contribution, "The Heart of It," includes a protagonist/survivor (a hero, not a heroine) whose is working to understand why, despite an incredibly supportive network of family and friends, his relationship to his own sexuality is still so fraught. That O'Keefe is able to pair such a hero with an upscale call girl as heroine and still avoid drawing on the stereotypical, and often sexist, hooker-with-a-heart-of-gold trope demonstrates not only her strong skills as a writer, but also her familiarity with current activist work on the rights of sex workers to be treated as human beings rather than simply pathologized as agency-less victims.

If sexual abuse is not a prevalent them of the collection, many of the stories do focus on the related issue of consent in sexual relationships, exploring this issue in both fantastic and realistic settings. In "Real Feelings," Charlotte Stein wonders if, and how, an android created specifically so that a human can "Experience all the joys of a real relationship, without any of the risks" can ever grant meaningful consent. In "Sacrifice," Cecilia Tan imagines a more feminist son for god/serial rapist Zeus, a demigod who searches for a way to fulfill his role in fertility rituals that will not include coerced sexual coupling on the part of his partner. And in "Redemption," Ruthie Knox explores the ways that consensual role-play focused on coercive sex can offer a woman a needed respite from the failures that keep piling up in her life.

Rain, though, rather than abuse, serves as the unifying theme of the collection, the warm rain that brings relief from summer's scorching heat, from the pain of misunderstandings between lovers, from the vulnerability to words said in anger. Impending thunderstorms seem like a sign of potential rebirth to a former artist turned barista in Mary Ann Rivers' "Rainy Season," the story of a woman who takes a chance to find out why a certain customer "is so bright I can hardly look at him, and why I always want him to look at me" and ends up discovering not only him, but herself, as well. In Audra North's "Fitting In," dark, cold rain ruins an anxious, ambitious young man's attempt to win friends and influence potential voters by throwing a paintball party, but grants him the chance to find ways to move beyond shame by forcing him to spend one-on-one time with a woman whom he'd always thought of as the must-be-avoided "weird girl." And in perhaps my favorite story of the collection*, Shari Slade's "Private Study," a fierce downpour serves as fitting punctuation as a once-sheltered young woman demands with biting courage that the boy with whom she begins a tentative relationship admire rather than be ashamed of her newfound love for sex education, and treat her neither as a damsel in need of rescuing nor as a whore who should be feel guilty about her own sexual desires.

It's rare to find a volume that both supports a feminist cause and tells stories that help readers imagine what a feminist heterosexual relationship might look like. If I wish that the anthology had includes some stories with same-sex couples, and with more characters of color, that is not to take away anything from power and beauty of the accomplishments of these talented, politically-aware writers, nor from the work of the collection's editor, Sarah Frantz.

As a reviewer, I received a copy of Summer Rain for free. But I admired it so much that I'm going to purchase additional copies to give as gifts to my sisters. And hope very hard that the tagline on the anthology's cover—"Love in the Rain series"—means there are more feminist-friendly anthologies on the horizon, poised to shine out after the rainclouds clear.


*Although it is hard to whittle it down to just one, as there is only one tale in the entire anthology that did not engage both my aesthetic and ideological sympathies. 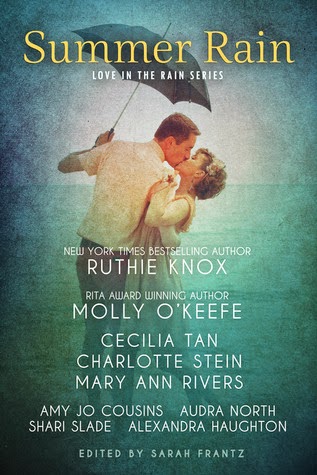 Summer Rain
(Love in the Rain series)
Edited by Sarah Frantz
self-published by the authors
2014
Posted by Jackie C. Horne at 9:00 AM