Wondering about the Feminism of Wonder Woman, the film

Last night, I had the pleasure of accompanying my eighteen-year-old daughter to see the first big-screen iteration of the iconic feminist superhero, Wonder Woman. And of sharing my impressions about the film with her, and hearing hers in response, during our ride home together from the theater.  I'd like to share a few of those responses, those related primarily to the romance aspects of the film, with RNFF readers.

But be forewarned: movie spoilers lie ahead.

I'm not a big superhero film fan myself. With the exception of Margot Kidder's tough-talking Lois Lane in the first Superman films, such movies have not been all that feminist-minded in their depiction of the love interests of their male protagonists. Serving as rescue-fodder/bait, being killed by a baddie to provide emotional impetus to a crime-fighter, or functioning as objectified, hypersexualized object for the male viewer's gaze seem to be the only roles available to female love interests in such films. The situation isn't much better for actual super-heroines who have been featured as part of superhero groups, either. So I was more than a little doubtful going in to Wonder Woman that the filmmakers would be able to overcome this sexist history of female depiction, even when given a female heroine as their lead.

Both my daughter and I were happily surprised to find far less sexism, and some outright feminist moments, in Wonder Woman. Most striking, perhaps, was the battle scene in the opening section of the film, when a troop of World War I Germans in pursuit of spy Steve Trevor land on the beaches of Themyscira (Paradise Island) and are immediately attacked by the protective Amazons. No fear, no shame, no worry appeared on any Amazon's face; each woman dove into the attack with energy and strength, wielding sword and bow with a skill any man would envy. Even as many of their comrades in arms fell to the hail of gunfire, none stopped to cry or mourn; each continued, unapologetically aggressive in their defense of their home against this onslaught of men.

I can't recall any similar scene in all of my years of film-viewing, one that depicted women behaving so aggressively and so competently, AND not fighting against one another but against a common foe. To my mind, the film would be worthy of praise if only for that one scene.

The battle does end with Diana, Princess of the Amazons, keening and cradling her dying aunt, the Amazon's general in her arms. But the scene does not serve to lessen Diana. Rather, it serves a dual purpose. First, to anoint her as her aunt's heir, the one who will take up her mantle as (in this film's mythology) the most powerful of the beings created by Zeus to help his human creations fight against the corruption of Ares, the jealous god of war. And second, to point to the film's underlying theme: the horror and human cost of war. For Diana, sheltered on Themyscira, war has only been a heroic story up until this point; the opening segments of the film depicted a battle-hungry child and teen eager to train and learn to fight her own battles. But now, Diana begins to understand not only the value of peace, but the costs of war.

On a lighter note, I enjoyed the flirting that takes place between the inexperienced but clearly knowledgable Diana and an attracted but morally upright Steve Trevor, both during their time on Themyscira and during their (improbably speedy) sail from the island to London. Diana may be a virgin, but she's not blushing over it; she's read all ten volumes of the Amazons' treaties about the pleasures of the body. From her reading, she knows that the Amazons have found ways to achieve such pleasures without the participation of males. Men may be required for procreation, but they are not required for sexual fulfillment. Does Diana wish to test this nostrum for herself? Or is she truly not that curious about the first male that she's ever seen? Both Steve and the audience are left in tantalizing doubt.

Another positive: many commentators have noted that female costumes in previous superhero films do not look as if much butt-kicking could be done while wearing them (see this great Everyday Feminist post for one example). Wonder Woman takes direct aim at this incongruity during a scene after Diana and Steve first arrive in London, and Steve asks his secretary, Etta Candy (great to see this old friend of Diana's from the early comic strip integrated into the film, albeit in such a limited role) to help Diana shop for more suitable London clothing than her Wonder Woman battle gear. Etta chooses one beautiful Edwardian outfit after the next, but grows increasingly frustrated as Diana kicks, punches, and stretches while trying each one; her main criteria is how easy (or not) the garment will be for fighting in. Her final garment of choice, a dark coat and long skirt set, buttons all the way up to her chin, neither revealing, nor highlighting through an overly tight fit, her bust, the main eye-candy for the majority of past screen superheroines.

Joined by a multicultural cast of male colleagues (a French-Morroccan actor; a Native American tracker; a Scottish marksman), Diana and Steve take off for the German front, seeking to destroy a secret weapon being devised by a German general and a facially-scarred female scientist. My daughter, a history buff, took exception to the depiction of the Germans in the middle part of the film, particularly the suggestion that they had "enslaved" civilians. This ahistorical enslavement serves as plot device, the vital impetus to Diana to go off-plan and rush to the rescue of innocent villagers, thereby proving not only her superhuman strength, but also her connection to the plight of those caught in war's crossfires. She did appreciate the fact that the one member of the group who cannot perform his military function is not Diana, but one of the men; vulnerability is coded not as female, but as male, and pays a historically accurate nod to the shell shock (what we would now term PTSD) which first emerged during World War I.

Despite its feminist strengths, though, my daughter and I both felt that the film missed some additional feminist opportunities, and, toward the latter parts of the film, sometimes undercut the strong messages it had set up earlier. After their rescue of the enslaved village, Steve and Diana watch the villagers sing and dance in celebration. Steve invites Diana to dance, and he then walks her to her hotel room. Are they going to kiss? To tryst? No words are exchanged, here, but the decision all seems to lie in Steve's hands. They both enter the room, then Steve turns back, as if he is going to leave. But then he shuts the door and turns back to a silent, receptive Diana. And... we cut to the next scene. No room for talking about sex, no room for depicting sex, not in this film. With all the weight hanging on the film to depict women positively, did the (male) writer and (female) director find it too difficult/fraught to imagine what a sex scene between their female superhero and their male human might look like? A disappointment, this refusal to engage more directly with Wonder Woman's sexuality.

Another disappointment is the disappearance of female solidarity portrayed at the start of the film. With the exception of the brief appearance of Etta Candy, Diana proves the only woman character to engage in the battle to stop the Germans from deploying their deadly poison gas.

Diana is convinced that once she kills the god Ares, the world will be free once again from strife and violence. Smart viewers will know that the person she tags as Ares is not in fact the god of war. My daughter and I were rooting the actual Ares to be revealed as the one female antagonist in the film, Dr. Maru, the German scientist also known as Dr. Poison. Only after reading a bit more about Wonder Woman's past, and discovering that Maru closely resembles a foe of the superheroine in her early comic book days, did I realize that the good doctor will likely be playing a role in future Wonder Woman/Justice League films, and so could not serve as the real Ares decoy. But wouldn't it have been great if Ares, like Diana, had turned out to be a woman?

The emotional heart of the film's climax was intended to be Diana's "coming-of-age," her recognition that despite humankind's fallibility, its potential not only for good but also for evil, human beings are worth fighting for. Yet the construction of the ending undercuts both the importance of this message, and the message itself, in seriously disappointing ways. First, the film keeps cutting back and forth between scenes of Diana combatting Ares, and scenes of Steve fighting to keep the Germans from bombing London with their deadly poison gas. Unfortunately, it is Steve's poignant sacrifice, rather than Diana's successful battle, comes across as far more emotionally powerful.

Second, it is Steve's words of wisdom that Diana gives voice to at her moment of insight, making it feel as if she is only learning what the male in the film needed her to, rather than something she has come to understand for herself.  She fights for "love," she declares. But her her memory dips back to Steve telling her "I love you." I wanted to believe she was fighting out of love for of all humankind, warts and all. But this flashback makes it seem more like she is inspired by the love of a good man.

And finally, Diana's success in defeating Ares is due not to her own power and fighting ability, but rather to her ability to turn Ares' own strength back against himself. The film's depiction of a primarily defensive, rather than aggressive, Wonder Woman echoes the construction of the comic book's heroine: Wonder Woman fought for peace, and against violence, and was known for never killing her antagonists (at least until the end of Wonder Woman series #2, in the early 2000's). But given the film's early construction of Diana as a fierce fighter, and her killing of the mistaken-identity Ares without consequence or scruple, this defensive posture towards Ares struck both my daughter and me as rather unsatisfying.

All in all, a far better film that either of us had been expecting. But still, one that has not quite managed to throw off the weight of sexism and misogyny that has haunted superhero filmdom for far too long. 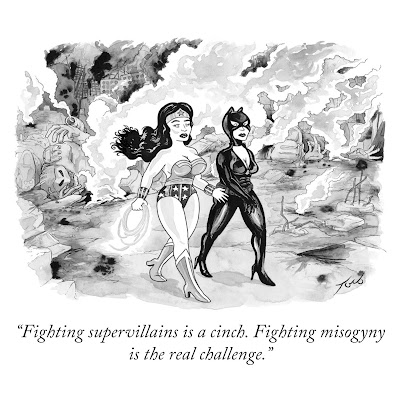