I've been getting a lot of phone calls from the media the past two weeks. Not, alas, because the press has discovered a sudden interest in romance novels. But because I attended Yale in the 1980s, and lived in the same dorm freshman year as the current nominee to the Supreme Court, Brett Kavanaugh. At the time, Yale had about 10,000 students, 5,000 undergrads, 1200 of them first years. With 12 residential colleges (think dorms, but each with its own culture, governance, and community), that meant about 100 freshman were assigned to share the same peer group. Each cohort shared a dorm on Old Campus, the quad where the majority of first years lived.

I became good friends with a handful of the 100 who were assigned, like me, to Ezra Stiles College, and who all lived in Old Campus's Lawrance Hall in the fall of 1983 and spring of 1984. I was nodding acquaintances with many of the others. But while I recognize both Kavanaugh's name and photograph today, I never numbered him among either of those two groups back then.

Most of the reporters lose interest after I tell them that I didn't really know Kavanaugh, and wasn't part of his friend group at the time.

Others, though, have been asking more generally what it was like to be at Yale in the mid 80s. "Is this the Yale you remember?" "Did anyone talk to students about sexual harassment?" "Would you have known how to report it if something like that happened to you?" "Did the sexual misbehavior at the party that purportedly happened one entryway over from yours in Lawrance Hall seem probable? Likely?"

All these questions have got me thinking a lot about those early college days. And talking to a lot of my college friends about what it was like then, and how things are different (or the same) now. Especially when it comes to issues of gender.

There is a huge difference between how Yale dealt with rape and sexual harassment and misbehavior then, and how it does now. Date rape, or acquaintance rape, was a relatively new concept in the public consciousness when we arrived on campus in September of 1983. My spouse (who is also Stiles '87) remembered reading an article about the concept in the Yale Daily News sometime during our first or second year. His memory set me off on a search of the YDN archives, which turned up this article, the first of a two-part series, in the February 28, 1984 edition: "Victims talk about acquaintance rape." The article opens with these disturbing words:

There are no full statistics available on rape between students at Yale anywhere—not at University Health Services (UHS), not with the Yale Police, and not in the Yale Dean's office. There is no mention of rape in the 1983-84 Undergraduate Regulations. There is no procedure for a victim to file a formal complaint of rape with the University.
But there is rape between students at Yale. (page 1)

To the best of my memory, no one told any of us during our early days on campus what to do if someone sexually assaulted us.

Many of us female undergrads had been raised in homes or in cultures where the idea of harassment or assault was never broached, either. Or, if it was, it was framed as the girl's/woman's fault. As the director of the Rape Crisis Services at the New Haven YWCA reports in the YDN article, "When a rape is committed by an acquaintance, it is sometimes difficult for the victim to convince others as well as herself that it was a rape."

I don't think it likely that an incident such as the one Deborah Ramirez describes would have been "the talk of the campus," as Kavanaugh recently opined in an interview with FOX News. And even if it had, who would have known what to do about it?

Nor does it seem at all surprising that Ramirez would not have talked about the incident she describes occurring with anyone else, friends or people in authority. The YDN article features the stories of two Yale women who talked about being raped by fellow students, mentioning that one made a formal complaint about the incident to the Yale College Executive Board, "which is comprised of Yale students, faculty, and professors" and which "hears complaints ranging from library offenses to assault and coercion" (3). Part two of the article, in the 2/29/84 edition, describes the adjudication of that case. "Donald" (names were changed in the article), the alleged rapist, was determined to be guilty by the Board; "as punishment, they banned him from living on campus and participating in any college ceremonies, including graduation, and suspended his diploma for six months." Allison asked that "Donald" be forced to attend counseling sessions, but the Board had no authority to order such a thing.

And at Commencement later that spring, Allison saw Donald receiving his diploma. When she contacted the Yale Dean's Office, she was told that "Donald" had later appealed the Board's decision, claiming that "since one member of the Executive Committee had been assaulted in the past, this had biased that Committee member and the Committee, against him," "Allison" was told. Because of this, "Donald's" punishment was lifted.

No one informed Allison of either of Donald's appeal, or its result.

The article ends with a call for Yale to make "a greater effort to deal with the problem of rape between students" (3): first, acknowledging that it happens; second, setting up a special Committee to address the issue; and third, that they inform students of how to report such acts.

Is it any wonder in such an environment that a young college woman would not report a less severe act of sexual misconduct?


For those of you who attended college in the 1980s, do you remember if/what you were told during your first year orientation about sexual harassment and assault? Did your college have a procedure in place to report rape? Sexual misconduct and/or harassment? When did it institute one?

And what is the earliest romance novel you can remember that deals with sexual harassment/misbehavior in a college setting? 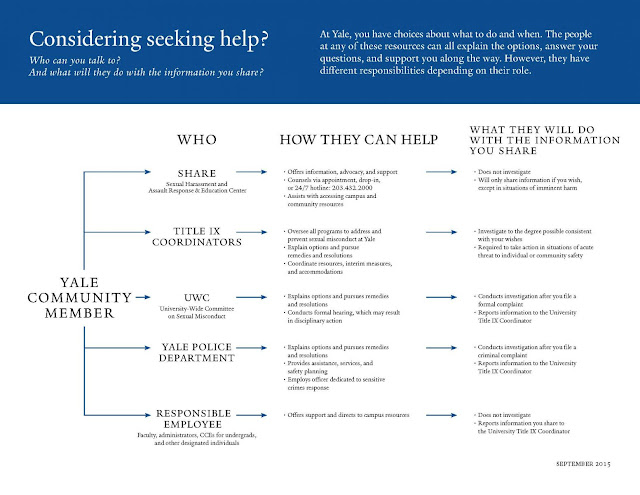