Sex Roles in and out of Bed: Victoria Dahl's START ME UP

So opens Victoria Dahl's provocative contemporary romance, Start Me Up. Hardly an auspicious beginning for a reader in search of feminism in her romance reading, a reader might be forgiven for assuming. But Dahl, sneaky writer that she is, has baited her readers only to switch the linguistic rug out from underneath them. For if you read past that offensive opening line, you discover that the  sexist language comes not from the mouth of an overbearing male, but from the raunchy lips of Molly, the best friend of the novel's protagonist, Lori. As the opeing scene progresses, and Molly's comments grow increasingly lewd, car mechanic Lori joins in, adding her own sexual double entendres to the mix. Molly and Lori thus use a technique common to traditionally oppressed groups: re-appropriating the language of the oppressor to undermine its power. Molly and Lori subvert the restrictions of sexist languge by making it an object of humor.

With her novel's opening scene, then, Dahl signals her book's feminist concerns: not just to laugh at, but to explore the limits and powers of conventional gender roles. In the novel that follows, Dahl proceeds to give readers not only a laugh-out-loud funny story, but also a thoughtful model of ways to undermine the power differentials that mark out "feminine" and "masculine" roles.


One model Dahl provides is an acknowledgement that women have sexual desires separate from, and prior to, any particular male object. Conventional wisdom takes it for granted that heterosexual men desire sex, regardless of whether or not there is a particular woman to whom they are attracted. But it simultaneously implies that a woman's sexual desire appears only after a man steps onto the stage: not "I want," but "I want you." Romance novels all too often buy into this false belief about the differences between male and female desire. Women do not want sex, we're supposed to believe; they want a man. The man turns them on, makes them feel sexy, makes them want to engage in sexual activity, rather than some drive or desire inside them that exists separate from any particular partner.

Dahl openly questions such assumptions about female sexuality by having her protagonist, Lori, openly discuss her wish to "do someone" (42). When friend Molly eagerly asks which man Lori has in mind, Lori answers, "I don't know who I want to do. Just someone. Someone tall and strong and cute" (43). Lori's elaboration—"The point is I'm not looking for a relationship. I just want to use someone for sex" (52)—humorously turns traditional gender stereotypes on their ear. But it also makes it crystal clear that her sexual desire exists prior to, and separate form, any specific male object. 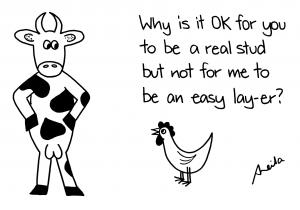 Dahl acknowledges, though, that the sexual double standard often makes it difficult for a woman to be so straightforward in discussing, never mind acting upon, her own sexual desires. After she mistakenly believes that Molly has told her brother, Quinn, about Lori's desire for a sexual fling, Lori backs off, claiming it was only a joke. Even after Quinn, a former nerd who has always been too absorbed in his work to be a good boyfriend, tells her he'd like to have meaningless sex with her, Lori, embarrassed, initially refuses. Finally, realizing that she's tired of being so passive, Lori takes the plunge and asks Quinn to be her friend with benefits.

During their subsequent affair, Lori often has difficulty telling Quinn just what she wants sexually, too shy or self-conscious to speak of her own desires:

If this were one of her books, she'd put a stop to this dinner business. She'd unzip the back of her dress and strip down to her brand-new underwear and matching bra. Tell him all she wanted to eat was him. Tell him she wanted it hard and fast and now.
But she was just Lori Love, girl mechanic, and she didn't have the guts to put what she wanted into words even if it was the whole point of this date. Pitiful. (95)

I, for one, somehow bought into the idea that because my desire had been created by a man, he should also be able to satisfy that desire without any direction from me. Such assumptions set me, and all women, up for disappointment, Dahl's novel argues. Dahl uses Lori's character development to move Lori, and through Lori, her readers, beyond the fear of speaking about what turns us on. Lori learns it is more than worth it to take an active role in expressing one's sexual desires, rather than passively waiting for a partner to magically intuit them. Like Lori, women need to grab the courage to tell their partners what they like in bed:

Lori clenched her eyes shut. She couldn't possibly ask him [to speak Spanish during sex].
"Please," he murmured.
This was supposed to be her fantasy. If she couldn't ask for what she wanted from Quinn, right here, right now, she'd miss her chance to live a dream. Lori held her breath and gathered up her courage and whispered into his shirt. (182)

The most surprising lesson Dahl's book taught me is that the role one prefers in bed may be radically different than the role one prefers to take on in day-to-day life. Quinn reads Lori's book of short story erotica, taking special note of the ones she's marked as her favorites: "There'd been a clear common thread in the two stories she'd liked. Both heroes had been aggressive. Not rough, per se, but not the least bit tentative in getting what they wanted" (133). In fact, Quinn discovers, Lori fantasizes about being tied up during sex. Though Quinn, who's been a polite, considerate sexual partner in the past, is a bit nervous about taking on a more dominant role, he gamely gives it a try, and the resultant sex is explosive for them both.

But whenever Quinn tries to take on the "saving the damsel in distress" role in real life—acting overly protective of Lori, wanting to pay for her to travel as she's always dreamed of, asking her to give up her life to move in with him—Lori immediately takes offense. She may like a decisive, take-charge sexual partner, but that doesn't mean she's eager, or even the least bit willing, to cede her control over everyday decisions to him. Lori and Quinn's relationship can only move beyond being friends with benefits when Quinn can see that "there weren't any wussy heroes" in the erotic stories Lori likes, but "there weren't any damsels in distress," either. "Lori didn't need saving any more," Quinn realizes, "but maybe it wouldn't hurt to ride up on a stallion and ask if she wanted a ride" (251-52).

Many women believe that being a feminist means never being weak, always being in control, even in their fantasy lives. This is a message I for one internalized, even if it wasn't ever directly stated in any feminist theory I'd read. But Dahl's novel shook up my belief, arguing that while feminism may insist that women be given the opportunity to take on a role of power in their sexual and romantic relationships, it doesn't demand that every opportunity be taken. Particularly when it comes to the roles we choose to play in bed.

Next time: What can a feminist get from reading romance?