After logging a few too many hours in doctors offices and hospital waiting rooms (on behalf of a relative), and then coming down with a summertime cold in the aftermath, I was in dire need of a lighthearted, funny, but not mindless romance read. Lucky for me, I happened upon the small town romance books of new-to-me author J. L. Merrow at just the right moment. Merrow's Shamwell isn't the typical close-knit but decidedly middle-class small town most commonly found in romance. Shamwell is in England, not the States, and includes inhabitants whose jobs (from  teacher to ratcatcher, tax accountant to postman) and ways of speaking reflect their quite different class positions. Oh, and Shamwell has its share of gender queer inhabitants, too—non-binary, homosexual, bisexual, and presumably straight but surprisingly open to unexpected attraction to a member of the same sex inhabitants, rather than the predominantly heteronormative characters who typically populate small town romances. "Award-winning gay romance with a dash of humor—and no tea" is the logline adorning the home page of Merrow's web site, but these books had more than a dash of humor; they made me laugh out loud, not a feat easy to accomplish with this not-easy-to-amuse reader.

None of the four books features tormented protagonists, or deeply troubling problems that stand in the way of the romances that develop within each. Instead, Merrow gives us humorous, loving portraits of men across the class spectrum, men whose expectations about romance are challenged in funny but telling ways in their small town. 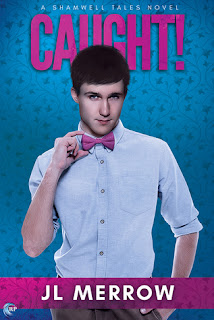 The first Shamwell book, Caught!, features bow-tie-sporting Robert, who has taken a job as a primary school teacher in Shamwell after a hinted-at but not explained dust-up at his previous post. Robert thinks there's little chance for romance in Shamwell, especially given his job: "I gazed out on the sea of female and/or wrinkly faces in the pews and wondered idly if there was any job in the world, anywhere, that was worse for meeting men than the average primary-school teaching post" (81). Yet the uncle of his most troublesome pupils (twin boys whose mother is undergoing cancer treatment) proves to be surprisingly open to chatting with him. Their initial encounter seems to get off to a bit of a bumpy start:

"Guess it's not easy being gay and teaching in a place like that."
I blinked at him. He knew I was gay? Who'd told him? No, I must have misheard him. He hadn't said that. Had he?
"Pardon?"
Sean took a step back. "Uh, sorry mate. No offense. It's just that you look . . .  Sorry."
Oh. "That's quite all right," I muttered to my brogues. My face was hot. I suppose it was only fitting that it should turn a fetching shade of pink, seeing that the rest of me apparently proclaimed my sexual preferences to the world at large. (256)


But it's not Robert's queerness, but rather his far different education and background, that bisexual Sean is commenting on:

"We're not really used to someone like you here," [Sean] said, which made me feel even worse.
"Shamwell has hitherto be a queer-free zone, has it?" I snapped.
"What? No, you got me wrong. I just meant, you're a bit of a cut above, you know?"
"A cut above what?" I asked, suspicious. If there was a circumcision joke in the offing, I was . . . I was getting paranoid, I decided.
"Well, the way you talk—the way you dress, come to that—I'd have thought you'd be teaching royalty at Eton, not slumming it here with us." (261)


Since Sean grew up in council (public) housing, never went to college, and works as a pest control technician, his class position is decidedly different from Robert's. Yet in Shamwell, crossing class lines presents almost as few problems for potential romantic partners as does being queer. In fact, it's the romance trope-y "secret from the past," not queer-bashing or differing expectations stemming from economic or educational backgrounds, that threaten to keep Rob and Sean apart. 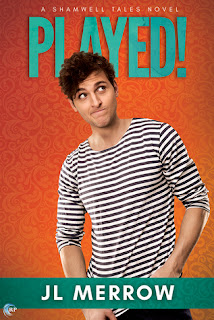 Despite their largely angst-free storylines, each of Merrow's Shamwell books asks important questions underneath their lighthearted comedy. When in a relationship does keeping quiet about some of the seamier details of one's past cross from an acceptable respect for privacy into a distrustful hiding of an important truth? When should a formerly closeted parent come out to his child? Where do you draw the line between appealingly "waspish camp and intellectual snobbery" and rude, insensitive disregard for the feelings of others? (Played! 940) Which should matter more—a long-time friendship, or protesting against thoughtless homophobia? Should you tell your fellow small-towners who assume you're sleeping with your new lodger that you're not, even if you're suddenly wishing you were?

I especially enjoyed book #3 of the Shamwell Tales, Out!, which features a thirty-nine-year-old father and a twenty-five-year-old bachelor who have radically different ideas about just how far "out" one should be. Despite finally accepting his queerness after years of living a straight life, recently-divorced tax accountant Mark chooses to move himself and his teen daughter to Shamwell determined "to put his daughter first and avoid looking for hookups while she was living with him" (371). Convinced that the divorce has already put enough stress on Florence (no longer willing to be called Florrie, but instead insisting on being called Fen), Mark is determined to keep his sexual orientation a secret from her. For Mark, "It'd been a revelation . . . seeing young men in their teens and early twenties casually kiss one another on the street after a night out. Had things really changed so much in the last twenty years? Mark couldn't imagine daring to kiss a boy on the street at a similar age" (Out! 361). And he certainly can't imagine explaining to Florrie—ah, Fen—just what another man might be doing in his bedroom . . . 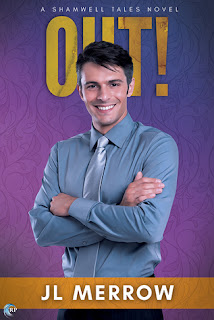 Needless to say, such an attitude seems more than antiquated to the hot guy who catches Mark's eye at the Shamwell Spartans Fun and Funds Foundation, a local charity/drinking club which Mark joins at the urging of his daughter ("For God's sake, Dad, get some bloody hobbies. You're driving me mental hanging round the house all the time" [85]). At first, quick-tempered bisexual Patrick thinks Mark's reluctance to out himself to Fen is just an excuse to avoid Patrick—"It couldn't have been that different when he was growing up. Could it?" And, even worse, Patrick reads Mark's explanation as a form of internalized homophobia: "Didn't he realise how it sounded, him lumping in nonstraight people with all the bad crap he wanted to keep away from his daughter until she was thirty or something?" (1833). Yet after Patrick talks to his mom (who is only five years older that his would-be lover) about what it was like for gay kids when she was a teen, he gets a bit more perspective, and becomes more willing to listen to (if not accept) Mark's reservations about openly dating.

Generation gap, sure, but the idea that an age difference of only fourteen years could make such a big difference in two people's experiences of their society's attitudes toward sexual identity? That made think harder about how not just class and race can affect one's ideas about sexual identity, but how age (even small differences in age) can, as well.

Gobbling up all four of Merrow's Shamwell books over the course of my three-day cold recovery made those hours go by far more quickly than my typical bout with the tissues and decongestants usually does. I'm almost looking forward to my next germ infestation—Merrow has quite a few other series available, ready for my (and your) sick-day reading pleasure. 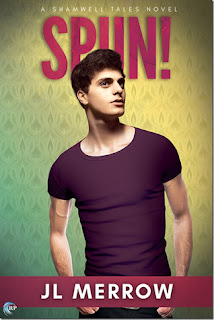