Tropetastic and Thoughtful High-Concept Romance: Mhairi McFarlane's IF I NEVER MET YOU

The high-concept/tropetastic hook: After her boyfriend-since-college unceremoniously dumps her, thirty-six year old biracial (or "dual heritage") Nice Girl Laurie Watkinson tries to make him jealous by dating the playboy at the Manchester (England) law firm where all three work.

I'm not usually all that drawn by high-concept romances, but I found If I Never Met You a real pleasure. McFarlane doesn't just play the trope for easy laughs; she digs deep into the feelings of Laurie and her boyfriend/ex Dan, and shows how a good relationship can gradually slip away without you even recognizing it (and how the relationship you thought was so great really had its downsides, downsides that because you were in the midst of it, you had trouble even seeing). She also shows, rather than just tells, why white playboy Jamie feels the way he does about romantic attachments (Chapter 13, where Jamie talks about why "I'm kind of a communist when it comes to relationships" is especially amusing), and why he urges Laurie to buy into his plan for them to fake date (the law firm wants him to "show my conventional settledness" before they give him a promotion).

What was most striking to me, though, was Laurie's gradual understanding of the gendered dynamics at work at her law firm, dynamics that shape both how she and Jamie are perceived by their co-workers. Jamie, a self-confident overachiever, refuses to conform to what his male colleagues want of him, and so he is turned into the office villain and ostracized ("Laurie saw how the trick was worked: the alleged villainy was entirely subjective, a matter of taste not substance: waltzing and swaggering. She increasingly suspected Jamie's offense was his refusal to play the popularity game"). But Laurie is valued by her male colleagues more for who she is dating than for the quality of her own work, even by the men who insist they are her friends, are looking out for her interests in warning her away from Jamie. As Laurie recognizes, "she had always been aware Salter & Rowson was a toxically sexist environment." But "she had been protected" as long as she was dating Dan. Now, though, "as a single woman, she was fair game for the rough-and-tumble of such politics. She was—apparently—daring to have carnal relations with a male the testosterone club didn't like, and that had to be punished."

Laurie also gradually realizes that Jamie's reputation as a heartless playboy is who he is ("You're an actual womanizer, snaring the unwary by doing a comic parody of a womanizer"), but it is only one side of a far more complicated, and more interesting, person than she, or anyone else at the law firm, ever thought.

McFarlane is a strong writer on all fronts: character, plot, theme, and voice. I especially enjoyed the cast of interesting secondary characters (especially both characters' parents, and Laurie's friend Nadia, an odd duck but a damned articulate feminist), and McFarlane's way with words.

"Her mother and father were opposite poles, Laurie realized; her dad said the right things and didn't mean them, and her mum might feel them, but she never said so."

"No one is going to think Hermione Granger here is having it off, big style, with Draco Malfoy"

"in the very unlikely event she found herself in love with anyone again, she'd assert herself. She'd say what she wanted, not endlessly accommodate his needs. If that made her a bitch at any point, so be it. There were no rewards for being a walkover."

"I'm sick of this perception of me as the greatest man slag of the northwest," he said.
"Then be less man slag. Bee the unslaggy man you want to see in the world."


McFarlane is a new-to-me author (perhaps I haven't heard of her because she's a Brit, and I'm in the States?), but I'll definitely be checking out her other books. 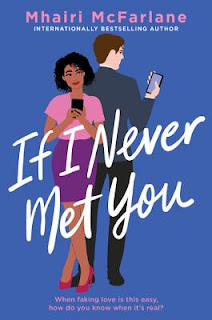 Mhairi McFarlane
If I Never Met You
Willam Morrow/HarperCollins, 2020
Posted by Jackie C. Horne at 9:00 AM