Political Disagreements and the People Behind the Rhetoric: K J Charles' A SEDITIOUS AFFAIR

My heart always sinks whenever I open a piece of mail from a political candidate, or an organization whose work has become the subject of political debate. The rhetoric deployed in such mailings is most often of the ad populum type, an emotional appeal that speaks to negative concepts rather than the real issue at hand. Such appeals tend to demonize the person, party, or organization which are in opposition to the person, party, or organization making the appeal, using overblown language to insist that if I don't send money, the world as I know it will in all likelihood come to a bitter, nasty end, all at the hands of those being demonized. While I often agree with the candidates or groups whose letters clog my mailbox, I can't help but be turned off by their insistence that no good/intelligent person ever could/should/would disagree with their position.

Being in the midst of a presidential election year (year and a half?) made me more than receptive, then, to the quite different message in K. J. Charles' latest m/m historical romance, A Seditious Affair. Its two protagonists could not be further apart when it comes to political beliefs and assumptions. Dominic Frey, God-fearing English gentleman and conservative Tory, believes in the natural order of society, with aristocrats at the top and the poor at the bottom. He is committed to his job at the Home Office, working to suppress radical and seditious calls for English government to be violently overturned. A realist, a man of means, and of power. Silas Mason, bookseller and printer, believes that the rich oppress and tyrannize the poor for their own aggrandizement. He is just as committed to his job as is Dominic Frey, although that job is the exact opposite of Dominic's: selling radical political tracts by day, printing seditious pamphlets advocating democracy by night. An idealist, a man scrabbling for means, one who must fight for every bit of power he can take.

If these two men met in the street, they'd likely sneer, or spit on each other's boots. Yet Dominic and Silas share a secret that brings them far closer than either might ever have imagined: a sexual preference for other men. In particular, men who get off on the power games involved in dominance and submission, power and shame. After they meet, anonymously, in an "assignation house," it is this shared secret identity, not the myriad differences between them, that keep them coming back each Wednesday night, week after week, for more than a year.

And soon it's not just for the sex, but for something more:

He couldn't remember which of them had started it, whose chance comment had begun an argument. Had no idea now when the first bottle had been laid out and waiting on his arrival, what day he had said, Have you read . . . and how long after that before the Tory had handed him a book and said, Tell me what you think. He didn't know when the fucking had become just one part of the night's pleasure, the thing they did before talking (238).

Charles gradually and organically reveals Silas and Dominic's different assumptions about the way the world works, both to the reader and to each other. For instance, at the beginning of the story, this exchange about their differing responses to reading Mary Shelley's Frankenstein shows their almost polar opposite views:


"I finished the book," the Tory said.
"Oh, aye? What'd you think?"
"Good. Terrifying. Strange. I can't understand why you would like it."
"Why would I not?"
"I wouldn't have thought you'd agree with it." The Tory gave him a wry smile. "After all, its burden is the need for man to keep in his place—"
"What?" said Silas incredulously.
"The overreaching man dares to play God and pays a terrible price. Abuses the natural order and creates a monstrous thing."
"Bollocks," Silas said. "That ain't what it's about."
"It's what happens."
"No. What happens is he creates, he's responsible something that should be"—Silas waved his hand—"great and strong, something that he owes a duty to. And he says to it, The hell with you. Go die in a ditch. I'll have my big house and pretty wife. And it says, You don't get to live in a grand house and ignore me. Do your duty or I'll tear you down. Treat me like I'm as good as you, or I'll show you—"
"That I'm not,: the Tory interrupted. "The creature murders—"
"Because he ain't given a chance to live decent," Silas interrupted right back. "You treat men like brutes; you make 'em brutes. That's what it says."
"No, you create brutes when you distort the rules of nature and the order of things," the Tory retorted. "That's what the book's about. It's obvious."
"It's not." (193)

Dom dislikes talk of rights and equalities, believes revolutionaries "intended to steal land from its rightful owners and share it out amongst what they called 'the people'" (367), and that the "Peterloo Massacre" is a "melodramatic nickname" for "the unfortunate incident at Manchester," "nothing more than a tragic misfortune" (305). Silas meets with those who "could no longer bear the stranglehold of the rich on England's neck" (205), and has been part of the struggle for the rights of the common man ever since "he'd had his eyes opened by Eupehmia Gordon, a radical firebrand and agitator for the rights of women, at the age of sixteen" (205).

Hard to imagine two people with such differing philosophies of life could ever find enough common ground to be anything more than casual lovers, no? Yet over the course of their weekly meetings, Silas and Dominic's understandings of one another gradually begin to change, because each begins to listen to the truth of other, not to dismiss, but to engage:

Arguing with Dom was damn near as good as fucking him. When those dark eyes narrowed in thought, when he bent that formidable determination to confront Silas's beliefs—not to ignore or dismiss, but to take them on at equal value, so that the pull of his attention became a physical thing—then Silas understood what it was to be important. (1412)

But even as they come to appreciate each other in private, by challenging each other's taken-for-granted beliefs, pointing to each other's hypocrisies, and insisting each recognize the complexity of what they've always seen as black and white issues, their public lives are putting them on a crash course for disaster. Especially when Silas finds his fellow radicals, made desperate after the passage of the repressive Six Acts of 1819, not just writing about overthrowing the government, but planning to stage an actual coup. "Pure pathetic fantasy," thinks Silas; "great chance to show the people that the repressive laws are vital" think the spies in the Home Office. And there are Silas and Dom, caught in the middle of the impending fiasco that will come to be known as the Cato Street Conspiracy.

Is it possible to disagree with respect? To become less absolute in one's convictions, to learn from those we've been taught to demonize? And yet still fight on behalf of one's principles? By way of William Blake ("Without contraries is no progression"), Charles' romance answers all these questions with a resoundingly hopeful "yes." 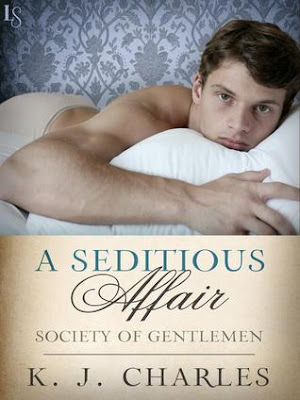