Switching Sexism's Gender? Nell Stark's THE PRINCESS AND THE PRIX

If someone handed me a romance, telling me it was about an aggressive, hard-partying, womanizing race car driver with a troubled backstory who reforms after falling for a shy, brainy philanthropist/princess, I'm pretty sure I would hand it back with a "thanks, but no thanks." Alpha-hole heroes turning over a new leaf just because they've found true love with a good girl storylines typically do not have much in the way of feminist moments to celebrate.

But what if that aggressive, partying, womanizer happens to be a woman? Well, I might just have to reconsider...

Thalia De'Angelis's life dream has been to race on the Formula One circuit. The result of a British racecar driver's one night stand with dancer at an American club, Thalia has spent most of her life being ignored by her father, and more than a little angry about it, too. She's also angry about being passed over, yet again, for a promotion from the GP2 circuit to Formula One:

Conventional—and therefore misogynistic—wisdom demanded she maintain a positive attitude and keep on keeping on. she had at first believed, and then catered to, that wisdom for years. By now, she was sick and tired of it. No one told men to suck it up and be patient. They were tacitly and explicitly encouraged to be downright aggressive in pursuit of their goals. To suffer no fools and show no mercy and take no prisoners. Why should she behave any differently, just because one key chromosome had an extra leg? (Kindle Loc 92)

So it's hardly surprising that being asked one too many times by reporters about her male teammate being given the spot on the Formula One team instead of her, despite his second-place finish in the overall GP2 rankings, Thalia's temper explodes:

Look. Terrence Delmar is not a better drive than me. He's not even close. His instincts are all wrong—he's too loose when he should be running tight and too tight when he should be running loose. Ferrari hired him for what's between his legs, not what's between his shoulders....
"Are you suggesting that Ferrari is a chauvinist organization?"
"Suggesting?" Thalia laughed into her mic without humor. "No. Asserting, yes." She stared out over the murmuring crowd. "I'll probably lose my job over this, but it's true. And it's not just Ferrari, either. The glass ceiling is alive and well in Formula One. Women have the ability to drive at the highest levels. We're not there because the owners and team managers—and even some of the drivers—don't want us to be." (121).

The reporter goes on to ask Thalia how she thinks the misogynistic culture of racing can be changed, a question to which Thalia has no good answer. Thalia's not really into being an advocate for women's rights: "she didn't want to be some pretty, quasi-famous chess piece in the struggle for civil rights. She wanted to push the boundaries of speed" (168). But her chances of doing either seem pretty slim after she's fired for her post-race outspoken words. Thalia drowns her sorrows at the after-party, drinking and picking up a grid girl for another round of energetic, no-strings-tied sex. Just like the majority of the men on the racing circuit do.

Her Serene Highness, Pomelina Alix Louise Canella of Monaco, knows all about being a role model. The least attractive, and most well-behaved of Monaco's royal siblings, Alix has spent her life serving her country, in particular by supporting charitable work. Having just completed her degree in public health, Alix is on the brink of establishing her own charitable foundation, one focused on empowering women in rural communities in East Africa. So when she meets Thalia at a wedding, then watches her race, Alix immediately recognizes that "Thalia's position in such a traditionally patriarchal sphere seemed like a golden opportunity from which to demonstrate gender equality" (842). Especially after Thalia wins a place on another racing team, a place driving not on the GP2, but on Formula One.

Thalia has participated in charity appearances, but only because that's part of her job, a means to an end: "If she were being honest, she rarely thought of anyone except herself and her own goals" (1181). When Alix challenges Thalia about her aggressive behavior—slugging a fellow driver after he "accidentally" nudged her off the racetrack—Thalia confirms her distaste for being a figure of social justice: "I like to drive fast cars and fuck fast women and drink too much and watch the sun rise before I sleep. That's who I am. I'm here to win, not to be a hero or make a point" (1453). Not even Thalia's attraction to Alix will make her change her hard-driving ways.

Does a professionally groundbreaking woman have a duty to be a positive role model, to act squeaky clean, to never get in trouble? Are Thalia's hard-partying, womanizing ways really "scandalous"? Or is that judgment "completely a product of the pervasive double standard that denied women the same social freedoms as men"? (1512) Is Thalia breaking feminist ground? Or just reinforcing male chauvinism from her position of power?

And can a woman who has no desire to be a role model even have a chance of making a romantic connection with a princess whose life has been entirely focused on working for the greater good?

I love that Nell Stark is able to ask such questions in the midst of a wonderfully appealing opposites-attract love story. And that not only bad-girl Thalia, but also unselfconfident Alix, are both given chances to change and grow as their friendship, and later their physical attraction and romance, develops. The Princess and the Prix may be a fairy-tale romance, but it's a romance that packs a surprisingly feminist punch. 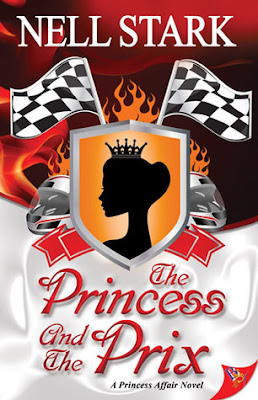