If you're not a fiction writer, you may not be familiar with this piece of advice: be cruel to your characters. But it's something that experienced authors often tell writer wanna-bes.

Why? Because conventional writing wisdom says that authors often feel protective of their creations, and so do not put them into difficult enough situations, either plot-wise or emotion-wise. Which leads to a story without conflict, without the tension that pushes readers to turn the page, and the next, and the next. As a writer, don't coddle your characters; corner them, then toss them, kicking and screaming, into the hottest water you can boil. 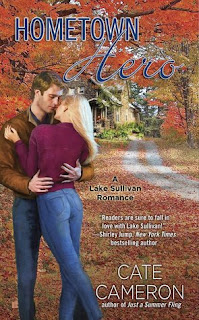 I was thinking about this bit of writing advice while I was reading Cate Cameron's forthcoming contemporary, Hometown Hero. Hero's hero is actually a heroine: Mixed Martial Arts fighter Zara Hale. Daughter of an absent mother and a perpetually drunk father, Zara grew up on the wrong side of the tracks, depending on her older brother Zane to keep her fed and safe. Zara did not so much escape her small Vermont hometown as get pushed out of it after Zane suffered a mental breakdown and went on a drug-induced crime spree, a spree that landed him in prison. Sent off to live with an aunt in New York, tough-girl Zara found solace, and then a career, in the local gym and in MMA.

Now, ten years later, Zara's at the top of her game, the reigning female MMA champion. But author Cameron has clearly heeded the conventional writing wisdom, and is not afraid to heap the bad times on her protagonist. As the novel opens, two concussions in a row have temporarily sidelined Zara. And thus she has no excuse for not going back to her Vermont hometown to keep tabs on Zane, just released from prison. And to take a temporary job at a community center, helping disadvantaged kids. No matter how little love she has for quaint Lake Sullivan and its inhabitants. Why should she put herself out for them? What did anyone there do to help her or Zane when their family was falling apart? And why should she be grateful to Cal Montgomery, town rich boy and Zane's purported best friend, for offering both her and Zane jobs at the community center? Isn't he just trying to make up for the fact that it was he who called the cops on Zane?

Zara's not into publicity, but her agent, Andre, insists that going home is perfect move, one that will both improve her own image as well as that of the MMA: "But seriously, making you into some sort of Ripley character, like from Aliens? You're a fierce warrior woman with a soft spot for kids. It's brilliant." Zara tries to argue with him—"I'm so tired of that crap. The men are allowed to just fight. They don't have to look pretty and flirt with reporters and work with damn kids!" But her sexist agent immediately shoots her feminist argument down:

"Simple question, Zara. Because, I don't know, maybe I missed something. So let me just check . . . Are you a man?" Andre paused, just long enough to pretend he was waiting for an answer. "Oh, no, you're not? Okay, next question. Do you live in a fantasy world of total equality, or do you live in this world?" Another pause for effect. "Oh, you live in this world? Then stop wasting my time with your whining and help me manage your career as a female fighter in the current universe. Okay?" (Kindle Loc 141)

Unsurprisingly, numbers 1, 2, and 3 all happen. But, (minor spoiler alert, here) to my utter pleasure, number 4 did not.

I began to wonder, then, why I had anticipated, no, actually predicted, that the book would end with Zara giving up her career. Was it because the older conventions of the genre so often demanded such a message? Because I tend toward glass-half-empty rather than glass-half-full kind of thinking? Or did it have something to do with this particular novel,  and the gendered ways in which Cameron "cornered" Zara?

I think it the answer is "yes, yes, and yes, but..." One and two are self-explanatory, but I wanted to think a bit more about #3. Because I don't think gendered cornering is something that happens just in Cameron's novel. It happens in many other romance novels, too.

Some examples to show what I mean by the phrase "gendered cornering":

• While Zara is a kick-ass heroine, we as readers never get to witness her in MMA action. How many romances have you read where the heroine is heroic offstage? Where you have to take her gutsiness for granted, at secondhand, at someone else's word? Does this diminish/undercut her impact, her power?

• The tension that exists between Zara and her love interest, Cal, lies primarily in Zara's refusal to not fight. Both Zara and Cal know that Zara is still having symptoms that might be due to her injury, symptoms that she hasn't reported to the doctors who have cleared her to fight. And with a challenger to her title already lined up, Zara isn't willing to come clean. Is it more common in romances for female characters to be told not to do something, to be put in a position where their professional goals are set up in opposition to their safety and/or health, than it is for male characters?

• I loved that Cameron, unlike many writers, calls attention to the gender constrictions that lie behind the masculine urge to protect we so often meet in romance novels:

"She won't let me take care of her, of course. But that just makes me want it even more. Because she's so strong, but she shouldn't have to be." [says Cal]
Zane seemed amused. "There's nothing wrong with being strong. It's not what you have to be, it's what you get to be." (3010)

"If she was for sure going to die, you'd be right.... But this? She's taking more of a risk than you want. That's all. It's not as black and white as you're making it out to be. So you have to ask yourself: How much of this is about loving her, and how much is about controlling her?... It's not about it being the right decision or the wrong decision. It's about it being her decision." (3413)

Unlike Zara's male agent, who did not listen to her gender critique, Cal listens to fellow guy Zane. Cal's mother second's Zane's insights, but is it significant that it is Zane, not Zara, who calls Cal on the underlying motivations behind his "protective instincts"?  How often does a woman say something and is not listened to, but when a man says something similar, he is?

• Finally, despite Zane's criticism of Cal's refusing to accept Zara's decision, and Cal's acknowledgement of its accuracy, Zara does not get to make the decision whether or not to fight herself. A handy villain shows up to derail Zara's title bid, conveniently taking Zara's choice away from her. How often do romances purport to be about women's choices, but then pull the female protagonist's ability to chose out from underneath her?


Cameron's novel ends with both Zara and Cal compromising, each giving up something for the other. But I wonder, which is more powerful? The end message of equity and equality? Or the ambivalently mixed messages that lie behind the conflicts with which many romance novelists choose to corner their female protagonists?