The last few months have been rather disappointing for me on the historical romance-reading front, with lots of heroines talking and acting in decidedly anachronistic, if not entirely unbelievable, ways. And while I enjoyed the previous three books in Loretta Chase's Dressmakers series, I did not find them nearly as witty, or enchanting, as my favorite Chase titles of the past. Given the cutesy/trendy feel of the title of her latest installment of the Dressmakers, as well as its use of the word "duke" in its title (a pet peeve I've written about before here), my expectations upon picking up my library copy of Dukes Prefer Blondes were anything but great.

What a delight it was, then, to find within the pages of this ridiculously-titled historical a heroine who, though she struggles with the restrictions placed upon society women in her time, does not become a detective, an assassin, or a spy, all with little to no social repercussion for her actions. Instead, Lady Clara Fairfax goes about her proper daily concerns, always with maid and footboy in tow—dressing to demonstrate her status; visiting the Milliners' Society for the Education of Indigent Females (of which she is a patron); and, on practically a bi-weekly schedule, saying "no" to yet another suitor's proposal. It may be quixotic of her, Clara knows, to wish for a potential husband who knows who she is, or at least shows some interest in finding out. Yet somehow she cannot bring herself to accept the long line of men who only look at her and see her beauty, merely smile instead of hearing her when she speaks. "After all, everybody knows that women did not really have brains," Clara thinks ironically to herself after turning down her latest swain (12).

One would hardly think that a man who assumes everyone, male or female, is less intelligent than himself would be likely to suit a woman tired of being underestimated by family and society alike. Yet from the instant Clara meets barrister Oliver "Raven" Radford, when she daringly visits his office in Temple Bar to request his help in tracking down the missing brother of one of the Milliners' Society's students, she cannot help but be energized by her conversations with a man reputed to be "sharp-witted, learned, and tactless to a spectacular degree" (29). Rather than the pointless (or painfully stupid) bickerfests that often pass for witty repartee in so many Regency-set romances, the arguments between "obnoxious" Radford and polite but pointed Lady Clara truly demonstrate two intelligent minds at play:

"It seems I was misinformed," she said. "I was told you were the cleverest man in London."
Westcott [Radford's law colleague] made a choked sound.
"To my knowledge, you were not misinformed," Radford said.
"How odd," she said. "Because I should have supposed that even a man with a very small brain and only the dimmest awareness of Society's million unwritten rules would realize that I'm not in a position to engage detectives. Ladies, you see, Mr. Radford, are not permitted to hire professionals, except in a domestic capacity."
"Right," he said. "I wonder how that slipped my mind. Perhaps it was your appearing here in cunning disguise. Most intrepid of you."
"I'm in disguise because ladies are not allowed to haunt the Temple in search of lawyers."
"But you do see how I might have thought otherwise," he said. "Looking at you, I might suppose an upheaval in social mores had occurred while I was busy elsewhere, getting criminals hanged—or not, as the case may be." (36-37)

Radford may be obnoxious, and insulting, but he's very much listening to what Clara has to say—and, with his biting responses, challenging her mind in a way that neither her family, nor any of her suitors, have never come close to doing.

For his part, Radford is a man of two selves: the intelligent, rational, bitingly witty self that most people are allowed to see, and the feeling, desiring, needing self, the self that Radford has long repressed so as not to give his detractors (from his bullying duke-heir-apparent cousin to his foes in court) any sign that he may be vulnerable. When he encounters Lady Clara as an adult (the two met memorably several times as children), though, that long-repressed feeling self militates to take control. Especially after one particular encounter with the lady, during which her feelings about her circumscribed role in life come tumbling forth in a surge of pent-up grief. The intelligent, courageous Clara, Radford realizes, is being stifled by her luxuriously proper life.

And thus Radford finds himself inviting Lady Clara along to places where a lady decidedly would not be allowed to go—to criminal court; to interview potential witnesses; and, most shockingly, to a police stake-out. And even, to their surprise, to church to be wed. But will Raven be able to keep his promise to Clara—that she "may make as many spectacles of yourself as you like. I'm bound to encourage you, because making spectacles is what I do"—once she is not just an unattainable wit, but his actual flesh-and-blood wife?

Clara is not a proto-suffragette, not a rabble-rouser, not a twentieth-century kick-ass heroine in Regency-era clothing. Her feminist message is more of the "personal is political" type: she, and Chase, remind us that while the marriage ceremony once included the dictate that a wife should obey her husband, it also asserted that one of the "causes for which Matrimony was ordained" was "the mutual society, help, and comfort, that the one ought to have of the other, both in prosperity and in adversity" (my emphasis added). And that the only way one can achieve a marriage with a "we" rather than only a "you and I" in it, one must be wiling to fight—or banter wittily—for it. 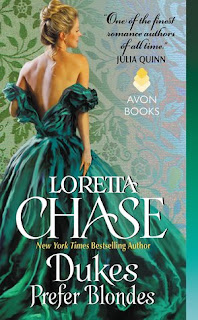