Back in the 1970s, when my early adolescent self was first beginning to become intrigued by all things sexual, I discovered a copy of psychiatrist David R. Reuben's Everything You Always Wanted to Know About Sex* (*But Were Afraid to Ask) in the midst of the other hardcovers on my parents' bookshelf. Written in 1969, Reuben's groundbreaking sex manual proved to be the first in what today has become a veritable deluge of informational/advice books on sex, and how to make it better. Its question-and-answer format covered topics few would feel comfortable discussing in public (hence the book's subtitle), yet millions, (including my 12-year-old self) felt drawn to read about in private. Scurrying away to the privacy of my bedroom, contraband in hand, I shut the door (no lock, alas) then rapidly leafed through its pages. Later, unwilling to get caught returning it, I hid the bright yellow book with the red letters shouting "SEX" under a chair in my room. 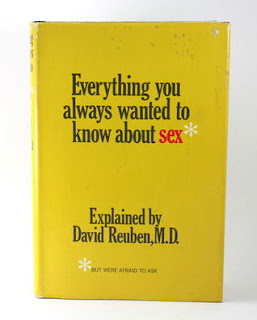 While vacuuming one day, my mother must have pushed aside the chair and discovered my secret shame. For when I later checked on my prize, I discovered it had vanished, replaced by the more age-appropriate Girls and Sex by Wardell B. Pomeroy. Mom never talked to me about it (when I asked her later, as an adult, she said that she tried, but I was always too embarrassed to listen), just quietly left that book for me to explore at my own pace.

It makes me pretty unhappy, looking back at both Reuben nor Pomeroy's books, realizing that they, as well as my dad's stash of Playboy magazines (hidden away in the basement), the almost-sex scenes in Harlequin romances, and the sexualized rape scenes in John Jakes' best-selling historical novels celebrating the Bicentennial (The Bastard and its sequels) formed the core of my early adolescent knowledge about sex. Reuben's work, though engaging and humorous, is rife with sexual misinformation (a 1972 Playboy magazine article pointed out 100 errors in the book), and insulting to lesbians and gays. Pomeroy's book is better, yet passages such as the following hardly make this feminist's heart sing: 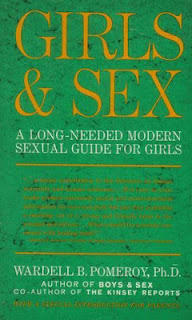 Much as feminists may deplore it, appreciative whistles from strangers on the street or from passing truck drivers are trivial. The feminists argue that such behavior degrades women by making them sex objects, but this has been so through recorded history. But half-joking sexual advances from a girl friend's father may or may not be another matter. If he puts his arm around her from behind and presses on her breasts, or strokes her buttocks affectionately, or likes to put his arms around her, it may be a hardly concealed sexual advance, but since it's done in the presence of other people. it's not necessarily dangerous. If it's done when the two are alone, however, warning signals should, and probably will, flash in a girl's mind. (50-51)

Given the above, when I recently came across blogger Clarisse Thorn's post about the "five biggest problems" with the way she was taught about sexuality by her sex-positive parents growing up in the 1980s, you can understand why I felt as much jealousy as sympathy. More to the point of this blog, however, Thorn's post, Liberal, Sex-Positive Sex Education: What's Missing, also made me wonder if and how romance novels contribute to some of the distortions about sex that Thorn claims are inherent in much sex-positive discourse.

Each of her five points is worth discussing, but I'd like to talk here about the last one, because it particularly resonated with me in terms of reading romance. Everyone recommends that you communicate with your partner about sex, Thorn notes, but no one tells you how to do it. "God, it's so hard to talk about what we want. It's even hard to talk about talking about what we want. I mean, it's hard enough to figure out what we want in the first place—but communicating it... eeek!" Eeek, indeed. I've been wondering if romance novels, despite their overwhelmingly positive depiction of sex and sexuality, in some ways might be contributing to making such conversations so difficult.

You see, in most romance novels that I've read, when you find your true love, the sex is almost always terrific. No communication between partners seems to be required during foreplay, or during the sexual act itself; there is rarely a debriefing afterwards. A hero never politely counsels, "Hey, I'm really not that turned on when you bite my nipples"; a heroine never exclaims, "No, don't do that! A finger in my ass really ruins the mood for me." Occasionally one or the other thinks about finding and touching all of the places that turn his/her partner on, but he/she rarely asks said partner directly about where to find said spots.

Of course, perfect sexual compatibility is part of the fantasy aspect of romance novels. Fantasizing that a lover can and does know us so well, so perfectly, that he/she can meet our sexual needs without our having to explain them seems at the heart of many a romance. Yet I wonder how often this particular aspect of the fantasy seeps into everyday sexual relationships as an assumption of "how it's supposed to be." I know it took me a very long time to realize that if I didn't like something my partner was doing sexually, I didn't have the right to get frustrated at him for doing it, not if I never explained to him, verbally or by some other means, that I didn't like it. Protecting his ego, or shielding myself from potential embarrassment, were simply not good enough reasons for failing to communicate.

In her sex education workshops, Thorn counsels sexual partners to ask each other questions about their sexual likes and dislikes; fill out a checklist of sexual acts and share it with one another (such as this one from the website Scarleteen); or write out their fantasies, or their previous sexual experiences, and email them to one another. I'm not asking romance writers to show their characters doing all, or any, of the above in the sex scenes they write. But it would be a refreshing change to see some romance novels that show partners in a developing romantic relationship having a simple conversation about their sexual likes and dislikes. Especially if they also showed just what a turn-on communicating with your partner about your sexual preferences can be.

Readers, can you think of romances that show the protagonists actually communicating about their sexual likes and dislikes?

Next time on RNFF:
On January 4th, a list of my favorite 2012 feminist romance titles, and a request for yours