The Feminism of a Proper Lady: Mary Balogh's A SUMMER TO REMEMBER

In last week's pet peeve, I discussed romances that mistakenly equate feistiness and feminism. Yes, often, quite often, the two do go hand in hand. But must they always? Rereading Mary Balogh's historical romance A SUMMER TO REMEMBER reminded me that a feminist novel does not by definition require a feisty heroine. Though she might be far more difficult to depict than her more popular hoydenish sister, in the hands of a gifted author a gentle, quiet, even proper lady can embody feminist principles.

If one were to search for the epitome of proper, genteel womanhood in the Regency ton, no one could serve better than the Honorable Lauren Edgeworth.* As a friend counsels Kit Butler, Viscount Ravensberg, "She is very high in the instep, Ravensberg. Someone just last week, though I can't for the life of me remember who, likened her to a marble statue, except that she came out the colder of the two" (18). Lauren can converse on any topic, setting others at their ease; is adept at needlework, sketching, singing, playing the pianoforte and myriad other accomplishments "expected of a lady of good ton (162); knows how to run a household; and can put down the pretensions of any rude upstart with cool politeness. Kit needs such an accomplished bride, or at least the semblance of one, if he wishes to avoid an engagement being forced upon him by his family, an engagement to a woman who once chose his older (now dead) brother over him. After his friends tell him he'll never be able to win such a paragon, Kit wagers them he'll take the utterly proper Miss Edgeworth to the altar by June.

Lauren, however, is not so easy to woo. Raised at Newbury Abbey with cousins Neville and Gwen Wyatt after her mother married their father's brother and left on a wedding trip from which she never returned, Lauren has always felt the need to guarantee her tenuous place in the Wyatt family by behaving with all due decorum. "I shaped my life to the expectation that one day I would be [Neville's] countess," Lauren explains (96). Even after being left at the altar by Neville, Lauren has maintained her poise:

When Kit proposes after wooing Lauren for only a few short weeks, he tells her he is drawn to her because of her beauty, and because of her reputation "for unshakable dignity and gentility and respectability. For being the perfect lady, in fact" (90). But Lauren has been through too much to believe that Kit is telling the truth when he claims to be head over heels in love with her. Instead of growing angry, however, she asks him for the truth. Kit, ashamed of treating Lauren like an object rather than as a person, explains his predicament.

To her surprise, the very proper Lauren makes Kit a very improper offer: she'll travel with him to his family seat, pretending to be his betrothed. Later, after the visit, she will throw him over. The resulting damage to her reputation (she'll be the jilt, now, rather than the jilted) will allow her to free herself from her well-meaning relatives and their wish that she marry. Instead, Lauren plans to live independently, for the first time in her life. Lauren frames her goal in terms of "rights": "I am not asking for your pity.... I need only to be accorded the privilege that men expect as a natural right—to  be allowed to live my life my way without having those who claim to love me forever knowing better than I what it is that will make me happy. I want to be alone and independent" (97).

When Kit presses her, Lauren reveals yet another reason for her unconventional offer. She recognizes that her quiet, decorous life, thought it may be dull, suits her, but

"... recently, I have felt a craving to know just once what it would be like to have some sort of adventure.... I just want to know what—what if feels like to throw off some of the shackles that bind me. Just fleetingly. I am not a person made for wild, passionate emotions. Or for vivid happiness. I just want a summer to remember. Can you give it to me?" (99, 100)

Kit, intrigued by the challenge she offers, agrees to Lauren's bargain. During the weeks that follow, Kit introduces Lauren not to the wilds of sexual abandon, but to far simpler pleasures: the joy of learning to swim in a lake; the wonder of climbing a tree and gazing at the world from above; the comfort of sharing ones feelings with a sympathetic listener; the delight in a gradually-awakening sexuality.

Despite the makeover trope common to romance fiction, Lauren does not undergo a miraculous transformation as a result of her "adventures." The text does not force her to become a tomboy, or a feisty, outspoken woman, in order to be a worthy heroine. When Kit's former love, Lady Freyja Bedwyn, scorns her ladylike accomplishments, Lauren does not upbraid her directly, but in a way that embodies the very gentility that Freyja disdains: "Ah, and I have learned the difficult art of courtesy under all circumstances. In particular I always consider it my duty when at home to set my guests at their ease and to lead the conversation into topics that will neither embarrass them nor expose their ignorance" (162). Lauren offers a similarly polite set-down to Freyja's brother, as well. Lauren also refuses to race Kit on horseback, or join in a cricket match, despite Freyja's scornful challenges, secure enough in her own sense of self that she feels no need to prove herself to Freyja, or to Kit. As Kit increasingly comes to realize, "Lauren was made of stern stuff," and "strength did not always show itself in boldness and physical action alone" (158, 171). Lauren's dignified gentility may be just as strong as Freyja's, even though it refuses to call attention to itself as such.

Lauren's training in ladylike behavior, which calls on her to set others around her at their ease, also allows her to see the tension between Kit and his family, a tension stemming from far more than a simple disagreement over a betrothal. Lauren's skill at quietly managing people, and at listening to their concerns, allows her to gradually help Kit overcome his estrangement from his family. She even recognizes how deeply wounded Lady Freyja is by Kit's abandonment, and sympathizes with her, something Kit has not been able to see.

Though quiet, dutiful Lauren and Kit, a dashing, mischief-making charmer, seem to have little in common personality-wise, they gradually discover that their characters complement, rather than contradict. As cousin Gwen tells Lauren, Kit "is such a perfect foil for you.... His carefree, laughing manner balances your quiet good sense and makes for one pleasing whole" (181). Kit respects Lauren's intelligence, and battles for her rights with her grandfather, who has kept an important family secret from her. And he respects her need to make her own choices, even if that choice means leaving him.

Lauren's "summer to remember" does not demand that she abandon her proper self; instead, it allows  her to become more herself. She can speak her own truth without fear of being shut out from her family. And at long last she can "embark on the rest of her life. Not a passive observer any longer, but an active participant" (324). And a participant who can choose a life partner not out of fear, or dependence, or need, but out of the freedom of love.

* Lauren's name evokes the writer Maria Edgeworth, a strong but quite proper lady who was one of the most respected and most popular authors of children's books during the Regency period. 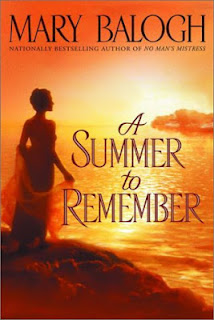 Next time on RNFF
Theorizing the male virgin in romance fiction: Some thoughts in response to Jonathan A. Allan
Posted by Jackie C. Horne at 9:00 AM