The Pleasures and Pitfalls of Being a Sex Object: Victoria Dahl's SO TOUGH TO TAME

I was talking on the phone with an old friend the other day, reminiscing over funny stories and memorable moments from our college years. There's a story my friend likes to retell, one about the time another friend of ours was complaining about having gone on a dinner date, and how the guy she was with had spent the entire evening talking not to her face, but to her chest. "You don't know how annoying it is, having guys look at you only for your body, not for your brain," she informed my friend, a guy. It being a joke amongst some in our crowd to tease this guy for his apparent lack of appeal with the ladies, my friend riposted, "Yeah, well, you wouldn't catch me complaining. Just once in my life I'd love it if someone stared at me only for my body..."

In the twenty-first century, though, women are no longer the only ones who can be viewed as sex objects. Hot male actors bare their abs and pecs, and women around the world post Facebook and Tumblr paeons to their beautiful bods. Even hotter male models do the same to sell everything from underwear to cologne, and again the women (not to mention many gay males) swoon. My friend's story made me wonder: what are the pleasures for a man of being regarded as a sex object? Are they similar to, or different from, the pleasures available to women? And are there any downsides? Would my friend really like it if it happened to him, not just once, but over and over again?

I had my friend's story, and these questions, in the back of my mind as I was reading Victoria Dahl's latest contemporary romance, So Tough to Tame. Everyone assumes that for cowboy Walker Pearce, easy on the eyes and quick with the flirt, being the go-to guy for any woman in the greater Jackson Hole area who wants strings-free sex must be as close to heaven as a guy on earth can get. Ever since high school, Walker's known just what to say to women young and old to charm the socks (or other pieces of clothing) right off them whenever he felt the need to "scratch an itch."

Yet underneath his good-natured charm, Walker's carrying around a whole shitload of insecurity. He's never been in any relationship that's lasted for more than few months—no women, especially the smart women he really goes for, think him worth more than a few rolls in the hay. He's nearly thirty, but he's got "exactly as much to his name" as he had when he left high school: "a big truck, a strong back, good hands, and some almost-promising ranch work lined up" (51). And he's not even got what everyone else from high school left with: a diploma. His dyslexia, and his own low opinion of his intellect, an opinion only confirmed by the verbal and physical abuse dealt out by his ornery father, has him believing all he'll ever be good for is what he can do with his body: lug bales of hay; rope a cow; and have sex with women, none of whom will want him to stay longer than they need to find their own pleasure. And now he's been fired from a job he really enjoyed, all because he drew the attention of the boss's cheated-on wife, and fell into making out with her more through happenstance and others' expectations than from any real desire for the woman of his own. Men are supposed to like it when women offer them sex, aren't they? Why would he say no?

When Walker's high school tutor, the smartest girl in school, returns home to take a job at a local resort, Walker's not surprised to find himself attracted to her. But just like in high school, he thinks there's no way Charlie Allingham could be interested in a guy with as little going for him as he has. But Charlie's no longer the demure sixteen-year old virgin who was too shy to act on her crush on Walker, and the two quickly fall into a steamy sexual fling. But with Walker convinced Charlie's only in it for his body—

She'd left his apartment with a friendly "Thank you," as if he'd done her a service. And that's probably all it had been to her. He'd heard that same "Thank you," before. More times than he cared to count, actually. Thanks, cowboy, that was just what I needed. (113)

—and Charlie careful not to expect too much, given Walker's ladykiller rep—

...he couldn't stop thinking of all the other thing she'd said since they'd started messing around. That he wasn't her boyfriend. That it was only stress relief. That he wasn't the marrying type and she wasn't possessive. (209)

—it's hardly a surprise that neither Walker nor Charlie can believe that their fling could turn into anything more than superficial sex. Yet Walker's beginning to wonder if "Thanks for the ride, cowboy" is all that he'll ever hear. "Yeah, he got it. And hell, he was up for a good time, but what if he wanted more than that?" (210).

At first, Walker assumes that the only way to get that something "more" is to "stop dating women who were so far above his station" (210). The smart ones, the witty ones, the ones glowing with intelligence and humor (Oh, yeah, this romance is a tasty bit of wish-fulfillment for girls who were nerdy geeks in high school :-)). Only if Walker dates the dull ones, the ones who don't make him dissatisfied with the role he'd taken on early in life, a role that once fit comfortably, but has now begun to chafe—"just a big package of physical labor" (210)—does he have a chance at experiencing something different than what the good-time guy role offers.

But what Walker really needs is to ask not for less, but for more—more from his friends, more from his brother, more from Charlie, and, most importantly, more from himself. Being a sex object certainly has its perks, perks that both Walker and Charlie have enjoyed in the past, and continue to enjoy with each other in the present. But the limits it places, on both women and men, Dahl's novel argues, means that it's only one role among many that both sexes can and should take pleasure in donning. 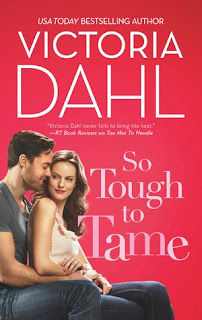