Move it or Lose it? Mary Ann Rivers' LIVE

I've not written an RNFF Pet Peeve post in some time. But reading Mary Ann Rivers' first contemporary romance, Live, made me remember one I mentioned in passing in a longer Pet Peeve post: heroines who declare to their newfound lovers, "I'll follow you wherever you go; wherever you are is my home," or other heartfelt words to that effect. Willingness to leave a career, relatives, and/or friends behind without a single look back has often been used as a measure of the depth of a romance heroine's love. In recent years, some authors have inverted the trope, making the hero, rather than the heroine, prove his love by his willingness to ditch his job on his beloved's behalf. While I appreciate the variety, I'm not convinced such inversions call into question the thinking underlying the trope itself: that one person can fulfill all your needs. While I can recognize the appeal of the fantasy of the inverted trope (wow, he loves me more than anyone, more than anything else!), I've never quite understood why women readers find the self-sacrifice of the original something to get dreamy over. And having spent some time in academia, where couples searching to put their newly minted PhDs to good use teaching are often faced with choosing to live in the same city with only one employed or choosing to teach at different universities and live apart, I've seen firsthand how excruciatingly difficult such decisions often are in real life.

Rivers' novel brought this Pet Peeve to mind not because Live embodies it, or even inverts it, but rather because it takes it as its object of study. Typically, the "I'll move for you" declaration occurs at the end of a novel, during the HEA moment, when the couple declares their love for one another. In Live, however, one of our protagonists, Welshman Hefin* Thomas, has already so been there, done that. Having met and married an American after only a whirlwind week of courtship, he followed her to Ohio, the site of her successful law career. But his struggles with immigration, and his inability to find work in his chosen field and being unemployed for two years, turned their marriage sour:

The night she came home and poured them wine and told him that he resented her, and she couldn't live with his resentment anymore, he started to say no, of course he didn't, his failure to find work in his new country was his own, his temper and his moods were his own, or were his shame that he hadn't provided for her, for them—and then he was choked by his own tears.
He cried like a child, noisy and stormy and wet, and she held him against her.
The grief was impossible. (Loc 945)

At novel's start, Hefin's divorced and working as a woodcarver (a hobby turned into a job), restoring the carvings in the library of the Ohio town where he still lives. But he's decided that at job's end, he'll be returning to Wales, so he can reconnect to his family, and find a job where his love for engineering can flourish. Such plans make it unwise to respond to his attraction to the ginger-haired woman who comes into the library every day, diligently conducting her own job search on the library's computers. Even after their meet-cute (or meet-teary), Hefin makes certain that Destiny Burnside knows that he's going back to Wales in eight short weeks. And that he won't ever stay for someone else, live for someone else again. And he will never ask anyone to make such a sacrifice for him. Better not to get involved, he tells her.

But Destiny challenges Hefin's right to make such a choice on her behalf, to protect her without her say. Des has weathered her own share of grief of late: the death of her father, the loss of her job, and the pain of a beloved sister not recovering the way she should after being hit by a car. Des wants to take the joy she can today, without worrying about the potential losses of tomorrow: "I can't stand the grief of losing something and the fear of losing something else at the same time. I can't. And since I already am living with the grief, I guess I choose not to bother with the fear" (Loc 1739). And so the two decide to spend what time they can together, to enjoy the brief weeks they have rather than worrying about what might follow.

Neither Des nor Hefin is prone to casual relationships, though, and their physical attraction soon interweaves with emotional intimacy, intimacy that convinces them this is no passing affair. Being with Des makes Hefin want "to know what it was to live beside another and still know who you were" (Loc 2268). But Des knows that Hefin needs to go back to Wales, to the sound of the sea and the love of his family and the work that fulfills a real gap in his life. And more than ever, Des needs to stay in Ohio: her siblings are on the verge of falling apart, her sister is back in the hospital, and her new career as a fledgling web designer is just starting to get off the ground. Rivers writes with poignancy of the double tug each lover feels (this example from Hefin's pov):

Was it that Destiny wasn't enough? If she wasn't, no one else would ever be. Yet his heart felt so full of her, like they were sideways, together, like the first time he was inside her, their limbs entwined, and just like that, the both of them had slipped into his heart, a physical weight, knotted and warm. How could that be and her happiness not be enough? How could he still have such a feeling of hope and lightness at the idea of his plane winging its way home? (Loc 3306).

Will Hefin ask Des to move for him? Will she ask him to stay? Is it only a question of either/or, Ohio or Wales? With an elegance of language and honesty of emotion not often found in romance, Rivers depicts the painstaking steps Des and Hefin take, the questions they ask themselves and each other, as they struggle to figure out how to meet not only their need for a lover, but also for rewarding work and for strong family ties, in order to feel whole.


* Prounounced HEV-in, according to the website Behind the Name 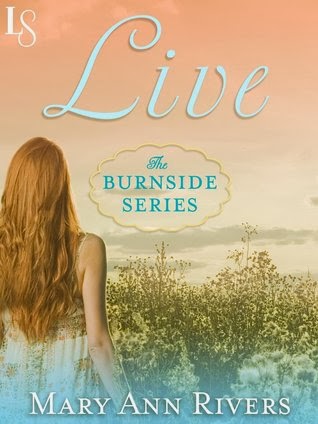