In Praise of the Slow-Build Romance: Jo Goodman's IN WANT OF A WIFE

I've often heard it said that unless a romance novel's protagonists meet within the first five pages, no agent or editor will be at all interested in reading further. In our age of immediate gratification, a slow-build romance, one in which we get to know our protagonists as characters a bit before they fall insta-love (or at least insta-lust) with each other seems almost as difficult to find as a blue limestone columbine at an elevation lower than its native alpine Rocky Mountain meadows.

Luckily for more patient readers, established writers are far less subject to such publishing truisms, especially ones that developed long after their own credentials were well-established. It was with real sense of luxury, then, that I found myself immersed in the pleasures of Jo Goodman's In Want of a Wife, a book that relied on a romance trope particularly suited to this more leisurely type of storytelling: the mail-order bride tale.

In the American West of the nineteenth century, unmarried European and Asian women were few and far between. European or Asian men who wished to marry and start a family, then, often found it necessary to employ a marriage broker, to draw upon their church connections, or even to advertise in eastern newspapers for a potential mate of their own race or culture. Once such an introduction had been facilitated, courting took place not in person, but via letter, until each party felt he or she knew the other well enough to commit to a train ticket west and to tying the matrimonial knot.

Not part of a culture that commonly employs marriage brokers, and far from being a godly man, Morgan Longstreet chooses the third option, placing an advertisement in multiple papers when he decides it's time to have a woman about his Wyoming ranch. The woman he chooses to correspond with, Jane Middlebourne, is from New York, the same place where he himself lived before being shipped west on an orphan train. Both, though, find themselves in for a surprise when Jane finally steps off her own "orphan" train in Bitter Springs, Wyoming—Morgan, because the photograph of a robust, hearty woman that he received looks nothing like the insubstantial, even fragile woman at the station; Jane, because the man's instant fear that she's somehow deceived him seems a less-than-auspicious beginning for a marriage. 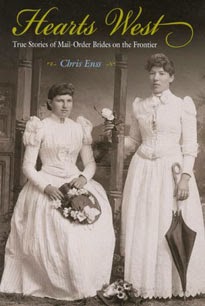 The two decide to wait twenty-four hours before deciding whether to go through with their original plan to marry, a twenty-four hours in which they spend the bulk of their time together, seeing if the person each envisioned from the other's letters comes at all close to the one looming so large in the flesh. Jane discovers a reserved man, a man used to his own ways, not used to consulting with another when making plans or decisions. But several townspeople clearly hold him in respect, even in affection, and appreciate his "dry as four-day-old cake" wit. Morgan discovers an inquisitive woman with an impressive vocabulary, polite but surprisingly plain-spoken for all her eastern primness. A woman who, in spite of appearances, is not in need of coddling, and who has more than a little wit of her own. Comfortable enough—or intrigued enough?—to overcome their initial misgivings, Jane and Morgan decide to wed.

As Morgan recognizes, mail-order brides are often "running more than coming" when they agree to move west (70), and Goodman lays out the bones of Jane's reasons fairly early in the story: an uncaring aunt, a careless cousin in debt, a pretend pregnancy to gain enough money from said uncaring aunt for a pretend abortion, enough money to both wipe out the debt and purchase a train ticket to Wyoming. Morgan, of course, has secrets of his own, secrets that he fears would endanger Jane if he were to entrust her with them. Over the course of their first months together, Jane and Morgan build a partnership in bed ("So when he kissed her this time, she held nothing back. There was no lead for him to take. She met him as a partner, a friend, a lover" [197]). But when Morgan's ugly secrets fail to remain safely tucked away in the past, can Morgan accept Jane's admonishment—that "you make me vulnerable when you try to protect me from the truth" (189) and allow her her own role in bringing the bad guys to heel?

Given In Want of Wife's appearance on this blog, you probably already know the answer to the above question. But hearing about it doesn't come close to the charm of reading it. If you're a fan of the western romance with a subtle feminist twist, I'd recommend Goodman's latest wholeheartedly. 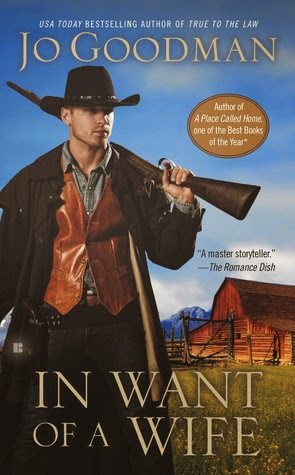