A few months ago, while doing some research for my posts on the lesbian romance nominees for this year's Lambda Literary Awards, I was excited to come across a reference to Phyllis M. Betz's Lesbian Romance Novels: A History and Critical Analysis (McFarland, 2009). F/f romance is not an area in which I had read widely, either the novels themselves or criticism about them. So I was eager to dig into a work that touted itself as both "history" and "critical analysis" of this unfamiliar field.

When I finally got my hands on a copy of Betz's book, though, I found myself more than a little disappointed.  One of Betz's primary goals is to "discover if lesbian romances differ from their straight counterparts" and "if they do alter the standard narrative, character, and thematic stresses, how are those changes made and how are they incorporated into the romantic fictional framework?" (13). In order to answer such questions, Betz first needs to define the "straight counterpart" against which she can set lesbian romance. The definition she provides, unfortunately, is more than a little dated. 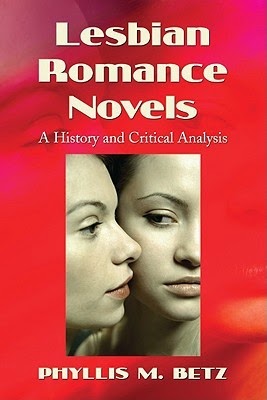 It seemed to this reader that Betz relied heavily on previous critical work about heterosexual romance, rather than her own reading of the primary literature, to construct a vision of what a "straight" romance is and does. Tania Modelski's Loving with a Vengeance: Mass-Produced Fantasies for Women (1982), Janice Radway's Reading the Romance (1984), and especially Jayne Ann Krentz's edited collection, Dangerous Men and Adventurous Women: Romance Writers on the Appeal of the Romance (1992) serve as her major sources of information on and analysis of straight romance. But as more recent scholarship on genre romance (such as the essays in Sarah Frantz and Eric Seelinger's 2012 New Approaches to Popular Romance Fiction) points out, the construction of "romance" in this earlier scholarship is both limited and limiting. Unfortunately, Betz takes this monolithic construction of heterosexual romance—alpha male dominating a submissive woman—as her starting point, a model that was an oversimplification of the romance field when it was first put forth in the 1980s and 90's, and does not even come close to recognizing or capturing the diversity of the field at the opening of the 21st century.

Take this example, from Betz's discussion of the "language of love" in straight vs. lesbian romance:

In straight romances the control of the progression of the relationship generally belongs to the hero, and while the heroine does have the right of refusal, that position is quickly overturned as he uses words and actions to court her affection. His responses, whether gesture or verbal, provide the foundation for the heroine's desires and the impetus for her behavior. Even in the most contemporary romances the heroine still relinquishes final autonomy to him. (74)

While the outcome in lesbian romance stories remains the same, with the creation of the new entity, the couple, the balance of power is reconfigured. One partner in the relationship may be offered a dominant position, but generally she does not accept it; Diana, in Curious Wine, says, "You make love with the person, not to them, when it's equal"(159).... This establishment of shared control in defining the relationship may arise from so many of the characters leaving previous situations, lesbian or heterosexual, where they were not treated as equals. (75)

If a critic limits straight romance to romances with alpha heroes and submissive heroines, is it at all surprising to find that lesbian romances tend to provide a far different, far more progressive narrative than do heterosexual ones? If Betz had compared lesbian works to straight romances published concurrently, rather than general descriptions of the genre, might her conclusions have been different?

Although reading Betz's book gave me some great suggestions for lesbian romances I might want to read in the future, in the end, it told me less about the nature of lesbian romance than it did about the current state of the scholarship on heterosexual romance. When will we see another book-length reader-response study like Radway's, one that draws on multiple groups of readers, readers of different classes, races, and sexual orientations? When will we see a single-authored work on the field as a whole, one that builds on the work of Pamela Regis in A Natural History of the Romance Novel (2003), or argues in favor of a different paradigm than the one Regis presents? When will we see a collection of essays on the appeal of the romance, such as Krentz's Dangerous Men, Adventurous Women, but written by authors who grew up taking feminism for granted rather than seeing feminism as the enemy? (I'm almost tempted to take on this last one myself—any authors out there interested in contributing?)

Until such works are published, scholars from other fields who wish to make connections with, or comparisons to, the genre romance will, regrettably, be led astray by once groundbreaking, but now sadly dated, genre romance scholarship.