A quick but heartfelt "thank you" to all the RNFF readers who recommended Miranda Kenneally's YA romance Catching Jordan as a good feminist sports read. I finally pulled the book to the top of my "TBR" pile this holiday weekend, and spent an pleasant, thought-provoking evening reading about several key months during the senior year of teen quarterback Jordan Woods. Catching Jordan can be read as an inspirational, aspirational story for teen girls, but what I found myself most interested in was the insights it offers about how boys police, and self-police, their own masculinity, particularly in the setting of sports. And how constructed such masculinity is, given the relative ease with which female Jordan fits herself into that setting.

Despite being a girl, Jordan's been the quarterback of her small Tennessee town's football team ever since her Pop Warner days. It's not the fame of her father, though, an NFL quarterback himself, that's won her her the positions of both QB and team captain, but her own far-above-average skills, both as a sportswoman and as a leader. She can throw a pass farther than her older brother could, can run an offense in her sleep, and knows just how to "keep [her] players in line," taking them to task when they fail at their responsibilities, but also offering encouragement to keep their spirits high (1). All of her teammates (none of whom are female) treat her like one of the boys, rarely calling attention to her sex. And no one laughs when a call comes from the University of Alabama, one of the U.S.'s top football schools, informing Jordan that a recruiter is coming to watch her next game. Jordan not only wants, but expects, to continue to play quarterback with the boys once she hits college, an expectation with which her teammates quite obviously concur.

Though she's been playing since elementary school, Jordan hasn't always been entirely consumed by football, and by its male culture. Back in the seventh grade, Jordan was "okay friends" with future cheerleader Kristen, until Kristen laughed at one of her football teammates when he asked her to a school dance. After convincing the rest of the team to boycott the dance in retaliation for Kristen's slight, Jordan finds herself the focus of middle school girl wrath—"Kristen told everyone that I'd boycotted the dance because no guy would ever want to dance with me." Because I was taller than all the guys... and huge. Ugly (139). After this cringe-worthy incident, Jordan wisely decides "being a guy was better, because none of my teammates would ever say anything so horrible to me." (139). An insight that proves correct; Kristen continues to diss Jordan, calling her both a slut and a dyke (behind her back, of course), and accuses her of sleeping with any number of her fellow teammates. Part of the guy code is having the back of a teammate, and Jordan's fellow football players have never insulted her by making cracks about her sex life or her sexual proclivities the way Kristen does.

But if Jordan avoids cattiness of the stereotypically feminine by "being a guy," she also has to embrace many equally objectionable stereotypically masculine qualities, qualities based on insulting the feminine. Objectionable at least to this female reader, although interestingly Jordan herself doesn't seem to see them as problematic, in large part because they're considered the norm in the culture in which she spends most of her time.

For example, Jordan takes it for granted that men should be "masculine" and shouldn't display any feminine qualities. As she suggests in this explanation for why she's never dated:

Her most common insult is the gender-based "pansy," and when members of opposing teams insult her (most often by calling her a "dyke"), Jordan knows the best way to respond is to call said opponents' masculinity into question: "The only girlfriend he'll ever have is his right hand" (61). To be a successful male is to have and control women; to be unable to attract a woman is to be lacking as a male. Jordan unthinkingly accepts, and reinforces, the positioning of women as objects, men as actors, that forms a central part of male culture.

Jordan not only accepts, but sometimes even polices, her fellow teammates' masculinity. In fact, when we first meet Jordan, she is doing just that:

"He catches the ball, spikes it, and does this really stupid dance. Henry looks like a freaking ballerina. With his thin frame and girly blond hair, he actually could be the star of the New York Ballet.
"I'm going to give him hell for his dance" (1).

Sam Henry's "dancing" may be objectionable because it leads to penalties, but it's also problematic because it hints at the feminine, something that is anathema in the context of the male-oriented football team. Recognizing this, Jordan feels it her responsibility as captain to tell Henry his actions are out of line.

Jordan also had little respect for any of the other girls at her school, lumping them all into the same "lame girl" pot as she's placed her nemesis, Kristen. For example, when Jordan comments about the missing Henry that "he's probably sleeping with Marie Baird right now," another teammate, JJ, opines, "She's a damn nice piece of ass." Jordan responds, "Don't be such a pig, JJ," but her own eye rolling, never mind her own positioning of Marie as the object of Henry's actions, suggests her rebuke of JJ is halfhearted at best. (114). And later in the book, during a co-ed game of truth or dare, when JJ dares the annoyingly feminine Kristen to "go into the kitchen and make me a steak and mashed potatoes, woman. Medium-well, please. Steak's in the freezer!"  Jordan initially protests, saying, "You chauvinist pig," but immediately ends up laughing when JJ and the rest of the boys start in (125). Interestingly, Jordan doesn't notice the reaction of the other girls in this scene. Jordan seems largely unaware that her embrace of the masculine code comes at the expense of viewing other girls not just as different, but as lesser than, the boys.

But Jordan can't entirely escape her sex, no matter how much she adheres to the guy code. She may be six feet tall, may weigh 170, but she still has breasts and a vagina. And having said body parts means she's fair game to other men beyond the accepting confines of her team, with their sexist insults such as those tossed at her by her older brother's best friend, Jake: "Not only can I teach you math, I can teach you math in bed, Jordan. You know, I'll add the bed, you subtract the clothes, you divide the legs, and I'll multiply" (29). As Jordan remarks, "This is standard Jake Reynolds behavior, so Mike [her elder brother] does the typical rolling of his eyes as I say, 'Charming' and shove Jake against the dishwasher" (29). Neither Jordan nor Mike tells Jake that such language or behavior isn't allowed in their home; to upbraid Jake for the sexism of his comments would be to reject not only Jake, but the larger culture in which all three move, a culture that is built in part upon regarding girls as inferiors, as object for their use rather than as people to be treated with respect. Jake's comments position Jordan as outside that culture, but Jordan refuses such positioning by responding with the acceptably masculine response—a verbal insult and a physical show of force. To do anything else would be to accept Jake's placement of her as outsider, rather than insider.

Others want to position Jordan as feminine, too, particularly the recruiter from Alabama, who sees her not as the perfect quarterback, but rather as the perfect fundraiser, daughter of an NFL star that she is. Jordan expects some action shots when the recruiter asks her to pose for a charity Alabama calendar, and is surprised, and more than a little put off, when she discovers that she's posing in full makeup and stylized hair, with only an oversized jersey and a pair of short shorts for a uniform. Especially when some of her younger teammates begin to position her as that dreaded feminine object: "You look smoking' hot, Woods!" (115). Only the intervention of her closest friends on the team stop the others from "disrespecting" her by positioning her as feminine object (116); first, when they block her from view, then when they distract them by offering a "show" of their own, a mocking inversion of the feminine beauty show Jordan's been asked to perform: "[JJ's] extra weight flops around as he struts up and down the sideline with his jersey thrown over his shoulder.... I crack up when JJ calls out, 'I'm ready for my photo op, Jordan!'" (117). But Jordan herself never openly objects to the way she's being treated; "I'll do whatever I have to do to play ball for Alabama" she tells herself, even while it feels "so wrong" to be positioned as object, not actor, by her fellow teammates.

The cover copy of Catching Jordan suggests that Jordan's main conflict will be "keep[ing] her head in the game while her heart's one the line"—can she both have a boyfriend and be the leader of her team? Especially when said boyfriend is her new second-string quarterback? But the real learning curve for Jordan has as much to do with recognizing how both her embrace of football, and her desire for a boyfriend, has placed limits on her as it does with balancing her seemingly conflicting roles as masculine team leader and feminine girlfriend. Only when Jordan realizes that being treated like "an equal" is what she most values, and begins to understand that girls deserve the same respect as do boys (at least until they prove they're not worthy of it), can she find the courage to reject the sexism with which the Alabama recruiter treats her, as well as the knee-jerk rejection she herself has been practicing against all of her female classmates.

Jordan still has a long way to go, feminist-wise—she still finds it all too easy to insult her fellow male football players by questioning their masculinity, for example, and the narrative doesn't suggest that she's at all aware of how sexist such insults are. But she has taken a small step in the right direction, a step for which she is rewarded by finding a love interest who can both light up her oh-so inconvenient hormones and respect her for for her less-than-conventional life goals. A fitting end to a sports romance which calls attention to the sexism underlying male sports culture, even while celebrating the strong team bonds such culture can foster. 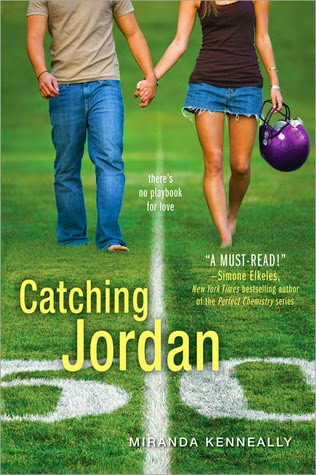