In between reading romances, I've been gradually making my way through Julia Spencer-Fleming's Clare Ferguson and Russ Van Alstyne's mystery series. Like many paranormal romance series, Spencer-Fleming's focuses primarily on plot, not on romance, with the relationship between its two main characters developing slowly over the course of the series' arc. I enjoy a good murder mystery, and the setting of Spencer-Fleming's series, a New York state small town just a few miles over Vermont border, very close to where I spent my adolescence, is certainly a personal draw. But what keeps me coming back to Spencer-Fleming's books are her two decidedly adult protagonists, 35-year-old Clare Ferguson, a former army helicopter pilot turned Episcopal priest, and 50-year-old Russ Van Alystyne, Vietnam vet and current Chief of Police in the small town of Millers Kill. 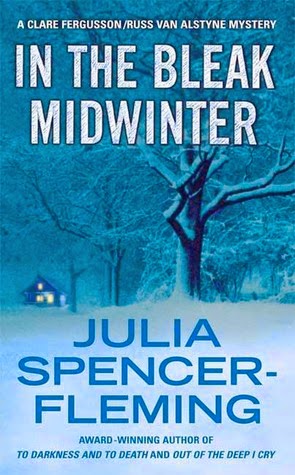 The series opens with In The Bleak Midwinter, with Clare's arrival in Millers Kill, fresh from divinity school and eager to take on her new parish duties. Clare's southern upbringing means she knows what's expected of a lady, but she's never been one for conforming to convention, whether it's her call to join the military or her call to the ministry. Not surprisingly, then, the parishioners of Millers Kill's episcopal church are more than taken aback by their new priest. Not just because she's a woman, or because she drives a sports car, or because she has framed aviation sectional maps hanging in her church office, but because she wants to extend the reach of the ministry, to serve not just the well-heeled, church-attending faithful, but those who aren't typically thought of as "deserving"—unwed mothers, teens far too likely to get in trouble in a dull small town, and the like. Since her parish's historic church is in need of a new, expensive roof, a renovation that required a major capital campaign, pissing off the congregants isn't the wisest way to go. Yet Clare's sense of pastoral duty, as well as her own driving curiosity, leads her to become involved in the town's crimes, situations that often bring less than glowing publicity to the church.

Clare meets Russ van Alsytne when a baby is abandoned on the steps of her church. After pulling himself out of a downward post-service alcoholic spiral with the help of his wife, Russ was more than a bit surprised to find himself being offered a job as Chief of Police of the small Adirondack town where he grew up. And surprised to find himself accepting it. A handful of years later, he and his wife have made a comfortable life for themselves in Millers Kill, even if Russ spends far more time at work than he does at home. Russ has a few friends in the town, but his fellow officers, as well as the police dispatcher, Harlene, are his true family.

Russ and Clare served in the military at far different times—Russ in Vietnam, Clare during Desert Storm—yet their military experiences give them far more common ground than Russ shares with his wife. And they both share a deep commitment to serving, and helping, the people of their town. Russ is initially annoyed by Clare's more intuitive, at times impulsive, approach to solving problems, but the combination of their similarities and their differences are what make them work so well together as an informal team. As each pursues the baby's missing mother, on their own and sometimes together, Clare and Russ develop an unexpectedly strong friendship. And by the end of In The Bleak Midwinter, each is beginning to realize that the other has the potential to mean far more to him/her than anyone ever has before.

Yet Russ is married, happily married, to a woman whom he loves, even if he doesn't feel as emotionally close to her as he is coming to feel to Clare. As the novels are told through multiple viewpoints, primarily those of Clare and Russ, we are privy to their thoughts about each other; even though the two do not openly acknowledge their feelings until the third book in the series, readers know how much each is coming to respect, trust, and care for the other.

Both Russ and Clare are leaders, with power and authority in their own quite different professional spheres. And both are deeply honorable people, unwilling to let their own needs harm others. Russ is committed to his wife; Clare is committed to her church. Because they are both so deeply involved in the lives of others in Millers Kill, their paths often cross; staying away from each other doesn't seem to be an option. So they choose to remain friends, committed to continuing to work together when they can, determined to keep their attraction for one another from crossing any inappropriate lines, a decision appropriate to responsible grown-ups. At 35 and 50, Clare and Russ are not impulsive young lovers. 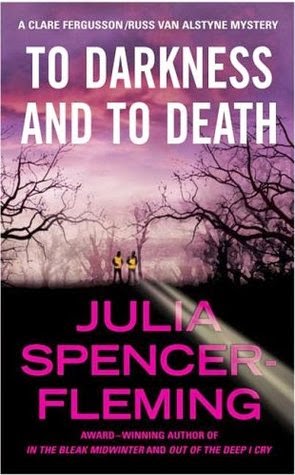 Yet Clare and Russ's sheer liking for one another can't help but be noticed by others, and by book four, To Darkness and to Death, gossip about their relationship has begun to spread throughout the town. Both Clare and Russ are starting to believe that they might need some help from others to negotiate the tricky shoals of small-town rumor and their own painful feelings. When Clare asks him if he'd be troubled if she sought guidance from someone in the church hierarchy, Russ's answer demonstrates his deep respect for her: "Don't make yourself anything lesser for me."

With the gossip rampant, Russ's own honesty won't allow him to keep his feelings for Clare a secret any longer from his wife, either. And thus book five, All Mortal Flesh, opens with Russ having been kicked out of the house by a frustrated, embarrassed, angry Linda Van Alstyne, a perfect set-up for a tense "get the wife out of the way" mystery plot.

Though she's encountered several murderers during her time in Millers Kill, Clare does not for a moment entertain the thought that Russ could have killed his wife. But she's not willing to sacrifice herself, or her sense of what is right, for him, either:

"What if I did it?" He sounded distant, as if he were talking about someone else.
"You couldn't have."
"What if I did?"
"Clare, if there's one thing I've learned in twenty-five years of law enforcement, it's that anyone is capable of anything if pushed hard enough. What if I did it and I'm just racing around trying to cover my ass at this point?"
"Why are you asking me this?"
He rocked forward in the chair suddenly, snapping it on its springs and leaning into her space. "I want to know what you wouldn't do for me."
She stared into his eyes, crackle-glazed blue. They hadn't been this close since... she cut off that thought. For whatever reason, this was a deadly serious question for Russ. Not what would she do for him, but what wouldn't she do?
"I wouldn't deny God for you," she said slowly. "I wouldn't betray my country for you. I wouldn't break a parishioner's trust for you." Without conscious intent, her hand started to curl over his. She yanked it back into her lap. "I wouldn't let you get away with it if I found out you were doing something wrong."
"I am doing something wrong. I'm evading questioning by a New York State Police Investigator."
She made a face. "That's rule-breaking. I mean wrong. Sinful. Wounding others. Wounding your own soul." (148-49)

To Russ, is it vital to know not that Clare will stand with him, but rather that Clare won't compromise who she is on his behalf. And forthright Clare has no qualms about telling the man she loves that she will never deny the essence of herself for him. 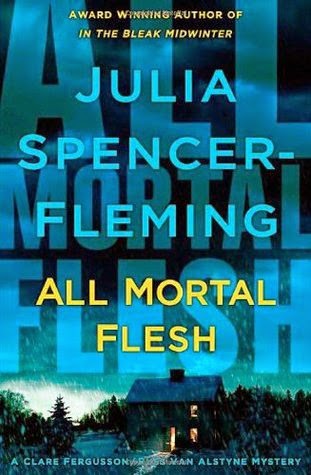 I was able to guess the true killer of book five fairly early on, even as I admired the skill with which the author scattered her clues. Yet I was still drawn in by the tension of the mystery, drawn in by Russ and Clare's own not knowing, and gradual discovering, of who killed the woman found in Russ's house. A woman who, it turns out, may not be Linda Van Alstyne at all...

Even if her murder plot is not impossible to figure out, Spencer-Fleming still has a few surprises for readers of All Mortal Flesh, surprises that leave Clare and Russ by novel's end as far apart as they've ever been. Can't wait to pick up book #6, to see if, and how, Spencer-Fleming can bring these two deeply honorable, intelligent, and loving people back together.


Are there other romantic couples in the mystery genre that have what you think of as a relationship compatible with feminist ideals?