His hand twitched against his side. Emma licked her lips. "Touch yourself," she repeated, more a whisper than an order, but he finally obeyed. His fingers, dark against his belly, slide down and curved around the dusky skin of his shaft. — Victoria Dahl, A Rake's Guide to Pleasure


Many romance novels come and go without leaving a memorable trace in my mind. But I can still remember the shock with which I read the scene in Victoria Dahl's steamy Victorian historical romance, A Rake's Guide to Pleasure, from which the above quote is taken. Emma Jensen has wormed her way into ton society, masquerading as the Dowager Lady Denmore, in order to wager and win enough at the card tables to secure herself a competence large enough to retire from society on. But her attraction to the rakish Duke of Somerhart has proven a distraction from her gambling. At a high-stakes house party, she finds herself spending less time gambling and more time negotiating a sexual power game with Hart. After realizing how much Emma is aroused by being told what to do, sexually, Hart challenges her to try out the opposite role: "You take control, Emma.... Take control of me. Come to me" (100). 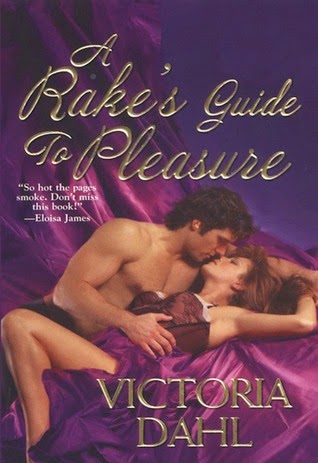 Emma, despite her better judgment, takes up Hart's challenge. But the scene doesn't quite play out the way Hart expected. Emma doesn't tell him to do anything sexual to her; instead, she commands him to perform for her. "Touch yourself," she orders him, but refuses to step any closer to the bed in which he lies. She wants to watch him, to actually witness the act with which he taunted during their first sexual encounter: "I thought about this last night. Dreamed of your taste, of you pressing yourself to my mouth. I pleasured myself to this fantasy" (83). His fantasy turned her into an object of desire; hers, not just in mind but in the flesh, turns the tables, turning Hart into the object of Emma's.

Dahl makes it clear that Hart objects to being so-objectified. When Emma first issues her command, he outright refuses. Only after he makes a move to leave his bed, and she threatens to leave his room altogether, does Hart "finally obey." And when he reaches his climax, he's not just sexually satisfied; he's shatteringly angry, snarling, "Get the hell out of my room. Now" (111).

The next morning, Hart finds himself embarrassed by having ceded control, worried that Emma will tattle to others about "his little show" (112). Hart "wanted to take back the night, or at least turn it into something else. Something he controlled, despite his challenge to Emma. Somehow this seemed so much worse than being caught ravishing a woman in the card room" (113). A man sexually self-pleasuring himself in the privacy of his own rooms is fine. A man caught tupping a woman in public is not so bad, either. But a man touching himself in front of a woman, performing not just for his own pleasure but for hers, is something for which Hart fears he'll be "snickered at" and "turned into a freak" for, if word gets around (113).

I can't remember reading another such scene, one in which a man touches his own penis, in a historical romance, or in any romance, published around the same time (Rake first came out in 2009). But now, only six years later, such scenes seem to be popping up with far more regularity. Perhaps it is only because I've been reading more erotic romance of late, but in my reading of late, I've been noticing more and more romance sex scenes in which men take their own cocks in hand. Not just to guide them into various female (or male) orifices, but as one of the many possible sexual touches that play a part in longer sexual encounters. And unlike Duke Somerhart, the men in such scenes rarely think of touching themselves in front of a woman as something shameful, something freakish. Instead, they do it with self-confidence. Such acts are presented as part and parcel of a man's acceptance of his own sexuality, his own body. And an acceptance of, even a delight in, a sexual partner's being turned on by such a "show."

Am I just imagining things, or have you noticed such a trend, too? If so, what do you make of it?