The Fuzzy Set of Romance

In his 1992 book Strategies of Fantasy, Brian Attebery proposes applying the mathematical concept of the "fuzzy set" to the question of what is, and what isn't, a work of fantasy. I've been playing around with the idea of trying this out with romance, but I'd need your help, along with the help of other romance readers.


First, though, a bit of explanation:

In classical set theory (as in many discussions of literary canons), any single element is either in a set, or it is not. Given the set {tall people}, a member is either tall, or not tall:

For Fantasy, if {Fantasy = books in which the magic is real}, then
• Tolkien's The Lord of the Rings is fantasy
• Lewis Carroll's Alice's Adventures in Wonderland isn't (because the magic turns out to be only a dream)


In fuzzy set theory, however, a set is not created based on binary boundaries (this is in, this is out), but instead on each member's relationship to a central point. Rather than saying a person is tall, or is not tall, you can talk about degrees of tallness:

For fantasy, if Tolkein's Lord of the Rings is our central point, then Ursula LeGuin's Earthsea trilogy would be fairly close to the center of the set, while Alice's Adventures in Wonderland might be further. But both Earthsea and Alice are a part of the set "fantasy."

How does one decide what should be the center point of a literary canon fuzzy set? Attebery put together a list of 40 books that he himself thought belonged to the set "fantasy," then polled fellow scholars of fantasy, asking them to rank each book on a 7-point scale:

A cool thing about fuzzy set theory: two members of the same set may have nothing at all in common with one another, as long as they have something in common with the center point of the set. In visual terms, a fuzzy set might look something like this: 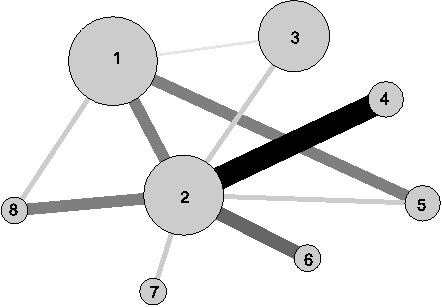 I've been wondering about the value of taking a fuzzy set approach to thinking about the romance canon, especially in light of RWA's ever-changing categories of which sub-genres are deserving of awards/recognition, and which aren't. Fuzzy set canon-building appeals to me in particular because it is a reader-based approach, rather than an authority-based one: to discover the center of your genre, you first need to poll actual readers, and get their feedback about what books then regard as central to the romance canon.

For romance, if {Romance = central love story with a happy ending}, then
• Jennifer Crusie's Bet Me is romance
• Margaret Mitchell's Gone with the Wind isn't (no happy ending)

• Cecilia Grant's A Lady Awakened is a romance
• much YA literature is not romance (because YA focuses as much, or more, on individual coming of age than on a central love story)


But in fuzzy set theory (using reader-defined "I know it when I see it" terms), both Gone with the Wind and YA novels with romantic elements could be included in the category "romance." Canon-building might look very different, depending on the group of readers one polled, and the views expressed by that group.

Attebery generated his own list of fantasies that he considered central. I'd like to take a step further back before constructing a romance fuzzy set, and ask readers to help me construct a list of "quintessentially romance" books, a list that I could then use to poll a broader range of romance readers.

I'll compile two lists of responses, then use those lists for further polling.

Looking forward to hearing your thoughts!

Email ThisBlogThis!Share to TwitterShare to FacebookShare to Pinterest
Labels: canon