Last week, those of us in the U.S. spent a day celebrating the 4th of July, the anniversary of the signing of the Declaration of Independence. Many African-Americans, though, point to a date in June, not July, as their day of independence.

As Beverly Jenkins explains in the Foreword to The Brightest Day: A Juneteenth Historical Romance Anthology, different groups of African-Americans have chosen different days to celebrate the anniversary of the emancipation of blacks from enslavement: September 22th, the day in 1862 that President Lincoln issued an official warning that he would order the emancipation of all enslaved people in states which did not stop rebelling against United States by the end of 1862;  January 1st, the anniversary of the day in 1863 when Lincoln's Emancipation Proclamation officially went into effect; April 3rd, the day in 1865 when Richmond, the capital of Virginia, fell to northern troops; and April 9th, the day in the same year that General Lee, the commander of the Confederate forces, officially surrendered at Appomattox courthouse. But in Texas, the last rebellious state to surrender to Union forces, official emancipation of the enslaved did not occur until June 19, 1865, when Union General Gordon Granger publicly read General Order #3 from the balcony of Ashton villa in Galveston: "The people of Texas are informed that in accordance with a Proclamation from the Executive of the United States, all slaves are free." In Texas, then, and in cities across the country to which Texans have migrated, June 19th, or what has come to be known as "Juneteenth," is the day chosen to remember and celebrate African American emancipation. 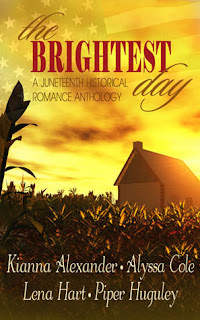 I celebrated July 4th in part by dipping into The Brightest Day, which, in addition to Jenkins' Foreword, includes four novellas each focused in part upon Juneteenth celebrations of the past: one in 1866, immediately after the end of the Civil War; one in 1875, when African-Americans were reaping the benefits of freedom under Reconstruction, often despite white resistance; one in 1910, when white oppression was once again on the rise; and one in 1961, during the Civil Rights era. The stories not only focus on budding romances, but also on the changing conditions of African-Americans in each of these quite different time periods. My favorite was the last, Alyssa Cole's "Let It Shine," but Piper Huguley's "A Sweet Way to Freedom" is particularly bittersweet for those who have already read her A Virtuous Ruby, which takes place a few years after "Sweet Way."

2015 is the 150th anniversary of Juneteenth. Since 1980, it has been an official state holiday in Texas, and since 2014, 43 of the 50 U. S. states and the District of Columbia have recognized Juneteenth as either a state holiday or a ceremonial holiday, a day of observance. As has the U. S. government. But it's a holiday that many outside of the African-American community often have little knowledge of. The National Juneteenth Observance Foundation has been organizing a petition campaign, to urge the U. S. Postal Service to create a stamp in commemoration of the holiday. If you're interested in supporting their efforts to make this holiday more widely known, you can find a petition form at their web site, here.

Or you could pick up your own copy of The Brightest Day, and share it with others who might not know about the importance of June 19th...
Posted by Jackie C. Horne at 10:52 AM