No More Mrs. Nice Girl? Kristan Higgins' IF YOU ONLY KNEW

In the romance community, Kristan Higgins has the reputation of being really, really nice. Always ready with a smile, a joke, or a friendly comment is Kristan, to fans and fellow authors alike. The first time I met her in person, at the very first romance writer's conference I ever attended, she complimented me on the dress I was wearing and asked where I got it, making me, rather than her, big name author, feel like the center of attention. Higgins is clearly in possession of what my grandmother would have called "a kind soul."

But sometimes niceness can shade uncomfortably into self-abnegation. I've long been a fan of Higgins' early books; The Next Best Thing is one of my all-time favorite romances, and I wrote about My One and Only in a previous RNFF post. But I haven't enjoyed her recent work (the Blue Heron series) nearly as much, in large part because I've been finding her heroines too abject to identify with or admire. The Perfect Match's Honor Holland is not just nursing a crush for her high school friend for years, but is secretly sleeping with him, in a friends-with-benefits situation that falls apart after Honor finally screws up the courage to ask her crush about his long-range intentions. Waiting On You's Colleen O'Rourke hasn't had a romantic relationship in ten years, ever since her boyfriend of four years abruptly told her he was marrying another woman, with no other explanation. In Your Dreams's Emmaline Neal, a tough-on-the-outside-only cop, is dumped by her once-fat boyfriend after he loses the excess poundage, rejecting her in favor of his fitness-mad trainer. Higgins has always been known for her humor, but in these books, I often felt that I was being asked to laugh at these women in their painfully ridiculous situations, as much as I was being asked to identify with them. I know a lot of people like this sort of humor, laughing at ridiculously inept women—witness the popularity of television shows like I Love Lucy and Laverne and Shirley (I'm sure those of you who are more pop-culturally literate could name a slew of more contemporary examples). But for me, being asked to adopt such a readerly position does not make me laugh; it makes me squirm with discomfort and shame on behalf of the women being made fun of.

Interestingly, the Blue Heron books were the first in which Higgins adopted a dual point of view, half of her story told from the POV of the heroine, half from the hero. To me, it almost felt as if to make room for her heroes' voices, to make them seem heroic even when we were seeing inside their more vulnerable, human selves, she unconsciously found herself diminishing her heroines. To make them so nice, so silly, that they almost disappeared as people.

It struck me as significant, then, that while Higgins' latest book, If You Only Knew (which is not part of the Blue Heron series) contains two different points of view, they are not those of the heterosexual romantic pair. Instead, they are those of two (presumably white) sisters, both of whom are negotiating major difficulties in their married lives. Or, in the case of younger sister Jenny Tate, negotiating her relationship with her ex-husband. And the woman he married only a few short months after his and Jenny's divorce. And the baby her ex and his new wife are about to have, the baby that her husband always told Jenny "he wasn't sure the time was right, and he loved our life the way it was" (Kindle Loc 56).

Of course, since Jenny is the ultimate nice girl, she's stayed friends with Owen, has become friends with Ana-Sofia, and, when the novel opens, is attending their baby shower. Even Jenny herself terms such behavior "pathetic" (49). But still, she can't seem to stop herself; "I want so much to hate her—to hate them both—but they're just too fucking nice" (909). And so Jenny, in turn, continues to feel compelled to be nice in return—so nice that she ends up helping to deliver Ana-Sofia's child when the baby arrives unexpectedly early.

In comparison to her gregarious younger sister, shy Rachel seems to have reaped the rewards, rather than the pains, of being a nice girl. She's got a loving husband with a lucrative job, a beautiful home in the New York suburbs, and, after months of fertility treatments, triplet girls whom she loves almost more than she can bear. But Rachel's niceness does not allow her to see, never mind acknowledge, the fissures in her perfect life. Being a stay-at-home mom is all that she's ever wanted; admitting that taking care of triplets on her own might just have brought her one inch away from the "moms who look fifteen years older than they are. Who have inches of gray roots showing, who wear their husbands' clothes and smell like stale milk and spit-up, who are weepy and exhausted" is terrifying (209).

Confronting her husband when she suspects he's having an affair is the last thing that always-make-peace Rachel wants to do. Taking him back after such a transgression would have once seemed impossible. But now that she's so enmeshed in her suburban life, Rachel finds herself reconsidering her former unconciliating stance towards adultery. Wouldn't a nice wife forgive?

While If You Only Knew creates not one, but two female protagonists who are as ridiculously nice as Higgins' Blue Heron heroines, this book doesn't just feature overly nice women; it takes on the issue of female niceness itself, calling attention to its self-erasing tendencies in the lives of too many women. Though Jenny does find romance by book's end, If You Only Knew is more women's fiction than romance; both Jenny and Rachel coming to understand where the line between being nice and being too nice lies. While that line may be different for each sister, both ultimately negotiate a way to retain their self-identities as nice women, but women who simultaneously do not allow their very niceness to allow others to take undue advantage.

It made me smile to see that Higgins' recent Publishers Weekly apologia for the romance genre was entitled "Never Read a Romance Novel? Grow Up." Because there's no phrase "Mrs. Nice Woman," is there? It's only ever "nice girl." Girls (especially in America, white girls) who are only all too often taught to be nice to the point of erasing their own needs, never do grow up, do they?

So happy to report that Higgins's fiction is back to hanging out with the grownups, too. 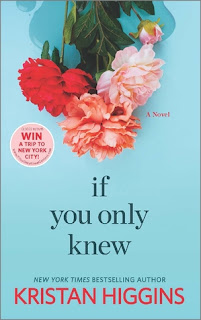 Kristan Higgins
If Only You Knew
HQN Books
2015
Posted by Jackie C. Horne at 9:00 AM