On Being a Racist White Ally in Romancelandia

The first time I can remember being called out for making a racist statement was in the early 1990s, while I was working for a major Boston publisher in the Editorial department of their children's books division. The publisher, a bastion of Boston Brahmin whiteness, was conducting a survey of its employees about issues of diversity. One question asked something along the lines of "Why do you think so few minority candidates apply for entry-level positions here?" As I white person, I remember imagining a first-generation black college student, whose family had scrimped and saved to send her to college, and wrote that perhaps minority students felt pressure to take jobs in industries that paid better than did publishing (my starting salary in 1987 was $14,100). 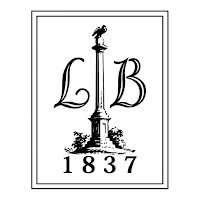 Later, I was speaking to a colleague whom I considered a friend, one of the handful of women of color who worked for the company. She had offered (or perhaps been appointed to serve on), the committee investigating diversity issues for the company, and was talking about the results of the survey. She mentioned the question from the survey I wrote about above, and expressed her dismay with the very answer I had given. "Why do people always assume that black people are always uneducated? That if they have a degree, they must be the first in their family to have attended college? And that we couldn't be as attracted to careers that don't pay well as white people are?" She didn't come out and say the survey respondents were racists, but the frustration and anger in her words implied it.

Since the survey had been anonymous, my friend had no idea that I had been one of those white people who had answered the survey question based on implicitly racist assumptions. Being young, shy, and needing to maintain a positive working relationship with my friend, I took the cowardly way out: I didn't tell her how I had answered the question, or ask her in more detail why she thought the answer was a problem.

Feminist issues were always of deep concern to me. But it wasn't until years later—after I had gone to graduate school, was hired as an adjunct at a local college, and was doing a lot of reading in preparation for teaching a first-year college writing seminar—that issues of race and racial justice came to the fore for me. The college's writing class, you see, was meant not just to teach writing, and not just to teach about a specific subject of the adjunct's choice (in my case, children and childhood), but also to teach about gender, class, and race. 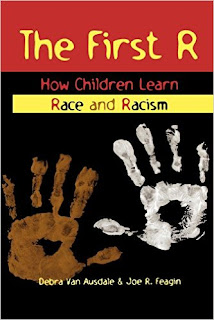 Perfectionist that I am, I wanted to do a good job teaching this class. I'd learned, and felt prepared to teach, about writing, about childhood and children's literature, and about feminism. I even felt somewhat prepared to teach about social class. But I didn't feel at all prepared to teach about race. So I read all I could find on the issue as it related to education and childhood: Peggy McIntosh's seminal essay "White Privilege: Unpacking the Invisible Knapsack"; Beverly Daniel Tatum's Why Are All the Black Kids Sitting Together in the Cafeteria?; Janet Helms' "Towards a Model of White Racial Identity Development" and William Cross's "Theories of Black Racial Identity Development"; Debra van Ausdale's The First R: How Children Learn Race and Racism. And many, many more books and articles devoted to race and racial injustice, and how to teach about both. And I attended workshops for the teachers of the first-year course, several of which focused on issues of race. And I enrolled in a summer workshop on Race and Culture at Boston College. I wrote and published an article about issues of race in the Harry Potter books. I learned the difference between individual, personal racism and institutional/structural racism ("I don't want to work for your publishing company because you don't pay anyone enough" vs. "I can't work for your publishing company, because that company systematically discriminates against blacks").

So I could probably claim that I'm better versed in issues of race and racial injustice than are many, many white people in America.

And still, I screw it up. I say, and write, racist things. Not intentionally, and not all the time; not as often as I might have if I'd never read, and been taught, and taught myself some important, painful things about race and racism in this country. But because as a white person growing up in the second half of twentieth century America, I grew up in a racist society, and absorbed many of its racist assumptions without ever being consciously aware of it. It's a struggle, engaging in an ongoing practice of self-examination to recognize, never mind root out one's own racial, and often racist, assumptions. And it can be messy, painful, and embarrassing, especially when some of that self-examination takes place in public. Such as on a blog about romance novels. 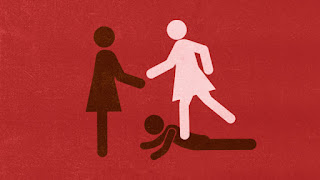 I've screwed up on this blog, written things that offended romance writers and readers of color. And smart, brave people have called me on it. The first time it happened, in response to a post I wrote complaining about the lack of racial consciousness in romances with black heroines and white heroes, my urge was to deny it, to fight back, which I did by challenging my critic in the comments. Another time, an upsurge in traffic to my blog from the blog of an author of color led me back to her blog, where I discovered that she had been deeply offended by two lines in my review of her most recent book. I wanted to shout: I didn't mean to hurt you! I'm not a racist! Or if I am, it wasn't intentional! And look, you misread what I wrote! But I'm sorry!

In the end, I didn't respond to this author at all, but for far different reasons than I had kept quiet about my responses to that publishing company diversity survey. My intent in writing this particular review had been positive, but the impact of reading the review for the author had been decidedly negative. And one thing that has stuck with me from my training in race issues is that intention isn't the only thing that matters; impact matters just as much. Many white people have good intentions, but internalized or institutionalized racism often shadows their actions, even actions driven by the best of intentions. It was, and is, not that other writer's responsibility to make me feel better that my well-intentioned post had impacted her so negatively.

To be called out for racist statements when you're struggling to be a white ally in the anti-racist cause sucks. It's all too tempting to justify ourselves, or to protest, "I'm on your side! Why don't you criticize the obvious racists, rather than me, a person who is sympathetic to your cause?" It's also tempting to just give it all up, to stop engaging, to say "Well, it's not my problem; I'm white."

Don't give in to that temptation. Because it sucks much, much more to be a victim of racism than it does to be accused of it.