“Passing is a deception that enables a person to adopt certain roles or identities from which he would be barred by prevailing social standards in the absence of his misleading conduct. The classic racial passer in the United States has been the “white Negro”: the individual whose physical appearance allows him to present himself as “white” but whose “black” lineage  (typically only a very partial black lineage) makes him a Negro according to dominant racial rules." —Randall Kennedy, "Racial Passing"**

Racial passing, that is, a person with black ancestry "pretending" to be white, was a common theme in myriad American novels in the period from 1880 to 1925, by both black and white authors. The very concept of passing relies on a rule not found in any other country besides the United States, suggests literary critic Juda Bennet*: the "one drop rule," which argues that having no more than one-drop of "Negro" blood makes a person a "Negro." Black and white exist as absolute opposites, an essentialist binary in which white = power and black = lack of power. The one-drop rule protected white society against the challenge people who had both black and white ancestry presented to the strict "you are either white, or you are black" binary. To acknowledge people who had both black and white ancestry as something other than either black or white would be to challenge the absoluteness of the binary, a binary whites used to justify their oppressive treatment of blacks. The idea of biracial identity did not exist in post-Emancipation America, Bennet argues, and did not come into widespread use until long into the 20th century.

I could not help but think about Jada Bennet's analysis of earlier passing narratives as I read two recently released novels with biracial characters. Especially about one of the most common tropes that Bennet found in this body of literature: the death, by novel's end, of the protagonist who passes. Such characters (primarily women, deemed "tragic mulattoes") raised disturbing questions about just how permeable the strict lines between black and white actually were. If a person with "black" blood could pass as white, what did it actually mean, then, to be white? To be black? If some black people could look white on the outside, might they be no different from white people on the inside? Bringing up such possibilities through the creation of characters who pass proved incredibly disturbing; by killing off characters who pass, Bennet argues, such narratives evade, at least temporarily, these disturbing questions.

Both Beverly Jenkins' historical romance Forbidden and Shannon Gibney's YA contemporary, See No Color, reimagine the traditional passing narrative. Jenkins' novel, set in 1870 Denver, features a male, rather than a female, protagonist who passes. Rhine Fontaine grew up on his father's Georgia plantation. But he enjoyed few of the privileges of being the son of the owner, for his mother was not Fontaine's white wife, but an enslaved black woman. Rhine first realized that his light skin and green eyes signaled "white" to others when he was ten; though he was supposed to be acting as his white brother Andrew's slave servant, he and Andrew sat down together and ate in restaurant for whites. Though their father whipped them both for their transgression, neither forgot the experience, and after the war, Rhine left for the west, "headed to his own future; one he planned to live out as White" (Kindle Loc 73).

After five years in Virginia City, Nevada, Rhine has carved out a prosperous, respectable life. He owns his own saloon; he's on the city council; and he's engaged to marry the white daughter of a fellow councilor. Unlike the protagonists of many an older passing narrative, he does not distance himself "his" race: he opens his saloon to black and white alike (although whites won't come, since there are blacks there); he advocates politically on behalf of rights for the town's Coloured population; and he lends money and invests in business in the black community. Nor is he psychologically traumatized by his passing. To himself, he acknowledges that "By passing, he'd gained a lot in terms of wealth and prestige, but he'd lost a lot as well" (1128), but his examples of loss—having to listen to racist jokes, and to be looked at oddly when he protests against them, and not being able to attend all-black celebrations and social functions—do not torment him.

It's only after he rescues young cook Eddy Carmichael from a con artist in the desert, and finds himself unexpectedly attracted to the beautiful black woman, does Rhine consider telling others beside his brother and his best friend about his biracial background. Jenkins doesn't dwell on Rhine's decision; in fact, it is first mentioned only in passing (no pun intended) during a conversation he has with Eddy about honesty: "He thought about the lie he'd been living though he'd be changing that soon" (2975). And though Eddy worries after she hears the truth that if Rhine tells others that his former white friends and colleagues will "undoubtedly denounce him and maybe even threaten his life," no actual violence occurs. Rhine even takes pains to secure his future financially, so that his white debtors cannot default by claiming that a white man cannot owe money to a black one. Thus, Rhine's passing does not result in tragedy and death; Jenkins rewrites the passing narrative, constructing the rejection of passing as a gift of romantic love.

See No Color, Shannon Gibney's contemporary YA, considers a very different kind of passing: the passing a child of color is often forced to do after being adopted by a white family. What's most important to sixteen-year-old Alex Kirtridge is not the color of her skin, but her determination to follow in her father's footsteps and succeed as a baseball player. So it's more than a bit of a shock when her younger white sister, who's always been a bit of an oddball, brings up the subject of race in the middle of a cozy family dinner:

"What do you all make of Alex being the only black person in our family? I mean, I've been thinking about it, and I know I'm not the only one. Sometimes I see people staring at us int he grocery store like they can't figure us out, and I feel weird, and I know it must be like ten times weirder for Alex. But it's like this secret, you know? Like no one is supposed to actually admit that she's black, or maybe more that she's not white. But it's impossible because she's just right there with us and its like 'How can't you see this?'" (29)

Alex isn't stupid. She knows about the history of racial discrimination professional baseball players in America had to face. And she knows that the few black girls in her Wisconsin high school taunt her for being uppity, for thinking she's white when she's not. But it's only after Reggie, a black player on an opposing baseball team, asks her out, and shows her an African American culture far different than the one she imbibed via the media and her white family, that Alex really starts to think about what it means to be biracial. What it means to "be the only black person" in an all-white family.

Alex's family has not encouraged her to think about her blackness. And when she begins to think about it despite their hopes that she'll ignore it, they actively discourage her. Brother Jason, a year younger than Alex, tells her, "Alex, this isn't about anyone feeling better. It's about reality. I've never seen you as black and neither has Mom or Dad or Kit, okay?" (72) And her father sits her down for a special heart-to-heart: "I just want you to know that your mother and I, we will always see you as just you, as Alex. There's nothing black—or particularly . . . racial—about you to us because you're our little girl and always will be" (58). 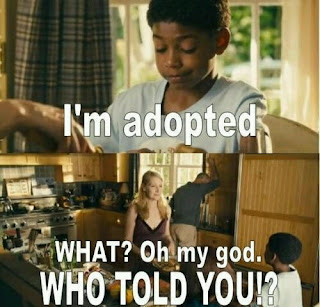 But Alex is starting to see the assumptions that lie behind her parents and her brother's "unseeing": "Something about the way he said 'black' made me cringe a little. Like it was the worst thing a person could be. I remembered his tone when he used the word "mixed" to describe me, however, and in contrast, it was almost prideful" (58). Asking Alex to "see no color" is to ask her to agree to the tacit assumption that being white is normal, being black is inferior. Alex's parents are asking Alex to "pass" so they will not have to confront their own deeply denied racism. And to ignore their racism is to ignore the deep shame Alex herself often feels at not being "black enough," at so often feeling like an outsider to the black culture of which so many people assume she's a part.

Discovering that the people you love are asking you to collude in their own racism is a disturbing wake-up call. But it is one that many transracial adoptees face, Gibney's novel asserts. In large part because many white families continue to "see no color."

Many students and adults I've talked with about race over the years argue, like Alex's father, that they "see no color" when they look at other people. Those who say this say it with pride, believing that it shows how unprejudiced they are. But Gibney's novel suggests that despite the positive intentions behind such refusals to differentiate people by the color of their skin, "seeing no color" is ultimately a refusal to recognize the very real ways that racism, particularly racism against people of African ancestry in the United States, continues to negatively impact their lives. 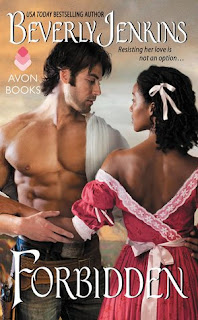 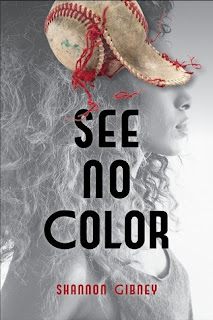