Bread for all, and Roses, too: Courtney Milan's HER EVERY WISH

Our days shall not be sweated from birth until life closes,
Hearts starve as well as bodies, give us bread but give us roses.

As we come marching, marching, un-numbered women dead
Go crying through our singing their ancient call for bread,
Small art and love and beauty their trudging spirits knew
Yes, it is bread we fight for, but we fight for roses, too.


As I was reading Courtney Milan's latest novella, I could not help but think of the Lawrence, Massachusetts "Bread and Roses" strike of 1912. In response to a new Massachusetts law limiting the number of hours women and children could work (from 54 to a mere 52!), textile mill owners in Lawrence cut the wages of their workforce. Expecting such a move, leaders in the Industrial Workers of the World union organized a strike of primarily female immigrant millworkers, workers whom several other unions claimed could not be organized.  The strikers demanded not that their wage be returned to its former level, but that it be raised by 15%. Because working women deserved not only the lowest wage that would allow their survival, but a wage that would allow them "small art and love and beauty," too.

Milan's novella is set hundreds of miles away from Lawrence, in London, England. And it takes place 46 years earlier than Lawrence's Bread and Roses strike, in 1866. Yet its heroine, Daisy Whitlaw, has the same thirst for the small beauties of life as did Lawrence's textile workers. Daisy (whom readers of book 1 in the "Worth Saga," Once Upon a Marquess, will remember as the working class best friend of that book's heroine), a woman who cannot stop reaching for her dreams, no matter how many times her hands are slapped away, opens the story by entering a contest offering fifty pounds to the person who presents the best plan for a new business. Ten semifinalists have been selected based on their written proposals (wise Daisy entered under the name "D. Whitlaw"), and now each must give a public presentation to the members of the parish. Unlike the other finalists (all men), whose proposals include the same old ideas for new stores and businesses, Daisy's proposal is a novel one: Daisy's Emporium, "a small shop of carefully selected goods. Durable, beautiful, and inexpensive. Designed for—" For women, Daisy had planned to say. But the hostility of the crowd, angered that a woman has dared enter the contest, makes it almost impossible for her to deliver her intended speech (Kindle Loc 121). 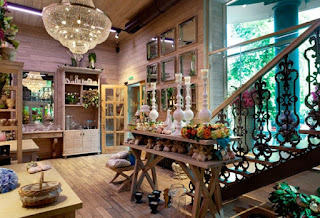 In spite of the difficulties of her presentation, Daisy is chosen as one of the five finalists invited to prepare a more detailed proposal. The man in charge of the program suggests that her invitation has little to do with her proposal's merit, however:

"We'll see you all next Saturday. And it looks like we have our entertainment in order. After all, we've just lined up the jester." He gave Daisy an exaggerated waggle of his eyebrows and let out a great, braying laugh, one that explained precisely why she'd been chosen. (163).

Daisy, though, can't help but hope that her proposal might have a slim chance of winning, even in the face of such sexist condescension. And so when Crash, her former lover, an impudent, self-confident flirt of a man whose ancestry is so mixed that people who barely know him feel entitled to come up and ask him, "What are you?" offers to serve as audience while she rehearses her speech—"You need to practice in front of someone you hate. Someone who makes your stomach curdle. Someone who will ask questions while you want to smash his face in," (i.e., himself)—Daisy finds herself accepting.

And finds herself not practicing her speech, but being thrust upon a velocipede, learning self-confidence by learning to ride this newfangled wheeled contraption. And learning a lot more about Crash in the process, a man with whom she had once thought herself in love. A man so arrogant and self-assured that she'd thought nothing could wound him—especially not herself.

Not just bread, but roses, too. 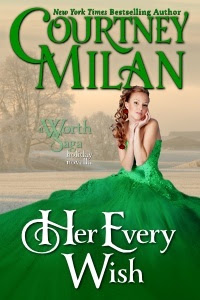 Courtney Milan
Her Every Wish
The Worth Saga, #1.5
self-published
Posted by Jackie C. Horne at 9:00 AM