The romance community tends to agree that a romance is not really a romance if it doesn't end happily, or at least end "happily for now." How, then, can a subgenre of romance have a trope that's all about the unhappy ending?

As blogger Danielle on The Radical Notion blog argues in "The Curse of the Tragic Lesbian Ending," the majority of lesbian romance films conclude with decidedly un-HEA moments:

If you identify as queer, you're lucky if you've got a handful of decent films to choose from, and even luckier if one or two of those films don't end with the protagonist dying, going to jail, or ending up alone. I can't tell you how many lesbian romances I've watched that have ended with one of the female characters meeting some awful fate.

The situation in young adult books with lesbian characters isn't quite so bad, at least in the books I've read. But still, the HEA, or even a HFN ending, is far from the norm.

The premise behind Maley's novel is both high-concept and potentially cringe-worthy. On her way home from school in small-town Georgia, Katie Hammontree interrupts a football player bullying a fellow classmate, Jake, for being gay. Jake ends up with a split lip as a result of the encounter, and Katie invites Jake into her house to help clean him up. And invites her bestie, Sarah Cooper, over to help, since Sarah intends to go to nursing school after graduation next year. Jake, mistaking Katie and Sarah for girlfriends because of their playful physical closeness, invites them to come to a meeting of an unnamed school club to which he belongs: "if you guys ever wanted more people to hang out with and talk to and stuff... or if you just wanted to hang out with me and talk, you could come. You know, if you felt like spending time with people who can relate to you" (21). The girls, friendly but oblivious, accept. But when they find out from Jake just before stepping into the meeting that the club is a support group for gay students, impulsive Sarah decides to go with it. Dragging a reluctant Katie behind her, Sarah announces to the other students "Katie and I have been dating for about two months now, and we're ready to tell the world" (43).

Sarah's justification for her impetuous declaration is that it's a great way to get the guy she's been crushing on to notice her. "Guys like lesbians, right? And they also like challenges" (46). And because she and Katie are far more popular than the rest of the queer kids at school, "we'll be majorly boosting the confidence of the kids in that LGBT club" (46). Katie, worried about humiliating Jake and about being accused of making fun of the rest of the club, reluctantly decides to go along with Sarah's deception.

After Sarah and Katie out themselves to the wider school community, they learn a lot about what the queer kids in their school have to face every day. Word was that lesbians have it easy, especially compared to queer boys; homosexual boys get physically bullied, but everyone likes a lesbian, right? In fact, the straight boys like a lesbian a little too much: "Hey, Katie. Heard about you and Sarah... so what's that like and where do I buy tickets?"

Colton was the first of many, many guys that day who felt the need to gawk at us, tell us we were hot, announce their approval, or all three. We got questions about threesomes, questions about what we did in bed—all of which were completely invasive and inappropriate and absolutely qualified as "rude"—and questions about which one of us was the man in our relationship. We were whistled at, catcalled at, stared at, and shouted after, and I got called a "dyke" twice in casual conversation.  (57) 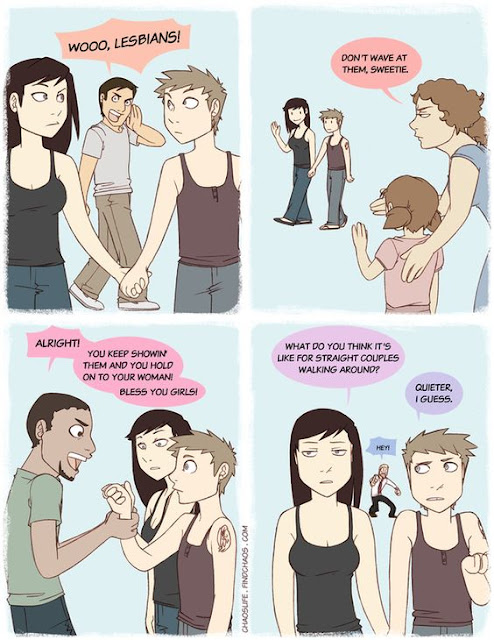 And that doesn't even mention the sexually harassing text and email messages that start arriving on both girls' phones. And the difficult conversation Katie has to have with her ex-boyfriend, with whom she broke up a few months earlier, appeasing his fears that he "turned her" gay. And the need to prove to a doubting fellow LAMBDA member that she and Sarah really are dating by kissing Sarah in the middle of a meeting.

That latter one is really the kicker for Katie, because "kissing Sarah just once had felt better than all of the hundreds of times I'd kissed Austin combined" (98). Might she really be gay? "What if my perfect boyfriend was actually a girlfriend? And how on earth was I supposed to know if that was the case?" (137)

Even worse, if Katie is gay, is she destined to be like one of the heroines of the lesbian romances that Sarah has been reading and watching for "research," a loser who falls in love with her straight best friend only to be doomed to rejection? As Sarah describes the pattern,


In  "From Problem to Pride," Blogger Daisy Porter suggests that there are three types of YA books with queer characters:

• The gay problem novel, in which a queer character comes to terms with their own sexuality, the sexuality of a relative, or deals with coming out of the closet
• The "gaytopia" novel, in which being queer is not a problem
• The "Big Gay Book," in which queerness is the focus, but in a celebratory, rather than problematic way

Porter's first category includes many lesbian protagonists. But the "gay" in the "gaytopia" and "Big Gay Book" categories is telling; girls who love girls still rarely feature in novels in which being a lesbian is not a problem, or in which lesbianism is celebrated.

While I can't say that I love the idea of holding up characters who, in Katie's words "manipulate and use a minority group for their own gain" (76) as heroines (Katie and Sarah get off pretty lightly when they finally admit their ruse), I can definitely get behind more lesbian YA romances with HEAs. Or even HFNs. 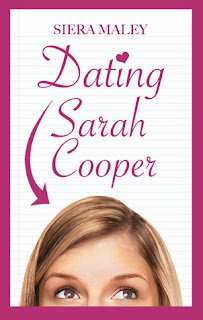