In the Author's Note at the end of her historical romance An Extraordinary Union, Alyssa Cole explains why she never expected to write any kind of historical romance, especially not a romance set during the Civil War:

When I first became serious about my writing, I decided that, although I loved reading historical romance, I'd best stay away from it. It would lead to too many feelings to untangle, too much unfairness to wrap up with a happy ending, given the kind of heroes and heroines I enjoy writing. (Kindle Loc 3677)

What led Cole to change her mind? Learning more about the history of African Americans, especially those "I'd never been taught [about] in the classroom—beyond the simplified stories of George Washington Carver loving peanuts and Rosa Parks being tired" (3677). Reading about the histories of real African Americans of the past, Cole discovered not only people who were active participants in the fight against slavery; she discovered a deep desire to share their stories with romance readers, many of whom had likely grown up with the same gaps in their knowledge of the past as she had. By "extending the tropes of the Civil War [romance] beyond 'brother fighting brother' and 'swooning southern belle,' " Cole found herself able to explore the histories of people those familiar tropes typically erase: those of a "darker hue."

The heroine of An Extraordinary Union is not a swooning southern belle, but a woman who gives every appearance of being a dutiful slave: Ellen Burns, a mute black woman enslaved by the white Caffrey family, whose patriarch serves as a senator in the recently-formed Confederate government. But readers know from the start that Elle is far more than she appears: an intrepid, sharp-tongued spy who uses her eidetic memory and her devotion to justice to ferret out secrets that will help the Union cause.

Born into slavery, Elle and her parents were freed by their white master after he inherited them from his father. So, too, was Mary Bowser, the African-American Union spy upon whom Elle is based. But unlike Bowser, who, after being manumitted, remained in the south working as a paid servant in the Richmond, Virginia household in which she was born, Elle and her family moved north to Massachusetts after gaining their freedom. Bowser became a spy as part of the network founded by her white employer, Elizabeth Van Lew, but Elle is part of a mysterious "Loyal League" run by a man named LaValle, a man whose race is not specified (at least not in this first book of the series). But Cole's story makes it clear that there are other blacks involved in the Loyal League's work. These small changes—far less improbable or jarring than most of the historical anachronisms found in many a historical romance—bring Elle closer to the "kind of heroine" Cole "enjoys writing": a resourceful, empowered, decisive woman who chooses to act in the face of oppression. 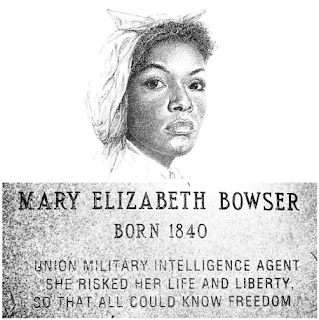 The real-life Mary Bowser married a free black man just days before the start of the Civil War. But Cole chooses a completely different fellow to be Elle's partner in spying and in romance: a charming white Scot detective/spy, Malcolm McCall (based on the real life Pinkerton detective/spy Timothy Webster). McCall, sent to Richmond to ferret out whatever secrets he can, ingratiates himself with the Caffreys by putting forth a convincing performance as an aggrieved southern racist, and by wooing the selfish daughter of the house—"all's fair in love and secession," as Malcolm cheerfully tells himself. But it is really Elle to whom Malcolm finds himself drawn.

Though on the surface, Elle and Malcolm seem to have little in common, both have seen firsthand how tyranny can warp both the oppressed and the oppressor. Even so, Elle is more than reluctant to act on her own attraction to the engaging Malcolm. Dallying at all, and especially with a white man, will only distract her from her true purpose. But as the two share rumors and information, they also discuss the frustrations and fears their work, and the state of their country, engender, conversations that bring them emotionally closer. In perhaps their rawest exchange, issues of white guilt and black anger come to the fore, in a conversation that could as easily be held in 2017 as in 1861:


He'd always prided himself as a friend and ally to every man who sought equality, but was that true? Or had he imagined himself a savior instead?
He shook his head, disgusted with himself. With everything. When he spoke again, his voice was a raw whisper in the silence. "You deserve to be outraged. All of your people do. Why you didn't set this country ablaze a hundred years ago is beyond me."
Elle jumped to her feet, not very much taller than him even though he knelt and she stood. When she spoke, her fury was constrained in a voice that fairly dripped with annoyance at having to explain something very obvious to him. "Because, unlike you, we don't have the luxury of being outraged. If we rebelled and set half the country on fire, where would that leave us? You think that would make folks see us as more human?
"Given the way they treat their slaves, maybe it would," he muttered darkly. "Maybe the only way for this country to be cleansed of its sins is to burn them away."
"What, an eye for an eye?" she scoffed. " 'If I cannot inspire love, I will cause fear?' What rubbish." She fixed him with a look that made him regret that the words had even crossed his mind, let alone left his mouth. "The blood of my people permeates the very foundation of this country. Even if everything from the Eastern seaboard to the furthest territory out West was razed to the ground, it couldn't make up for the injustice. And if you think that's what I'm fighting for, what every Negro putting their life on the line to stop the Confederacy is fighting for, then you've misunderstood everything. You've misunderstood me. . . . you can keep your outrage. All I can do is try to make a difference."  (1275-90)


Cole's novel is not without its flaws. The spy storyline tips into melodrama towards the final pages, when Elle and Malcolm uncover a Confederate plan to break the Union blockade of Richmond and rush to escape their suddenly suspicious enemies. And the requirement that a historical romance supply a certain number of sex scenes makes Elle and Malcolm's physical relationship happen a little too quickly to be quite convincing given the dangers of their positions and the importance of their work. But such flaws are minor in the face of the hopeful possibility that An Extraordinary Union just might open the minds of readers spoon-fed the falsities of "Rosa Parks was tired" and "George Washington Carver loved peanuts" to a far more complicated reality: that African Americans of the past can and did take active, and successful, roles in the fight against slavery and oppression. 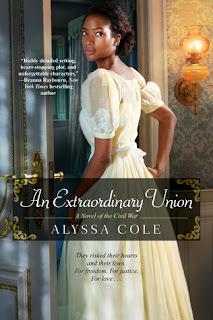 Alyssa Cole
An Extraordinary Union
A Novel of the Civil War
Kensington, 2017
Posted by Jackie C. Horne at 9:00 AM