Playing with the Crush-on-your-older-brother's-best-friend Trope: Karen Stivali's TONIGHT and Tamsen Parker's IN HER COURT

As a kid, I longed for an older brother, a kind but tough guy who could look out for a shy younger sister, magically convince the mean kids to stop teasing her standoff-ish, bookish self. As an adolescent, I continued to long for said brother, although for slightly different reasons—an older brother might tell me what boys said to each other behind closed doors, give me the inside scoop about which ones were as rude and obnoxious and girl-hating in private as so many of them seemed to be in public. Alas, my mom and dad, parents to three females, never saw the need to adopt a fourth, boy or girl.

Perhaps my old longing is why I'm often drawn to the romance trope of the younger woman who has a childhood crush on the unattainable best friend of her older brother. A "true" big brother is always looking out for his younger siblings' best interests, especially those of his younger sisters, right? And since big brother is a nice guy, you know that big brother's best friend must be equally worthy—otherwise they'd never be besties. Despite the Westermarck effect theory (that people who grow up together during the first few years of their lives aren't commonly sexually attracted to one another as teens or adults), teen girls longing for boys with whom their brothers have been long-time friends are a staple of YA, New Adult, and contemporary adult romances. Yet in many such romances, the older brother can seem less like a friendly protector and more like a cockblocking tool of patriarchy. So many older brothers don't want to acknowledge younger sis's right to being a sexual being; they say they are only protecting sis from undesirable men, but their actions are all about keeping little sis pure (or at least being allowed to pretend that their sisters are not getting it on to the same degree that they are). So I've though I'm drawn to the trope, I often end up setting crush-on-older-brother's-best-friend books aside, dismayed by their implicit, or sometimes even overt, sexism.

That's why I was intrigued last week when I read two older-brother's-best-friend books back to back, romances that play with the trope by changing the gender and/or the sexuality in the younger sibling triad. The opening lines in Karen Stivali's short novella Tonight, the prequel to her Moments in Time series, tells us both that we're in trope-tastic land, but that here the trope is just a little different than the expected:

"He's not gay, you know."
If I had a dollar for every time my older brother Derek reminded me that his best friend, Wiley, wasn't gay, I'd be able to afford my own place instead of sharing an apartment with the two of them. (Kindle Loc 94). David has been crushing on older brother Derek's best friend, James Wiley, since Derek first brought his rugby teammate home to hang out when David was sixteen. But Derek, well aware of his geeky arty younger brother's sexual preferences, doesn't want Davey to break his heart, and so breaks into his protective mantra whenever baby bro starts to get that certain look on his face. Once David left for college and started dating, Derek's warnings stopped. But now that Wiley's grad student roommate has kicked him out of his apartment for a reason Wiley is reluctant to explain, and the brothers/roommates have invited him to crash on their sofa until he can find another place, Derek's mantra is back in full force.

David doesn't have trouble getting a date, nor has his brother stood in his way of David's hooking up; he's not the cockblocking patriarchal big brother of more conventional, heterosexual older-best-friend crush romances. And though he's a jock, Derek has never disdained his "dorky, artsy little brother," a brother who had "never even been able to sustain the illusion of being straight." But Wiley's presence in their small apartment puts a definite damper on David's dating prospects, if not his libido, because though he's always wanted a boyfriend, he's still crushing pretty hard on Wiley.

But when the models for David's junior year portfolio keep not showing up, and Wiley offers his services in their stead, older brother's cautionary words go right out the window. Especially when David begins to suspect that said cautions may say more about the secrets Wiley has been hiding from Derek than about how well Derek knows his own best friend. A lovely wish-fulfillment fantasy romance from an author I'll definitely be looking to read more from. 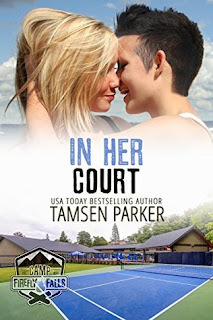 Tamsen Parker's* latest, In Her Court, a novella in the group-authored Camp Firefly Falls series, features a most unusual best-friend pair: a heterosexual guy and a lesbian girl. Nate Carter and Evangeline "Van" Thompson have been friends since they were kids, both risk-takers with a flair for engineering. And since the third grade, Nate's younger sister Willa has been crushing onVan ("Maybe it was when Van had fixed the elevator in her Barbie Dream House or when she'd rescued Willa's favorite My Little Pony from being used as BB gun target practice" [91]). Nate and Van were supposed to be spending the summer working together at Camp Firefly Falls, a fun summer camp for adults, Nate as the resident tennis instructor, Van recuperating from her first year as a tenure track engineering professor serving as the camp's IT girl. But when Nate breaks his leg during a waterskiing accident mid-season, he calls on little sis Willa, who's been at loose ends since her own summertime grad student research project fell through at the last minute, to fill in for him.

Sharing a cabin with sexy, smart Van ("Van had a certain sense of style—half mad-scientist, half-Diane Keaton circa Annie Hall.... Add in her crazy-brilliant brain that worked in ways Willa would never understand and her quirky sense of humor, and Willa was a goner" [108]) will definitely not be a problem for Willa. But will it be for Van?

It certainly seems so, especially when a prickly Van spends their first week co-habitating avoiding Willa like the plague. Is it because Van thinks Willa is still just a kid, even though she's now twenty-three? Or that she's only a dumb jock? Doesn't she get that Willa's in grad school? That she's studying geology, and not just in a "rocks for jocks" kind of way, but because she's intellectually jazzed by it? Or is it because she's so caught up in her worries that the job she's worked for her entire life isn't making her as happy as she had imagined that she won't give Willa the time of day? Especially since Willa hopes to follow Van into academia, albeit in a different scientific field.

When the camp director asks the two young women to pair together to plan an '80's theme week at the camp, complete with Star Wars costume party, Dirty Dancing dances, and Ghostbusters laser tag (with laser tag packs engineered, of course, by intrepid Van), the two are forced into a proximity far closer than Van would like. She's not about to endanger her longest-lasting friendship by entertaining sexy thoughts about his little sister. Or is she?

Although Van knows that "Nate wasn't the kind of big brother who would lose his shit about his little sister being a sexual being," she isn't "sure if that would extend to his bestie being the person his sister was having the sexy times with." And she's more than a little worried about losing her best friend, one of the only friends she's managed to hold onto: "She'd always been Nate's friend, and she could see how her becoming. . . intimate with Willa would feel like she was betraying that" (1162). Maybe if this thing with Willa is just "going to be a casual sexing thing, Nate wouldn't even have to know. At all. Ever." (1162). I love that Parker addresses this underlying fear, one that often remains unspoken or unexplored in stories where the three points of the relationship triangle are older brother, older male best friend, and younger sister, perhaps in part because of fears of homosocial desire when male friendships are at risk.

Though Parker's novella is filled with nostalgia, it's nostalgia for a time period (the 80's) and its beloved popular narratives, rather than its more restrictive gender roles. Both Van and Willa's voices are engaging and laugh-out-loud funny ("And then their fling would end amicably and things could go back to the way they were, just with more orgasms than she'd previously had. She shook it off, because she was going to carpe the fuck out of this diem and out of Willa as well" [1544]). I only wish the book had been longer, so that Willa and Van's sexy times could have been balanced by more "growing closer emotionally" scenes. But it's so great to see a popular series finally welcome a lesbian story into its ranks that I can easily forgive this one small shortcoming.


What other romances have you read that rock the boat of the standard crushing-on-older-brother's-best-friend trope?


* Full disclosure: Parker is a fellow chapter-mate of mine in the New England Chapter of RWA, and we serve together on its board. She did offer me an ARC, but no favors or foodstuffs were exchanged during the writing of this review.