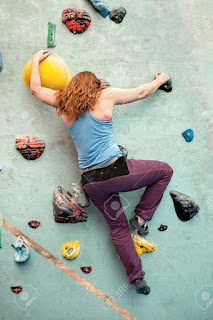 Readers of My Guys will remember Derek as the unassuming bi-racial (Norwegian father, Asian mother) rock-climber who was drawn into an affair with an older woman, a woman who was already sleeping with his friend. At the start of Mine, Derek is once again unattached, but is nursing a crush on tall, muscular, white, assertive redhead Amanda, who has recently moved to the area and has become a fixture at Derek's rock-climbing gym. After noticing how turned on Derek gets after she orders him to tie her climbing shoe, Amanda invites herself over to Derek's for dinner. But Amanda's expectations for some fun BDSM times go awry when Derek greets her demand that he kneel in front of her with a innocently humorous "Neil who?"

Amanda's been clear about her own sexual preferences since her teens:

There'd been a girl, a worshipful, adoring girl, who'd followed her from class to class, jumping to fill her every need. One day Amanda had looked at this girl and thought, If she was a guy, I'd fuck her, and her sexuality had clicked into place with a single, solid thunk. (Kindle Loc 356)

And Amanda has also "lived in her own body long enough to know that the media overestimated the uniformity and blandness of the American male's taste. They weren't all looking for women who were fragile or stupid, not even most of them" (319). But even as an experienced Dom, she doesn't quite know what to do with Derek, who appears to enjoy being submissive, but who also doesn't seem to have a clue that being a submissive might be an sexual proclivity, rather than just a response to a particular woman to whom he is attracted. And Derek, nice guy that he is, isn't after a one-night stand; he's longing for someone to call him "Mine" for the long term. Amanda may be experienced when it comes to kink, but not when it comes to romance. She hasn't ever had a romantic relationship, and isn't sure she wants to start one, especially with a guy who is far more comfortable identifying as "submissive to you" rather than "submissive" full stop.

But as Amanda spends more time with Derek at the gym, she's increasingly drawn to the "sweet-faced, pretty-mannered, submissive boy" (579). Which to her mind is a major problem: "The problem was... that she liked Derek. The problem was that she did want to be what Derek wanted. And that was definitely a problem. Because she didn't think she could be what Derek wanted and who she was all at the same time" (839). Amanda assumes that Derek wants a vanilla girl—a bossy vanilla girl, yes, but a vanilla girl all the same.

"He's only doing it because you want him to."
"Yeah, duh. That's the game, Lissie. That's how we play it." She looked around for Derek.
"It's not a game to him, Amanda. He's crazy about you, obsessed. He'd do any fucked-up thinking you asked him to, but that doesn't mean he wants to. I see how he looks at you. If you care about him, you won't take advantage of him this way." (2066)

If Derek is only agreeing to submit to her to please here, is it submission at all, Amanda wonders. "What did yes mean if he wasn't capable of telling her no?" (2396). Even if he promises "I won't ever let you do something to me I'll hate you for," can she trust him to tell her when she needs to stop? 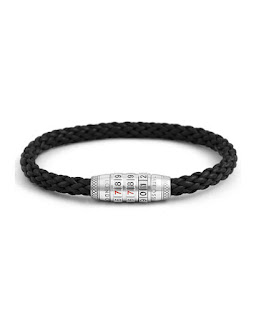 There's so much to enjoy in this funny, heartfelt romance: Amanda's brusque self-confidence, and her frustrations with the lingering male privilege of even the most submissive of men; Derek's growing realization about, and acceptance of, his own sexual likes and dislikes ("He'd never wanted to own up to who he was, and so he'd settled for women who were bossy rather than dominating" [2611]); a scene in which Amanda teaches a younger girl how to physically stand up to her pushy older brother at the climbing gym; another when Amanda brings Derek home with her to her "normal" family for Thanksgiving; and the hilarious discussion between Amanda and Derek's mom when she realizes that the small Asian woman may be even kinkier than she is ("Although, you know, your Mom and I were talking about voluntary restraints, and it got me thinking..." [3087]).

And especially the way that Amanda finally figures out how to be sure that Derek's devotion to her is given with full consent, rather than coerced from him by her. A way deliciously reminiscent of the the black moments of many a classic romance.

Another romance for the feminist keeper shelf. 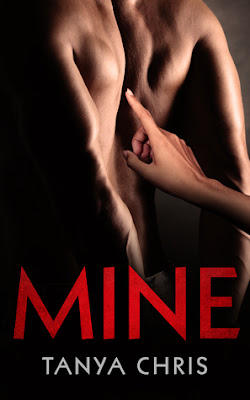