Whenever I get too depressed about the state of political discourse in America, I start fantasizing. Not about sexy alpha men, but about moving to a different country, one more socially and politically progressive than the one in which I live now. Especially one where sexism is far less prevalent than it is in the good old U. S. of A.

To, say, Canada. Or perhaps one of the Nordic countries, which, according to the 2017 Global Gender Gap report (published by the World Economic Forum) score in the top 10 of countries that have come the closest to closing the gender gap (as measured by Economic Participation and Opportunity, Educational Attainment, Health and Survival, and Political Empowerment):

So I was thrilled when an RNFF reader sent me an email recommending a romance novel by Simona Ahrnstedt, a best-selling author in her native Sweden whose books have recently begun to be translated into English and published in the States. What would a romance that took place in a country with far more gender equality look like?

Turns out, there's still a lot of room for sexism in that 19% gap in the opportunities and achievements between women and men in Sweden. Especially in the age of gender-based cyber harassment.

Reporter Ambra Vinter's career has been on the downslide for the past few years, ever since Aftonbladet, the popular news tabloid where she works, has hired a new editor-in-chief with whom Ambra doesn't click at all (maybe because she told him the paper had taken a step back when it came to feminism, perhaps?). The constant flood of hate mail her woman-focused articles often inspire is another downside of the job:

Twenty emails in ten minutes. Nineteen of the messages were hate mail on an article she'd written about sexual harassment at a gym, published the day before. She scrolled through them and knew that she should forward the worst to the security department, but she didn't have the energy. She had been working for too long now to care about anonymous misogyny. (7) 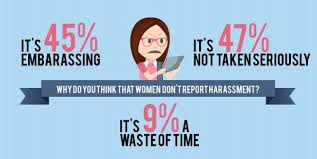 But Ambra's always wanted to work for Aftonblat, and doesn't want to risk losing her job. So she agrees to agrees to travel north to Kiruna, even though the small town is where she lives for a year as a foster child with an abusive family. Interviewing a tipster about a possible long-ago sex scandal might be worth the trip, especially if she can get the story and get back to Stockholm without running into any unpleasant memories.

But it's not just elderly Elsa and her stories of the secret sex retreat she and her lover ran during the 1960s that end up fascinating Ambra; it's a grumpy fellow in the hotel coffee shop, Tom Lexington, who has his own hidden reasons for coming to Kiruna: to try and convince his long-time girlfriend, who moved on after he was declared dead after a security job in Africa went terribly wrong, that she really should come back to him.

But Tom isn't the same easy, competent guy who left an already dissatisfied Ellinor to immerse himself in his high-risk overseas security work. Four months being held by terrorists have left him a shell of his former self. He can't eat; he can't function at his job as CEO of Lodestar, a private security firm; and he certainly can't avoid the panic attacks that overtake him without warning, turning him into a weak failure rather than the in-charge professional he's used to being. And he can't bear to medicate or talk his trauma away, far preferring to dull his fears in the numbing warmth of liquor. When Ambra gets stranded in Kiruna on the eve of Christmas, the two spend a surprisingly companionable holiday evening drinking together in the hotel bar. But when Ambra offers Tom a one-night stand, he ends up turning her down. Largely because he's convinced himself that "If he could just get Ellinor back, everything would be fine. He was sure of it" (30).

Readers are far less sure, and so aren't surprised when fate keeps throwing Ambra and Tom together. Even while Tom is up front with Ambra about his desire to reunite with his reluctant ex, he and Ambra find themselves drawn to one another, recognizing on some intuitive level that they're struggling in their different ways to deal with the very different traumas they've experienced. Tom gradually begins to emerge from his trauma-induced depression, with the help of an old friend, a new dog, and a woman whose directness is the exact opposite of his former girlfriend's tiptoeing around difficult subjects. A woman who makes him feel like "a normal man," not "a weakened freak or a violence machine, just a person" (277). But Ambra's only in Kiruna for a short time, and Tom's still too invested in the idea of being saved by Ellinor to leave.


There's not one, but two scenes in the book in which Tom ends up physically rescuing intrepid Ambra (although her endangerment in one of them was inadvertently caused by Tom). There's also a (male? female?) wish-fulfillment subplot in which Tom and his ex-military friend Mattias search out all the misogynists who have been cyberstalking Ambra and her foster sister Jill, a famous pop singer, and use their secret agent skills to scare the bullies into stopping and even apologizing. None of this comes across as all that empowering for Ambra (although thumbs up for the idea of making men be responsible for dealing with anti-feminist members of their own gender). But even despite these drawbacks, Ambra is not portrayed as a damsel in distress, but as a powerful, outspoken woman who takes it for granted that she and everyone else who shares her gender have just as much right to a seat at the power table as does any man. One of my favorite moments is this bit between Ambra and her (male) nemesis at the paper, entitled, arrogant Oliver, who once used a "I'm protecting you, vulnerable woman" manipulation to steal a story from Ambra:

"Half my team's sick, but we have Oliver doing a series on murders of women out jogging. The unprovoked woman killer."
"What does that mean? That some killings of women are provoked?" Ambra couldn't stop herself from asking. "And why say woman killer? You would never say man killer."
Oliver groaned. "It's a good headline. Don't start with that crap again."
"We'll take another look at the headline," Grace [their boss] said firmly.
"Of course," Oliver said smoothly, but he exchanged a sardonic glance with his direct manager. (323). 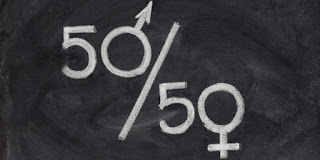 Ambra's great at sticking up for women in the workplace. But the trauma she experienced, losing her parents as a child, being moved from foster home to foster home, and suffering an abusive placement, have her deeply confused about how to make personal connections, especially ones across the lines of gender. Another favorite scene is one in which Ambra tries to puzzle out with Elsa, the nonagenarian former sex retreat counselor, just what it is that men are looking for from a woman:

"Men fall for a certain kind of woman, I think," Ambra continued. Elsa was almost one hundred. She had to know things.       But Elsa slowly shook her head. "Men aren't a uniform species. They fall for different types, just like we do."
"What do you think men want, then? Really?"
Elsa gave her a slight smile. "I lived most of my life with a woman, so I may not be an expert on the subject. But I don't think you can generalize like that. Men are different. Just like women . . . . There are plenty of crazy men out there, so there must also be plenty of crazy women for them."
Ambra smiled. "That doesn't sound much like solidarity."
"You shouldn't feel solidarity with someone just because they're the same gender. And stupidity has nothing to do with gender, it's everywhere."
"So why do you think some women find it so easy to meet someone?" she asked, which was what she really wanted to know, after all.
"I think, honestly, that a lot of them simply settle." (135-37).


It's no surprise, then, that Ambra refuses to settle, especially when Tom appears to choose a suddenly nostalgic Ellinor over her at an important social event. A man with a hero complex, a man who needs to rescue the damsel in distress in order to make himself feel whole—that's not the man for Ambra.

But can Tom redefine for himself what it means to be a hero? A man who doesn't just act, but who also feels?

After reading High Risk, I can understand why Ahrnstedt's been dubbed "The Scandinavian Queen of Romance." I'm really looking forward to reading more of her work. 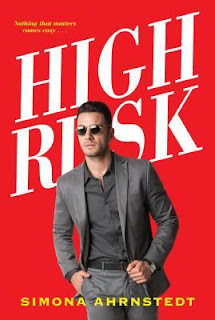