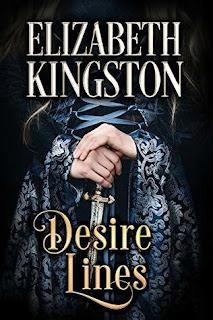 After being in somewhat of a historical romance reading funk for the first few months of 2019, I was thrilled to see that several of my favorite historical romance writers had new books coming out in the spring. Here are my short recs for books by three RNFF favorites: 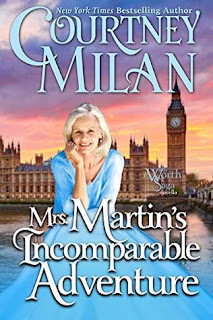 Courtney Milan's full-length historicals feature traditional male/female romance pairings. But her shorter works tends to star more unconventional couples. The duo in her latest, Mrs. Martin's Incomparable Adventure, might just win the award for most underrepresented characters in Victorian romance. Although they are both white, both of her lovers are female, as well as "seasoned"—one in her sixties, the other in her seventies. Though the eponymous Mrs. Martin suffers from a lack of spirits after the death of her best friend, she hasn't lost any of her outspoken manner ("My husband, God rot his soul, used to bring prostitutes home all the time. After he'd finished with them, I'd serve them tea and double whatever he was paying them.... It was hard work fucking my husband. Trust me, I should know. I certainly didn't want to do it" [Kindle Loc 225]). She's certainly not the meek, retiring gentlewoman recently sacked boarding house manager Miss Violetta Beauchamps was hoping for, a woman whom Violetta could somehow swindle into paying the far-overdue rent for her smarmy nephew. Violetta desperately needs that money in lieu of the pension her employer had promised her, but then chose not to pay her upon unfairly firing her after she'd worked for him for forty-seven years. In fact, Violetta is far closer to the meek mouse she had hoped Mrs. Martin would be than is the formidable Mrs. Martin herself.

But after Violetta shares the truth of her nephew's boorish behavior with his aunt, Bertrice Martin decides to set off on the adventure her doctor prescribed: not for a rest in Bath, but to London with Violetta, to help the unfortunate woman drive out the sponging "Terrible Nephew" from what she mistakenly assumes is Violetta's boarding house. Milan's trademark humor is in fine form here, as is her penchant for pushing her characters into a seemingly inescapable corners then inviting us to watch with unabashed glee as they use unconventional methods to escape the confines society wishes them to inhabit. Violetta's transformation, from traditionally "nice" woman who is happy to fade into the background to one who speaks out on her own behalf as well as Mrs. Martin's, is particularly delicious. 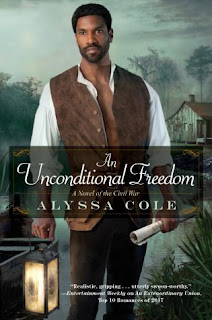 An Unconditional Freedom, the third entry in Alyssa Cole's American Civil War-set series The Loyal League, features a man as disillusioned as is Milan's Violetta, but far less happy to accept his fate with any meekness or humility. Before the war, Daniel Cumberland's greatest trauma was that the woman he loved (the heroine of book 1, An Extraordinary Union) did not love him back. But after the idealistic aspiring lawyer is kidnapped from his Massachusetts town and sold south into slavery, his happy, carefree nature is quickly beaten out of him. We meet Daniel after he is rescued from enslavement, unable to fit back into his old life, to "be strong and forget what happened," as his father recommends. Instead, he's working as a spy for the Loyal League, a spy who prefers to work alone. But when Janeta Sanchez, a new recruit, enters the league, the angry, disdainful Daniel is assigned to be her partner.

Janeta, the daughter of a Cuban planation owner and the black slave woman he later married, has grown up taking slavery for granted, even while recognizing that her golden brown skin makes others treat her not quite the same as they do her obviously Spanish half-sisters. Moving from Cuba to Florida changed little for her—until war broke out, and her father was arrested on suspicion of being a northern sympathizer. Her lover in the Rebel army promises that if she will spy on the Yanquis, he'll make certain her father is freed. And thus Janeta, the daughter of a slave owner, finds her way to the Loyal League, using her skill at hiding behind layers of pleasing behavior to ingratiate herself with all of its members. All, that is, but the wary Daniel.

Cole choice to decenter the whiteness that typically looms so large in northerner vs. southerner Civil War stories is not only a boon for readers of color looking for greater representation of their experiences in historical romance; it also allows white readers to step away their fears of being associated with the villain in the more typical white/black binary portrayal of slavery. Which may allow them to read without debilitating defensiveness about the blind spots that many whose heritage does not include a history of enslavement and racism often have towards those whose does, as well as the ways that good people are indoctrinated into accepting what we today often self-righteously believe we would never accept ourselves. Take this exchange between after Daniel and Janeta, after Daniel reveals the scars on his back:

Janeta thought of the time her family had gone into the city center in Santiago. Her mother had clapped her hand over Janeta's eyes when they'd walked by a man tied to a post with his bloody back exposed.
You don't need to see such things. You are a Sanchez. You don't have to endure such ugliness.
She couldn't look away now, though. Daniel has bared to her this proof of his ill treatment and all she could ask herself was, "Why?"
"That man tried to start an insurrection. They had to make an example of him."
That's what her father had told her later when she'd questioned him about what she had seen. He'd handed her a gift when she'd asked why insurrection was bad, a beautiful porcelain doll with creamy skin, rouged cheeks, and blue eyes, and she'd let the matter drop.
"What did you do?" she asked Daniel, and saw the muscles beneath the scars tense.
"You think I did something to bring this upon myself?" he asked, his voice taut, and Janeta's fear came to the surface then. Not that he would hurt her, but that she'd made yet another misstep.
"No! I—I meant, why did they do this to you?"
He shook his head and pulled his shirt back up over his shoulder, not turning to face her as he did up his buttons.
"I was born a Negro in a country where that is a crime, and I was ignorant enough not to know that I had already been convicted."(Kindle Loc 556)

Both Daniel and Janeta discover their own blind spots as they work together to track Jefferson Davis—and struggle to reconcile the plans of the Loyal League with their own secret goals.

After Elizabeth Kingston's call for "Reclaiming Historical Romance" in the December 2018 issue of RWA's Romance Writers' Report, I was interested to see how she herself would address the problem of white supremacy in her own medieval historical romance writing (you can get a copy of her article free via her online store). The third book in her Welsh Blades series, Desire Lines, features two white protagonists, one an aristocratic the other a servant. But neither protagonist is typical of their class, a major theme of the story. The book also includes a secondary character who is dark-skinned, and a brief subplot depicts a Jewish family persecuted by the English. Such characters, while they do not play major roles, go a long way towards disrupting the "white mythos" of the more traditional medieval historical romance.

Gryff and Nan first meet on the road to Lincoln, when the bandits who have been holding Gryff captive attack the group of travelers of which Nan is a part. It is the servant, Nan, though, not the nobleman Gryff who does the rescuing, letting fly with her deadly knives until all of the robbers are dead. Gryff, fearful for his life from more than just the bandits, doesn't tell his rescuer or any of her fellow travelers his true identity, and neither does the narrative, although brief flashbacks hint at his less than lowly upbringing. Nan, though a servant, has benefitted from the favor of several noblewomen, favor that has not only taught her how to wield a knife, but also to speak Welsh as well as a noblewoman would. During their long journey across England—Nan looking for a long-lost sister, Gryff for his best friend, after which both then travel to Wales—the two exist in a liminal space, outside of traditional societal norms and expectations. Which allows each to see beyond the surface of the other, and of course to fall in love with that person. But when their journey comes to an abrupt end, that liminal space ends, too, and each must decide whether their feelings for one another can survive in a world that expects something far different of a nobleman than it does of a servant. An old-fashioned historical in the best sense—not because it has an all-white cast, but because it glories in real angst, high stakes, and a bucketload of both physical and emotional longing, with personal feelings set against seemingly insurmountable demands of honor and duty.

Not to mention the falcons and hawks...
Posted by Jackie C. Horne at 9:00 AM