Romance novels are often regarded as fantasies, stories that tell about love not as it is, but as we wish it would be. In the world of young adult fiction, though, with its strong tradition of literary realism, love stories often feature a far more rocky road to the HEA (Happily Ever After) than do many other sub-genres of romance, if they arrive there at all. If an author can provide a wealth of laughter to help cushion a reader's ride on said rocky road, he or she is likely to find an eager audience. And if on top of that, a writer in our so-called "post-feminist" age adds a healthy dollop of feminist consciousness-raising to her tale, then she just might find herself a featured author on Romance Novels for Feminists. As does E. Lockhart, author of four feminist books about wisecracking neurotic adolescent Ruby Oliver and her travails through the pitfalls and pleasures of teen romance.

Lockhart's quartet, beginning with 2005's The Boyfriend List: 15 Guys, 11 Shrink Appointments, 4 Ceramic Frogs and Me, Ruby Oliver and concluding with Real Live Boyfriends: Yes, Boyfriends, Plural. If My Life Weren't Complicated, I Wouldn't be Ruby Oliver (2010), is chock-a-block full of "of course this is the way it is" feminism, as well as recognition of the ways in which feminism's goals are still, frustratingly, out of reach.

Each reader will have her/his favorite feminist moments. In the spirit of Ruby, who loves to make lists, I've jotted a few of mine below.

1. Ruby's lists of romance patterns from movies and books that hardly ever occur in real life:

Another thing that happens in the movies: They all have these dramatic crises where everything looks bleak and you think the couple will never, ever get back together. But then they realize they can't live without each other, and in the end they live happily ever after. (BL 65)

I thought maybe heartbreak would make me lose my appetite, like it always does to heroines of books, and then I could waste away tragically to nothing and Jackson would see me and I'd be pale and haunted-looking, and he'd realize that he never should have hurt me like that. But no. It turned out my stomach has no idea of what's going on in my heart and I could eat just like normal, if only there was normal food in my house). (BL 151)

Movies where the heroine meets a guy who is funny and cute and kisses her—but then she never lays eyes on him again: none. (BB 146)

If you're trying to talk to a boy in front of his friends, don't mention anything too girly. Like mermaids. Or kittens. If you do, he is apt to act like a complete wanker and cause severe injury to your self-esteem. Beware.

And after she and her friend Meghan get a boy to recruit others to bake for their bake sale:

"This is going to change the whole social order at Tate," I said to Meghan as we left the B&O in the rain.
"It'll get us out of this state of Noboyfriend, if that's what you mean," she answered, unlocking the doors and climbing into the Jeep.
"No, I mean it'll change the antiquated sex roles that go on during bake sales," I said.
"Speak English."
"You know. Every year, girls bake. Boys eat. It's like the nineteenth century."
"I guess."
"That's why I never liked CHuBS [the bake sale club] that much in the first place. It was all girls in the kitchen. In fact, I bet you no boy has contributed to CHuBS, ever. And like Wallace said in American H and P last year, if you change one part of the pattern in a social system, the rest will have to shift in accordance." (TMofB 83)


3. In this book, it's the jerks who sling anti-feminist comments, not the heroes:

"Ooh," I said, all innocent. "Can I see? Let me look!"
"I don't know," said Darcy.
"Please," I coaxed, scotting in next to him and leaning over flirtatiously. "Just for a sec. I love pictures."
He pulled them into a stack and handed them over. As soon as I got them, I yanked the Nora pictures [ones featuring her friend topless] from the bottom of the pile, dropped the others on the floor and ripped the ones of Nora into tiny pieces.
"Oliver!" barked Darcy. "What'd you go and do that for?"
"You have to ask?"
"Don't go all feminist on me," he muttered. "Geez."
"I wouldn't need to be feminist if you weren't such a pig." (BB 82)


4. And especially, the way Ruby points to how difficult it is to reconcile what we know (from what feminism has taught us), what we even believe, with how we feel: 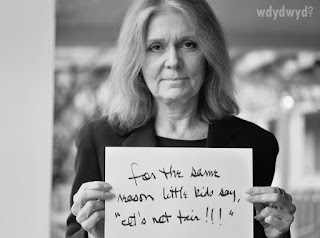 The second mentally deranged thing about the situation was that I was waiting for someone to ask me. Obviously, this is the twenty-first century, and as I'd told Nora, girls can ask guys out. We should ask them out. There is no reason to sit around being passive and hoping to that someone will ask you to a dance when you can easily invite the person you want to go with. How are women going to become president and win Oscars for directing if we sit on our butts waiting for things to happen?
I know this. I believe it. But I still wanted someone to ask me to the dance. Yes, like it was 1952. Yes, like Gloria Steinem never existed. Yes, idiotically, yes. (TMofB 188)


What I'd like to spend the bulk of this post on, though, is a feminist message that may not be so obvious on a first reading of Lockhart's series: the message that girls play as much a role in the suppression of other girls as does "the patriarchy."

In the opening book of the series, Ruby has recently been dumped by her boyfriend of six months, Jackson Clarke. Three days after dumping her, Jackson begins dating Ruby's best friend since kindergarten, Kim. Because she is so invested in being the nice girl demanded by contemporary femininity, Kim begs Ruby, "Don't be mad" before she drops the news of her new romance on Ruby. Though unbeknownst to Ruby, Jackson has been talking to Kim for a long time about his troubles with her, Kim has kept to the letter of the "Rules for Dating in a Small School" their quartet of friends has worked out and written down in their self-authored The Boy Book: A Study of Habits and Behaviors, Plus Techniques for Taming Them:

Rule 4: Never, ever kiss someone else's official boyfriend.
Rule 5: If your friend already said she likes a boy, don't you go liking him too. She's got dibs.
Rule 6: That is—unless you're certain it is 'truly meant to be.' Because if it's meant to be, it's meant to be, and who are we to stand in the way of true love, just because Tate is so stupidly small? (BB 16)

Kim invokes rule 6: "I'd never do this to you, except the thing with you was never working out anyway—and I think Jackson and me are meant to be" (BL 131), and continues to beg "Please don't be mad." Kim can thus position herself as acting "nice," as following the rules, while suppressing the knowledge that her behavior is hurting Ruby.

But when Kim can't attend the big upcoming Spring Fling dance, Jackson asks Ruby to go with him—"as friends." Ruby decides to say yes, realizing only later that she didn't consider how it would affect Kim, or Angelo, the son of her mother's friend whom her mother had fixed her up with to go to the dance: she was "only thinking about how Jackson still had some feelings for me, would love me again in my silver dress, and how we would stand in the moonlight, looking over the railing at the light playing across the dark water" (BL 156). Yes, even though she can see the false romance patterns movies put forth, she still finds herself sucked in by them, as well as by her lingering feelings for Jackson.

But standing is not all Ruby gets up to with Jackson in the moonlight. And though Jackson is more than a willing participant in their Spring Fling smooch, somehow he comes out without a scratch. The resulting spin is that Ruby is the slut, the boyfriend stealer, the friend-betrayer. Jackson is the "faithful saint who was only doing a favor taking a poor, rejected four-eyed ex to the dance when she had no other date" (BL 168). 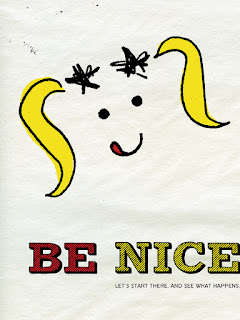 Ruby becomes a metaphorical leper in the Tate universe; she loses not only Kim, but also her other two best friends, both of whom take Kim's side. Ruby even agrees, at first, with Kim's interpretation, and begins experiencing panic attacks. Only after several months of therapy can she acknowledge her own anger at Kim, and admit that "I just didn't think she had been nice at all, really" (BL 153).

Very few books for teenagers demonstrate so clearly the damage that socializing girls to be "nice" can cause, not just to themselves, but to other young women. Getting along with one another at all costs, even at the cost of deluding themselves when they act in a way that isn't nice at all, becomes a defensive skill for girls raised under patriarchy's dictates. Learning to recognize when a girl, (your friend, or even more difficult, you, yourself) is hiding behind the "oh, I didn't intend to hurt you, please don't be mad at me" line to protect herself from knowing how much pain she has brought to others is a truly difficult skill. But a vital one in a society in which girls are supposed to hide their anger and jealousy behind a facade of niceness.

For Ruby, it takes three more books' worth of therapy, losing and gaining new friends, and figuring out just what she wants from a boyfriend before she truly gets it. Only then can she see which boy in the Tate universe might be generous enough to recognize, as she has, that "people are complicated and make mistakes" (TMofB 231). And that when they make mistakes, and hurt you, you shouldn't hide behind niceness; you need to tell them that you're mad. And then, if you love them, you also need to forgive.

With Ruby's help, it just might not take readers quite so long...

The Boy Book: A Study of Habits and Behaviors, Plus Techniques for Taming Them (Delacorte, 2006)


Next time on RNFF: Free to be a Feminist