Early in the third volume of Meljean Brook's steampunk Iron Seas series, Riveted, readers learn that the novel's heroine, Annika, hails from a hidden all-female society. And when, soon after, we find out that its hero, David, is a vulcanologist, traveling with two other scientists intent on exploring the very area where Annika's people live, we have all the makings for a familiar science fiction trope: the exploration of gender roles through the depiction of a single-sex society. 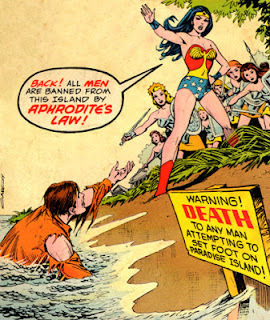 From Greek myths of the Amazons to Wonder Woman and her home of origin on Paradise Island, stories of all-female societies being "discovered" by men have allowed writers to interrogate the gender norms of their times, or to imagine other ways gender might be constructed in imagined fantasy settings. Male authors have often depicted such societies as threatening or wanting in some way, but feminist writers typically take a more hopeful view, imagining what women might create when freed from the constrictions of patriarchy. While some authors banish men altogether from their female utopias, others imagine how a new type of society might be created when men interact with women raised with far different assumptions about gender roles than they have been.  Charlotte Perkins Gilman's 1915 utopian novel, Herland, a staple of early women's studies classes during the 1970s and 80s, is a classic example of such gender-role exploration and re-visioning.

Yet as Riveted progresses, Annika and David's story proves not to be a meditation on gender roles, for Brook takes for granted the equality of the sexes that Gilman and feminists in the 1960s and 70s could only imagine. Instead, Brook uses the trope of the hidden single-sex society to meditate on heroism as it relates to sexuality. In particular, through Annika and David's developing romantic heterosexual relationship, Brook explores how heterosexuals might become allies to those with different sexual orientations.

First, a bit of plot: Annika Fridasdottor, a woolgathering dreamer back home in Iceland, has spent the last four years out in the wide world, working as an engineer on an airship while she searches for her missing sister. Källa, several years older than Annika, was always the brave one, the warrior, the leader. Only after her sister has disappeared does Annika discover that the elders of Hannasvik have banished Källa after she took the blame for a thoughtless action of Annika's, one that might have led to the discovery of their hidden society. And their culture has an imperative reason to remain hidden; not only did the founders of Hannasvik escape slavery by killing all their male captors, including a royal prince, but now many of their citizens live in single-sex romantic relationships, relationships which those from New World societies would condemn not only as unnatural, but so abhorrent as to warrant death. 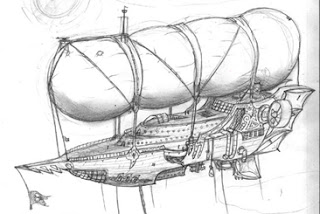 Far from adventurous, Annika would far prefer to be working with fabric, designing and sewing beautiful clothing, than spending her days stoking an airship's engine, hoping against hope that Källa will answer one of the hundreds of personal ads she's taken out in every newspaper in every city where the cargo ship stops. At the novel's start, when a guard in the New World city of Navarra stops her, her panic is palpable. She's never been known for her courage, and fears that in the unstable country of Castile, no stranger would dare to help another.

Yet a stranger does step in. But not only out of the goodness of heart. For twenty years, David Kentewess has been trying to fulfill a promise made to his dying mother, a promise to find her people and return to them the runes she wore around her neck. But during her life, David's mother had been remarkably cagey about just where she came from, and David has had few clues to help him in his search until he hears Annika's voice, speaking with an accent he'd only heard once before, from his mother's lips. Thus, he intervenes with the guard, knowing that he'll gain the chance to talk with her after his technologically-enhanced arm, legs, and eye frighten the man away. Haven't they frightened almost everyone in the New World away, including any woman in whom David has ever taken an interest?

As a passenger on Annika's airship, David tries everything to convince her to reveal what he knows about his mother's people; Annika, already scarred by thoughtlessly risking the lives of everyone in her village, does nothing but refuse. Even the obvious and growing attraction between herself and this gentle outsider cannot persuade Annika to betray her trust, and the two decide to separate. 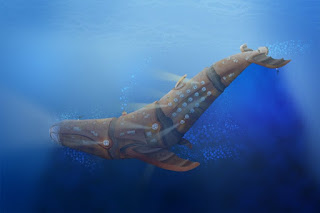 But the inventiveness of Brook's steampunk plot—a submersible whale, disappearing airships, a son bent on recuperating his scientist-father's lost reputation—continue to throw the two together, despite their agreement to part ways as friends. Yet the question of whether or not Annika should reveal Hannavik's whereabouts to David proves far less pressing than the question of how one finds the bravery to stand up for one's allies. And, perhaps more importantly, how to know when one should stand up, and when standing up is too dangerous a risk. David tells Annika she's brave to trust him with the why of Hannavik, if not the where. Annika replies that it is easy to die to protect someone you love:

"For someone, it's easy. For something, though... I think it's harder to die for something you believe in. To stand up and to say that something else is wrong. I said it to my friend, but would I shout it abroad this ship? I don't know. I'd be too afraid of what would happen to me, because so many people think as she does. I hate myself for this."
"When you're surrounded by stupidity, self-preservation isn't a sin."
"Refusing to challenge that stupidity and letting it continue might end up hurting someone you love, later. I'd die to protect them, but not to tell people that I've kissed a woman, too?" (180) 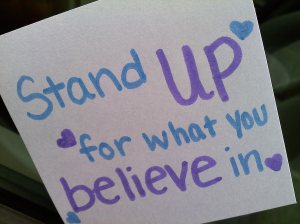 Through his growing love for her, David helps Annika negotiate this very difficult question, when to speak up, when to hold back.  David doesn't ask Annika to be less for his sake; instead, he recognizes what is already in her, and urges it to blossom. He shows her the self that he sees: not the scared, inattentive, unadventurous girl forced by guilt to leave Hannasvik, but the brave, loyal, risk-taking woman who speaks her mind, calls others on their shortcomings, and will do anything to protect the people she loves.

And David, too, must learn to see himself as an ally, rather than an outsider, if he and Annika are to have any sort of future together. For as Iceland becomes ever-more populated, that future must include helping the women of Hannasvik gradually come out of isolation.  Källa left Hannasvik not only because she wished to help her sister, but because she believed that her people could not continue to hide the existence of Hannasvik from the ever-increasing populace of Iceland. After her own adventures, Annika agrees, and works to persuade her mothers of the same. "We can start small, here," Annika tells them. "And never back down."

No longer a rabbit, hiding at the first sign of danger, Annika will pick her battles, as well as when to conduct them. Annika can become a positive ally to her mothers' lesbian society even as she recognizes that she can no longer be a part of it now that she chooses to make a life with David. She can be that ally not only because of her love for her mothers, but also because her heterosexual love for David, and his for her, gives them both the courage to embrace hope, rather than be led by fear.


Hats off to Ms. Brooks, not only for showing us that not all feminists have to be kick-ass actions heroes, but for writing a sweet, touching romance, as well. 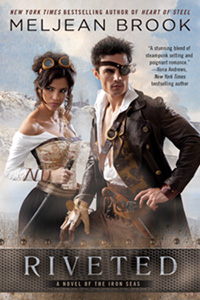 
Next time on RNFF:
Enjoy your after-Thanksgiving Friday!
And look for another RNFF review on the 27th
Posted by Jackie C. Horne at 9:00 AM