Feminism in the Military: M. L. Buchman's I OWN THE DAWN and WAIT UNTIL DARK

For her final project in 8th grade history last spring, my daughter wrote an essay about the role of women in the military during World War II. My girl always grimaces whenever I start analyzing the stereotypes in pop music during car rides, or on the Disney Channel shows she currently likes to watch, so I was quite surprised when I heard the topic she had chosen. And as she asked me to proofread her paper, I got to learn all about the WAVES and the WACS, the WASPS and the SPARS, and the different jobs these women played when they were allowed for the first time to serve in the U.S. military in an official capacity. Though about 70% of women were employed in "feminine," primarily clerical, jobs, some took on more traditionally masculine roles: machine gunner; sniper; tank driver; scout. And I got to read all about the sexism and discrimination these brave pioneers faced: not only from individual men in the military, but also from the military's image of women in the service. Recruiting posters, flag-waving films, and the like depicted females who served their country as overtly feminine, even domestically-inclined, out of fear that if the public believed women would be "masculinized" by military service, a huge percentage of the work force necessary to wage war would be prevented from joining up. 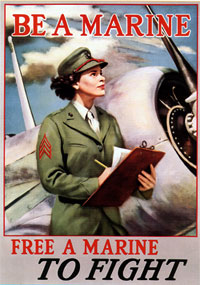 Sexism and discrimination rarely play a role in romance novels featuring heroes who serve in the military, and in particular those who serve in special or elite military forces. Alpha males willing to put their bodies on the line to defend their country (and, of course, their love interests); the heightened tension and emotions inherent in war- or battle-situations; the double shot of readerly pleasure available when patriotism and love become intertwined—these seem to be the characteristics that most appeal to readers of the military romance.

The military heroine is far less common than her country-serving counterpart. Perhaps this is due to writers' worries that a military man's heroism might somehow be undercut by the presence of an equally strong woman warrior. Or fears about a military woman's "masculinization." Or perhaps it simply reflects the U.S. military's 1994 Combat Exclusion Policy, which prevents women from being assigned to ground combat units.

But as former Army officer Steve Griffin points out, an administrative loophole that allows women to be "attached" if not "assigned" to combat units means that more than 230,000 American women have engaged in "combat situations" since 2001. This population of female soldiers, and the women who admire or wish to emulate them, seems a demographic ripe for romance authors to capture. 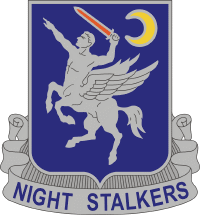 One writer set to take advantage of both the gap in military policy and the gap in romances with military heroines is M. L. Buchman, one of a growing handful of male writers who have begun to recognize the potential of the romance/suspense genre. His new series features the army's Special Operations Aviations Regiment (SOAR, gotta love those military acronyms!), nicknamed Nightstalkers, not a combat unit, but rather a support unit, an elite helicopter group designed to support general and special forces' operations. Thus, its members can (and do, in Buchman's depiction) include women as well as men.

But as the opening scenes of each of Buchman's novels makes clear, bullets shot and rockets launched don't care what label the army has slapped on a soldier; soldiers are wounded and die, whether members of official combat units or support. Whether male or female.

Featuring women in military roles primarily occupied by men in romance novels would be a feminist move in itself. But Buchman's books move far beyond token feminism, not only by featuring different constructions of military masculinity, but also by depicting heroines admirable for, and loved because of, their intelligence, their strength, and their desire to prove themselves the best of the best at what they do.

Archibald Jeffrey Stevenson III, a helicopter co-pilot, and Staff Sergeant John Wallace, a mechanic, are "all business" when they're in the air on a mission. But unlike their commanding officer, Mark Henderson, neither of them embody the  alpha hero character common in much military romance. Archie's a typical beta: co-pilot, happy to be second-in-command to Commander Emily Beale; tall and lean, more of a runner than a bruiser; and not at all easy around women, despite his economically-privileged upbringing. "Big John" has the body of a warrior (or an offensive lineman), but on the ground, he's the fun-loving, cheer-you-up type, "always the first with a story, a smile, a laugh." Neither is aggressive, controlling, or needs to dominate the world or his fellow unit members. Rather than drawing upon the same vision of alpha military masculinity for the heroes of his books, changing only each hero's name and job description, Buchman suggests instead that there are multiple types of men who can embody heroic masculinity: shy men and happy men; burly men and lanky ones; men content to allow a woman, or a man, to lead.

One thing that all Buchman heroes do have in common, however, is a respect for the skills and strengths of their fellow female soldiers. Neither Archie nor John needs to save, rescue, or otherwise lord it over the women with whom they serve. And especially not over the women they come to love. As John describes the new addition to his helicopter team, "Meeting Connie Davis, you wanted to dismiss her as some cute Connie Homemaker. The girl next door brought to life right out of the television screen. But he'd run into the wrong end of her very keen mechanic's mind more than once."

Neither Connie nor tough-as-the-streets sharpshooter Kee Smith is a perfect, flat military Mary Sue. Each has her problems, and her weaknesses, weaknesses that striving to be the best of the best in the army had allowed each to mask. Both Archie and John learn to care for these women because of the vulnerabilities they reveal. But ultimately it is Kee and Connie's professionalism, their skills, and above all their strength that makes these women mean more to them than any other person has before. "You share [Emily Beale's] strength," John tells Connie. "A quiet power. It's mesmerizing." Connie's response—"I like being called powerful. I like the way it makes me feel"—suggests how being recognized for ones' strengths, rather than simply being protected from ones' weaknesses, can be a particularly compelling spur to love.

Buchman's novels spend little time depicting the difficulties women still experience in the army and other armed services. Perhaps because his novels are romances, rather than works of realism, and thus are not obliged to present a fully rounded depiction of the military? Or perhaps because he wishes to portray women as heroes, rather than in any way as victims? The one incident in Dark in which a subordinate acts in a sexist manner leads immediately to punishment—the male soldier is not allowed to advance to the next step in the SOAR training. It's an ideal, perhaps, Buchman's assertion that there is no room at the highest levels of the military for anything likely to weaken the team or its mission, as discrimination and sexism do, but an ideal worth dreaming of. 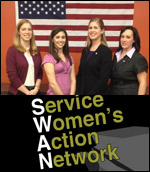 Having spent the last ten years of her life attending a Quaker school, my daughter seems unlikely to choose a career in the military. But if in some strange case of young adult rebellion or patriotic fervor, she heads off one day to a recruiter's office, it's good to know that she has a long history of women before her paving the way for gender equality: the WACS, WAVES, and other World War II servicewomen; the four military women who, with the Service Women's Action Network, recently filed a lawsuit against the Combat Exclusion Policy, arguing that since women have been serving de factor in combat since 1994, they should be granted the rights, privileges, and opportunities offered to the men who serve in fact; and the military women in romance novels such as M. L. Buchman's, women who are valued not for the way they fill out a uniform, but for the way their skills contribute to the work of the nation's defense.


Next time on RNFF:
Disney Princesses, Feminism, and Race