The power and limits of labels: Bill Konigsberg's OPENLY STRAIGHT

When I was in the tenth grade, my family moved from a small suburban Connecticut town to an even smaller city in Vermont. Such a move gave me the opportunity many teens long for—a chance to reinvent myself, unburdened by friends and classmates' prior assumptions about who I was or what I could be or do. In Connecticut, I'd always been labeled one of the "smart" kids; in our progressive, but tracked-by-ability school system, everyone knew which students had scored high on standardized tests, and which ones didn't (classes were numbered; those ending in 9 or 7 were for the bright kids, those ending in 1 or 3 for the not so academically-attuned). I took Orchestra, which meant I couldn't take Acting (the two classes were scheduled opposite each other). Our school was also too large for the uncoordinated and unskilled such as myself to participate in competitive sports. But when I moved to Vermont, I got the chance to strut my stuff on stage, to play Varsity basketball (I scored 2 points all season, but had a lot of fun in spite of my lack of production), and to experiment with other identities that my previous reputation as a brainiac had made it far more difficult to try on while I lived in Connecticut.

In the early 1980's, a do-over of my sexuality was not an experiment I considered. But it's precisely the possibility of such a do-over that draws Seamus Raphael Goldberg, the first-person narrator of the truly funny YA novel Openly Straight, to transfer for his junior year, from a liberal co-ed public Boulder high school to a small private all-boys Massachusetts prep school. Back in Colorado, Rafe leaves behind his ultra-liberal parents, his gal pal Claire Olivia, and, best of all, he thinks, his identity as openly gay. Out since eighth grade, Rafe is tired of being seen only as "gay," frustrated that other aspects of who he is get swallowed up by a label that only captures one part of his identity. He can't partake of the easy male camaraderie other boys take for granted; he's frustrated by the way his mom takes on queerness as her own personal cause (joining and becoming president of the local PFLAG chapter, bringing home stacks of books about homosexuality for him to read); he's angry that he always stands out, always has "different" metaphorically pasted across his back, a "kick-me" sign he's supposed to be proud of but instead just finds a deadening burden. 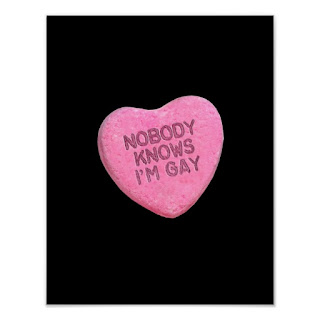 The above list may make Rafe sound like an ungrateful whiner, but Konigsburg's gifts as a writer create a narrator who is anything but. Between Rafe's narration of his present-day life at Natick and his creative writing assignments detailing "A History of Rafe," short pieces narrating events from his Boulder days that made him long for a less openly-gay public identity, Rafe comes alive as funny and thoughtful, confused and willfully ignorant, self-reflective and self-absorbed by turns, the perfect guide to this exploration about what really constitutes a person's sense of self.

After instituting his own "don't ask, don't tell" policy at Natick, Rafe gets to experience the thrill of being "mainstream," "acceptable," not automatically lumped in with the geeks and dorks and other clearly "different" kids as he was back in Colorado. The day he arrives, Rafe takes part in a pick-up football game and gets to experience the euphoria of group sports competition; later, he joins the soccer team and becomes part of the jock crowd; he even gets to sit with the "top of the food chain" at lunch, and enjoys cracking them up with his jokes. Not everything is about his sexuality, Rafe asserts:

...knowing a person is about more than knowing whom they fantasize about. That's the small stuff, actually. The big stuff is lying next to a guy on the floor and locking eyes and having deep conversations about philosophy. The big stuff is letting a friend know your hopes and your fears and not having to make a joke about it. That's what matters. (180-81)

Yet as the term progresses, Rafe finds himself drawn as much, if not more, toward the awkward and disaffected at Natick as toward the typical jock boys in the sporty crowd: his "ironic survivalist" roommate, Albie; Albie's openly gay best friend, Toby; and his fellow jock, quiet, kind, but guarded Ben. As Rafe's feelings for Ben grow beyond casual friendship, and Ben's for Rafe seem to, as well, Rafe becomes increasingly reluctant to face the truth that his sexuality may just be one of the "big things" about which a real friend has a right to know.

Teachers of my generation, those with a commitment to social justice, can often find the reluctance of younger students to acknowledge the racism, sexism, and heterosexism that still surrounds us frustrating, even bewildering. Reading Openly Straight helped me to understand a bit better where this reluctance stems from, and how my own attempts to counter it might just be compounding the problem. For example, after Rafe tells his parents about his sexuality: 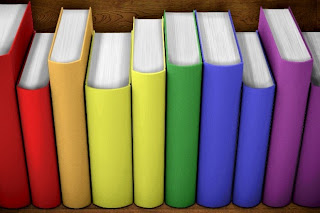 Suddenly there were six books I had to read about what it's like to be gay. I said to her, "Mom, can't I just be gay, and not read about it?" But she explained—and Dad backed her up—that we need to know history. Those who don't study history are doomed to repeat it, blah blah blah.

You know how you get the urge to clean your room, and it's no big deal? But when your mom tells you that you have to clean your room, you don't want to? That's me, anyway. So maybe if I had found all this stuff on my own, I would have really enjoyed learning about it. But instead, I got a pile of books from Mom, and now it was like I had gay homework from my mother. I was like, Thanks for making this exciting new thing a chore, Mom. Awesome.

I think I'll still be offering the books (including Openly Straight), Rafe's frustrations notwithstanding. But I will have a little more patience when my offer is met with a groan or a grimace, keeping in mind Rafe and the time and space he needed to come to terms with the more difficult, even painful, aspects of embracing and accepting a "different" identity. And perhaps, after reading Rafe's story, teen readers will cut us older ones a bit of slack when we jump on the "let's celebrate difference" bandwagon, calling embarrassing attention to aspects of their identities that they're still learning to wear with pride. 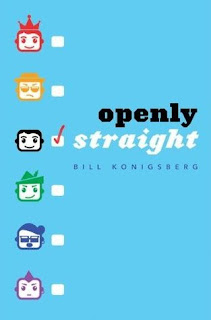