I've been searching for the source of the conventional wisdom that any historical romance with the word "Duke" in the title will sell better than one without. One Goodreads commenter points to a romance author as the originator of this truism: "I remember Julia Quinn once posted on her FB an advice for one of her author-friends, books with 'Duke' in the title sell better." If Quinn were truly the source, though, one would think that more than just two of her many romances (2000's The Duke and I, and 2008's The Lost Duke of Wyndham) would follow this dictum. 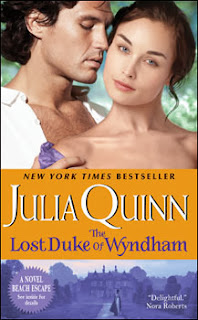 Author Shana Galen writes that it was her editor who told her "dukes sell." Galen concurs:"Women want to read about dukes. I'm a woman, and I want to read about dukes, too." An amazon.com reader echoes the idea that the truism comes from publishers in her story about her conversation with an unnamed author: "I was just talking to a writer when I bought her book at a signing a few months ago and jokingly said, 'Another Duke?" She looked tired as soon as I said it. 'Dukes sell. He was an earl, but my editor made me change him.'"

Editors urge their popular romance writers to endow every historical hero with the highest non-royal rank of the realm in order to increase their sales. Do said editors back up their assertions with actual sales figures, comparing duke books to non-duke books? Or do they simply rely on the wisdom of their Marketing and Sales colleagues? I'd be interested to see hard data from individual publishers, or individual authors, to see whether this claim is at all based on fact. Any historical romance authors out there willing to share their own experiences about the relative sales of their duke and non-duke books?

Whether or not duke books actually outsell their less lofty peers, the truism that they do means that duke books far outnumber their rivals in the marketplace. A quick scan of amazon.com using the search terms "romance" in the subject line and "duke" or other noble epithet in the title line gives us:

With a little over 31,000 books labeled "historical romance" at amazon, this means that about 1.7% of them use the word "duke" in their title. A small figure, perhaps, but one far larger than the actual number of dukes that existed during the Regency, the period during which many of these books are set.

Pardon me while I crunch a few numbers...

Obviously, then, the plethora of dukes in historical romance in no way reflects their actual numbers in real life. The more interesting question, then, perhaps, is not a mathematical one, but an ideological one. Just why do duke books sell better than other books? Or, even if in fact they don't, why do people think they do?

• they have power and money
• they have a title, which "makes us think of royalty, which conjures images of country houses, jewels, horse-drawn carriages and the like. It's romantic. It's sigh-worthy."
• they're romantically selective, a selectiveness which grants value to the heroine, and by proxy, to the reader: "They are sought after, and they can choose any woman they want, for the most part. It's sexy to think that a man who can have anyone wants you."

Some questions pop into my mind after reading the above list. First, regarding power and money: Do all women find men who have power and/or money sexy? For those who do, is it watching a man exercise power that is sexy? Or is the power more symbolic? Doesn't the exercise of power involve working, which, in this period, would take a man way from his lady love? Is it a fantasy of not having to think about money (as aristocrats were purportedly not supposed to have to do) that appeals? Do women who find men with power and/or money sexy also believe that the best, or only, way to get either is through a man? Do they not believe they can achieve either on their own?

Second, regarding the "dukes make us think of royalty" argument: This one seems in many ways at odds with the first one. Royalty is about power, or at least it used to be, but this list of images evokes luxury, beauty, and comfort, not politics, war, or any of power's other manifestations. Does this suggest that women are not really that interested in power, but more in the trappings of it? Another thought: why are country houses, jewels, and carriages "romantic"? Are things associated with the past, and/or with money, inherently romantic? Or are we simply transferring a Disney version of royalty onto our historical romance?

Finally, regarding selectivity: When dukes cease to become a scarce commodity, as they have become in the current historical romance marketplace, does the appeal of the selectivity Galen posits come into question? Or are readers willing to suspend their disbelief, as long as any one author does not populate her particular version of the period with too many dukes to maintain the air of selectivity?

Like Sandy at All About Romance, I have to admit my partiality for more realistic portrayals of the life of a duke, such as Mary Balogh's in 2004's Slightly Dangerous. Her Duke of Bedwyn is not freed, but rather is weighted down by, the heavy responsibilities of managing his dukedom's extensive properties and serving as the head of his often trouble-prone family.

But I must be in the minority, if it's true that books with "duke" in the title really do sell better than other historical romances...


What do you make of the current plethora of duke books in the marketplace? As a reader, do you find dukes more sexy than other aristocrats? Does seeing the word "duke" on the cover make you more likely to open your wallet?