At first glance, robbery and romance seem an unlikely couple. Robbery, at least of the high-stakes heist variety, is all head: planning, process, execution, and quick thinking when the inevitable wrench disrupts the scheme. Romance, in contrast, is all heart: instinct, chemistry, sensation and emotion. Yet reader/reviewer tension proves central to the appeal of both genres, whether in film, television, or novel form. Will our thieves outwit the guards and capture the jewel/statue/priceless painting? Will our hero win the girl? In a gifted writer's (or director's) hands, conflating these two very different types of tension can up the stakes to almost unbearably pleasurable levels. Is the hero really falling for our heroine? Or is his romancing only one more piece of an elaborate criminal deception? Think Cary Grant in To Catch a Thief, or Pierce Brosnan in the first season episodes of Remmington Steele, where plot suspense feeds into the sexual tension between women who aren't quite how far to trust, and the former thieves who purport to be now on the straight and narrow.

In Tamara Morgan's new heist romance, Confidence Tricks, it isn't just the hero, but also the heroine, whose motives are under suspicion. Neither Poppy Donovan, recently paroled con artist, nor Asprey Charles, rich boy turned sneak-thief, is at all inclined to trust the other. Asprey and his partner, after all, have just stolen the necklace Poppy's latest mark gave her, the necklace she intended to use to bankroll one last con. And Poppy (while in disguise as a rich man's bimbo), did actually dislocate Asprey's arm with her ninja moves when he tried to relieve her of said necklace, never mind nearly pierce his jugular with her pointy-heeled stiletto. But when Poppy tracks Asprey and his siblings down post-theft (not very difficult, since she lifted his wallet while he lifted her necklace), and discovers that the necklace he stole was a fake, she sees no alternative but to blackmail the Charles family into helping her fleece the scumbag who conned her now-dead grandmother out of all of her savings. Even if they might be the worst criminals on the face of the planet.

Cons and thefts require intelligence, an intelligence that often translates into quick-witted repartee, one of the central pleasures of the romantic heist story. Charming Asprey "had learned early on that it was just as effective to diffuse a tense situation with humor as it was with his fists" (Loc 2665); despite her wary nature, Poppy cannot help but be amused by a man who cries "Spork!" when she grabs his bad arm in another ninja hold ("It's my safe word.... You know—functional yet innovative? I hate to brag, but I've been told I'm a little of both" [Loc 300]). But Asprey's not the only one with an advance degree in bantering:

"Is this the residence of Asprey Manchester Charles, six feet tall, one hundred and eighty pounds? Isn't that cute... you're wearing the same too-tight vest in your picture. Do you always dress like you've been kicked out of a wedding?.... You really should check the donor box on your ID, you know.... It can be really hard for a family to make that kind of decision on their own." (Loc 349).

As each spies on the other, cleverly infiltrating each others' spaces, bent on "proving who had the upper hand" as they decide whether to join forces or keep their distance, the stakes continue to grow. And Poppy isn't the only one feeling that "the bigger consequences only increased her excitement" (Loc 1494). Heightened stakes lead to heightened feelings; as scientists have known since the 1970s, the physiological symptoms of anxiety or tension can easily be displaced, making those in danger feel as if they are sexually aroused by the person they are with when they experience the threat.* Scientists term this "misattribution of arousal," yet in the world of popular romance, such arousal far more often leads to lasting love than to disappointing sexual encounters.

Such a happy ending feels earned, rather than just genre-given, in the case of Confidence Tricks. The depth of characterization Morgan layers over the flatness of the typical caper yarn protagonists makes Poppy and Asprey's romance feel less like a plot-destined inevitability, and more like the meeting of two complimentary human beings. Like robbery and romance, good-time boy Asprey and clever con artist Poppy may appear to have little in common at first glance. Yet despite the book's unexpected (and not entirely satisfying) final twist climax, its sweet-tart denouement proves that a Poppy-Asprey partnership has lasting potential. 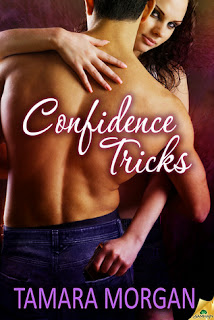 "It wasn't very feminist of her, but Poppy would be the first to admit that a large portion of her success in any con situation was thanks to the innate reserve most men carried against harming a woman. It was a reserve composed of equal parts deference and disbelief. Deference to her vagina; disbelief that said vagina was anything but a handicap in life." (Loc 460)

I don't know—sounds feminist to me...