The Pleasures and Perils of Succumbing to a Rake: Barbara Samuel's LUCIEN'S FALL

Ruined by a Rake. Bargaining with a Rake. To Refuse a Rake. Just the first three of over 1,500 titles that pop up if you type the word "rake" in the title line of amazon.com's advanced search feature. The popularity of the rake lies in its promise to potential readers, holding out the chance to vicariously share pleasures of bad boy behavior, and to be on the receiving end of the purported "experience" garnered by the rake's forays into sexual decadence. Yet the "rakes" in such novels hardly ever live up to the full historical definition of the title: when the word first came into the English language in the 15th century (by way of the slightly earlier rakehell), it was used not only to describe "an idle dissipated man of fashion," but also "a man of loose habits and immoral character" (courtesy of the OED). Today's romance rake hardly ever behaves immorally during the course of a novel (unless one counts having sex with the heroine as immoral). Sometimes, he might have been bad in the past; far more often, any reputation for cruel or selfish behavior stems not from actual acts, but from malicious gossip, or from lies told or truths unsaid to guard or protect someone else. Our contemporary romance rake is far more of a rascal than the selfish, lust-driven man bent on his own pleasure, no matter the cost to others.

To come across an actual rake in a romance novel, then, struck me as a refreshing treat. To find him, I had to delve into a popular author's backlist, just being reissued in e-book format. I'd read and enjoyed Barbara O'Neal's contemporary women's fiction, but hadn't read any of her earlier romances written under the names Barbara Samuel and Ruth Wind. The first of her Barbara Samuel romances to final for the RWA's RITA award (she's won a remarkable seven overall), 1995's Lucien's Fall portrays "a rake and a virtuous beauty, who are both the quintessential types of these characters and individuals of rare depth, individualism, and self-awareness," Heroes and Heartbreaker columnist Janga wrote, a description that proved enticing to this historical fiction devote. So, even though it doesn't include the ubiquitous "rake" in its title, I purchased and downloaded Lucien's Fall with eager anticipation.

From the opening words of her novel, Samuel wants her readers to know that her hero, the estranged only son of the Earl of Monthart, is a rake: "Lucien Harrow was drunk. It was not uncommon. In his set, to be sober at three of a muggy early summer morning would have been a far more unusual occurrence" (Loc 28). Yet what follows—a description of Lucien madly writing down the music he hears in his head, then burning it before finally falling into sleep—suggests that Lucien's drunkenness serves not only, or perhaps not even primarily, as pleasure. Lucien, then, embodies the archetype of the tormented rake that would haunt historical romances during the 1990s: a rake, yes, but one who uses self-gratification to keep other, more disturbing feelings at bay.

Invited to a house party by lusty widow Lady Juliette, Lucien is immediately attracted to the countess's step-daughter, Madeline. Juliette makes it abundantly clear that Lucien is not to pursue the challenge her step-daughter presents, for she's intended for another. Though his best friend Jonathan is currently carrying on an affair with Juliette, an affair in which Jonathan's heart seems to be at risk, Lucien has no scruples about deploying his seductive arsenal on both women:

God, it was too perfect! As he met that [Juliette's] avaricious gaze, Lucien made up his mind to seduce the girl. What rake worthy of the name could resist?
.... Yes, he would seduce Madeline, under the watchful eye of her guardian, and meanwhile let Juliette think he was intent on seducing her.
It might be his most splendid adventure to date. (Loc 325)

Lucien spends the first section of the novel cynically working his wiles on Madeline: he watches her incessantly; he joins her in her favorite pastime, gardening; he breathes flirtatious compliments and teasingly seductive poetry in her ear at every opportunity. He even tells her that he loves her (though of course he doesn't). Madeline, though a virgin, is no unworldly innocent: "Madeline had long been acquainted with the habits of rakes. At fourteen, this sort of insolent and knowing smile had turned her knees to mush. At twenty, she was beyond melting under the gaze of any man—even one who was, she had to admit, quite compelling" (Loc 153). She recognizes Lucien's game, and and openly tells him she knows what he's about. "Don't play the doomed man with me.... I lack the energy or the interest to save you." 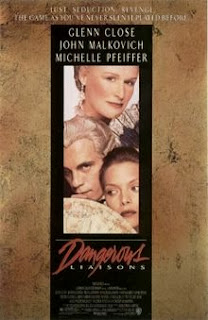 Lucien realizes to succeed, he must change his tactics; only by allowing Madeline to see his vulnerabilities—the passionate music he has eschewed; the pain he experienced as a overwrought young man, laughed at by his older lover—does he have a chance of seducing her. "Yes, music would woo her to his bed—even against her own will. But could he do it? Could he twist even that to his lust? Was he willing to sacrifice his last holiness? He knew with utter certainly that it would also destroy him. And that he would do it anyway" (Loc 2262). Lucien may be beginning to feel more than lust for Madeline, but like Valmont and Madame Merteuil in Les Liaisons Dangereuses (1782) Lucien can even deploy his true emotions to manipulate the people around him.

Lucien's Fall evokes not the current crop of rascally rake romances, but instead the intense, all consuming passion of late 17th century and early 18th century amatory fiction, stories of rakes overpowered by their love/lust then seducing or overpowering the objects of said feelings. In books such as Eliza Haywood's Love in Excess (1719) (an immensely popular English novel, outsold only by Defoe's Gulliver's Travels and Robinson Crusoe in its day), passion is overwhelming, beyond the control of either lover; it cares not what damage it does to those around it, even to the lovers themselves.

Why would a feminist romance column feature a book about a real rake? Because while Lucien's Fall ends happily, it does not shy away from portraying the harm, as well as the pleasure, that results when people allow passion to overcome all scruples. The friendship between Lucien and Jonathan is damaged; the romance between Jonathan and Juliette smashed; the heart of Madeline's intended, a kindly marquess, is broken; the love between Madeline and her step-mother Juliette is questioned. Some of the damage may be repaired; some will not. While Samuel rewrites the tragic ending common to amatory fiction, she does not shy away from sugarcoating the pain that the overwhelming passion that draws so many readers to the romance genre often leaves in its wake.

What other historical romances feature heroes who are rakes in more than name only? Who actually act in cruel or selfish ways during the course of the novel, rather than in the distant past? Or do you find such heroes so unappealing that you wouldn't want to read about them?
Posted by Jackie C. Horne at 9:00 AM